Baptism of fire for the GT001-R, and it reaches the finish…

With only a few hours of test runs under its belt, the VDS GT001-R entered by the VDS Racing Adventures team headed off for the United Arab Emirates to compete in its first ever race, namely the 24 Hours of Dubai. 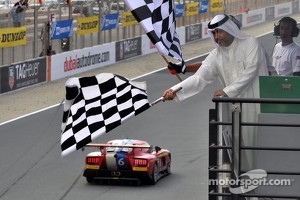 Twenty-four hours later the Belgian muscle car crossed the finish line, true to the Raphaël van der Straten team tradition. It goes without saying that the score was not perfect, but that was not the main objective… “

Our final classification was not exceptional, but something we must retain from this first participation, is our presence at the finish, and the vast amount of data that our team gathered from it, Raphaël explained.

The participation of this VDS was a true Première. Not only because this GT001-R had only completed a few hours of circuit testing prior to this event, but also because people who had never worked hard together got to know each other and to perform as a team.

Obviously the members of the VDS Racing Adventures team, but also Tony Gillet’s men, and mechanics from the Ellegi Motori company. And it worked perfectly, which is a major delight …”

“For a car that only had its first run last October, the fact that it finished the race is a first great reward, José Close interceded, who was acting as the team-manager.

But there is obviously more work to be carried out. The car had its teething problems, but more importantly it showed great potential. Highly promising for things to come.” 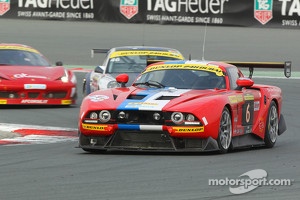 It was essentially wheel rim problems that cast a doubt within the VDS Racing Adventures team. “ I was behind the wheel when one of the rear wheel rims broke, Raphaël continued.

And I stopped some … 20 centimetres from the wall! We checked the other rims just to be on the safe side and discovered several cracks. We will be sending everything back to the manufacturers so that they can review matters.

As for the rest, we were obliged to replace the gearbox, as one of the teeth had broken as the result of the shocks brought about by the gear changes with the paddles on the steering wheel.

This took time, because as with many other things, we wanted first and foremost to fully understand, in order to prepare for the future.

We also took advantage of this intervention, and others, to replace various mechanical parts purely as a preventive measure, in order to check their resistance.

And we were not able to pinpoint any other fundamental problems. Which clearly is a good sign. I would also like to mention the fact that our engine power was set at its minimum in Dubai, as the Maserati unit was only developing 465 bhp.

It can obviously develop far more, but the essential for us was to drive as long as possible in order to gather a maximum amount of information. Here also mission accomplished … »

The VDS GT001-R will be back in Belgium during mid-February. Raphaël van der Straten’s team will then dismantled the car completely, in order to check every component.

A further series of tests will then be on the programme. If everything works out fine the 12 Hours of Hungary, to be held on 5th and 6th April, will also be on the menu.

By then the VDS will have clocked up hundreds of kilometres, but its power of attraction will be as strong as ever, as the entire team came to appreciate in Dubai. No, the GT001-R leaves no one indifferent…