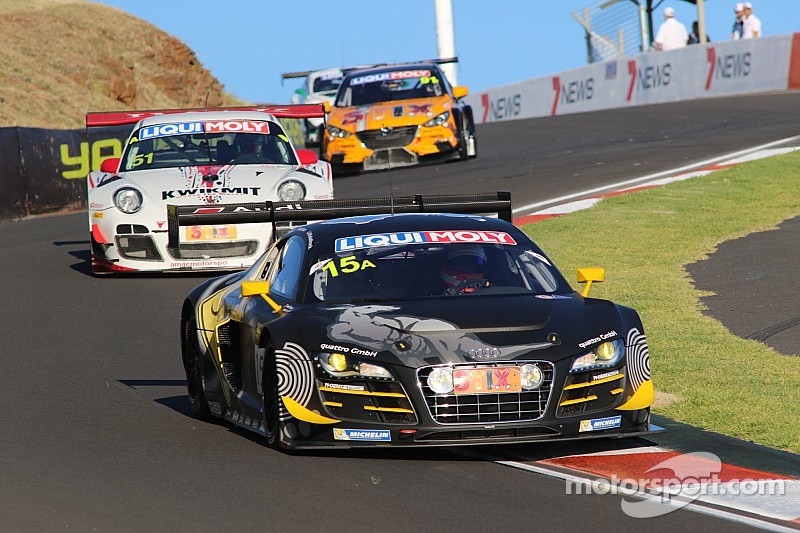 They never really went away, but there’s no doubt that Audi are properly back in contention for the Liqui-Moly Bathurst 12 Hour this year.

Tomorrow he will share his car with Italian GT ace Marco Mapelli and former F1 driver Markus Winkelhock – but today the Mountain was the 23-year-old Belgian's playground as he set the fastest ever officially recorded lap of the 6.213km circuit.

The ones to beat

After a subdued performance last year where the cars rarely looked like contending for the outright victory, today’s performance has clearly re-established the most successful brand in Bathurst’s GT era as the ones to beat when the 12-Hour race beings at 5:50am local time tomorrow.

The race will be broadcast in its entirety on the Seven Network tomorrow, the broadcast commencing at 5:30am local time on 7mate.

Five brands ended qualifying in the top five with Lamborghini, Nissan, Ferrari and Aston Martin next on the grid for tomorrow’s race.

JBS Racing driver David Russell led the early running in the final qualifying session and for a time his impressive 2m03.1751s lap looked to be unsurmountable – at least until Vanthoor’s stunning lap towards the end of qualifying.

Russell and co-drivers Steve Owen and Roger Lago will start tomorrow’s race from the front row in the best ever qualifying performance from a Lamborghini in Liqui-Moly 12-Hour history.

The contrast in the front row is notable with the works powerhouse Phoenix Racing team from Germany to line-up alongside the tiny part-time Lamborghini team from Brisbane’s inner suburbs in Queensland.

The factory-backed Nissan GT-R NISMO GT3 will start third thanks to an impressive time from young Japanese star Katsumasa Chiyo – though his efforts ended soon after setting his 2m03.2974s lap when he made contact with the Cutting wall.

Chiyo lost the rear of the GT-R mid-corner and touched the concrete barrier, limping back to pit lane where the car remained for the final 10-minutes of the session.

One of the hero cars from last year, the McLaren had suffered from electrical issues for much of the weekend however an overnight engine change and hard work from the crew allowed their star import – factory McLaren driver Kevin Estre – to haul the car into the top-10.

In the class battles

The Canberra team ousted the defending class champions – Grove Racing – by just 0.3s despite the Grove car having topped all five practice sessions in the lead up to qualifying.

Another Aussie-built car led the way in the Recaro Class I (Invitational Non-Production) standings with the No. 31 MARC Cars Australia Ford Focus heading the charge.

The Liqui-Moly Bathurst 12 Hour 2015 is proudly supported by the NSW Government through its tourism and major events agency Destination NSW.

Laurens Vanthoor: “I was very happy, it was tough in the beginning but we knew the speed was there. We had the group qualifying with some problems with traffic with people coming out of the pit lane, so I was very happy to have a free lap at the end and put it all together and it was a nice moment to have pole here at Mount Panorama. Of course qualifying for such a big race is just a small point but it is a good point to start the weekend. I expected a low ‘three’ would be impossible this morning but the 2.25 was not what I really expected, with qualifying though you push everything and I almost put the car into three pieces a few times, so it was worth it, it was really challenging.”

Markus Winkelhock: “This year seems to be much better, the car is feeling great, I feel confident in the car and am looking forward to driving in the race. We have a very experienced team in Phoenix behind us and I think we have a good chance for the race for tomorrow.”

Marco Mapelli: “It is nice to be back at the Mountain and with Phoenix, it is a hard track for sure, but we are looking forward to tomorrow’s race. I think we have a strong driver line-up and each of us are very close, which should help us tomorrow.”

David Russell: “We are happy with second, for us in that first qualifying session track density is a problem so we went out and did minimum laps and just got a read on the car – using it more as getting prepared for the second session. For us as a smaller team, I am happy obviously to be in the top three, and to be in contention for pole is sensational. For us we had a decision to make during that session, all was going well and we brought the tyres fairly up to speed but then something happened and we weren’t 100% happy.

We finished on a ‘3.1’ and I said to the guys when we came in that it’s a bit of a risk versus reward situation - if we had gone back out we could have gone faster for sure but we certainly don’t have the infrastructure around us to go and make a mistake. It is at the forefront of our minds to worry about the race, it is great to be in P2 for the start, but we are more so worried about tomorrow afternoon rather than tomorrow morning.”

Roger Lago: “The last few years has been tough for us, especially last year with the kangaroo. We are only a very small team – a few guys are mates and a few guys are mechanics. The guys have done a good job, the crew has done a great job, Steven hasn’t really had much of an opportunity to punch some times out, so you watch him tomorrow. These guys aren’t mugs, they do it for a living and they do it for a reason, so it is tough for me to keep my end of the bargain up! There are a few unseeded guys there that maybe aren’t unseeded but that’s okay, they have played by the rules and they are the rules for this year.”

Steven Owen: “We need to stay out of trouble tomorrow, there are some fairly slow cars out there so that is always tricky. The car has speed and we are looking forward to the 12 hour and seeing how we go against those unseeded blokes. Yeah I am feeling comfortable, this isn’t my first Bathurst and I have had the opportunity to drive the car a few times now and work with the team a couple of times now, there is some great new engineering talent on board with the car, it is a small team but it is a quality team.”

Katsumasa Chiyo: “It is my first time in P3 of this race. I heard that we were P2 and to keep pushing and I did but I made a mistake coming into turn four, suddenly the rear came around and I couldn’t control it. So I am so sorry for the team because they have been working very hard, but I hope to drive at my best tomorrow. I am looking forward to the 12 hour race.”

Florian Strauss: “So far we have had an awesome weekend, today was one of the most exciting days so far. It is looking promising, and we are happy with the top three qualifying result. Chiyo did a really good job and the car looks pretty repairable, so it will be nice and shiny ready for tomorrow.”

Wolfgang Reip: “We have a good package, we are all there very close in lap times. Now we are focused on tomorrow’s race and I am really happy to be back here because last year we didn’t get very many laps and this year seems much better, I am very excited about tomorrow.”