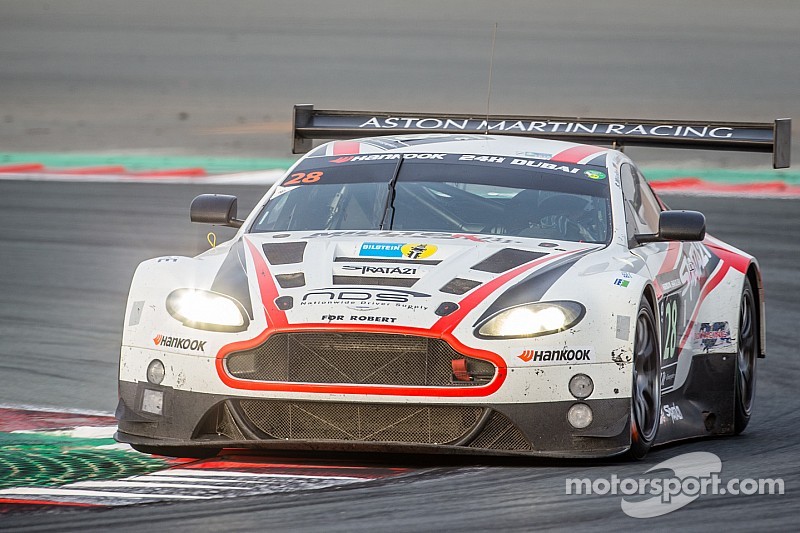 The 6.0-litre V12 machine was piloted by Aston Martin Racing works drivers Stefan Mücke (DE) and Jonny Adam (GB), and experienced endurance racer Paul White (GB). Together they qualified in sixth place and the team, which had never run the car before this week, completed 596 laps of the circuit, setting the fastest lap of the race in the process.

After 24 hours of totally reliable running, at times leading the race, the car crossed the line in fourth place overall and third in the PRO class.

To stand on the Dubai 24 Hours podium is something I’m very proud of,

“We’re really pleased to have been on the PRO class podium,” commented Mücke. “The car has felt great all week and the team did a really good job with set-up to get it spot on. If we had not had to pit an extra time for damage due to contact, I think we may have finished higher but, in a race with 95 cars on track, these things happen.”

Dubai 24 Hours is the opening round of the 24H Series and this year celebrated its tenth running. The race, which sees up to 96 GT and touring cars compete in high temperatures and up to 13 hours of darkness, is regarded as one of the most challenging endurance races in the world.

“To stand on the Dubai 24 Hours podium is something I’m very proud of,” commented Adam. “I’ve driven the Vantage GT3 since the end of 2011 and I’ve been a part of a lot of its firsts – including its first race win back in 2012 and its first championship win back in 2013 – so any I take any opportunity I can to add to its growing tally of successes.

“When we first drove the car on Wednesday, Stefan, Paul and I were very pleased with it but, after some pre-qualifying tweaks from the guys at KPM Racing, who did a great job all week, we were extremely happy.”

White, who was regularly setting laps as quick as the professional drivers, added: “What a great result for KPM Racing! They are such hardworking professionals who I have raced with for more than a year now and they deserve this podium more than anything.

“I’d also like to thank Stefan and Jonny for being great team-mates and all at Aston Martin Racing, especially Luigi our engineer, for helping us achieve this.”