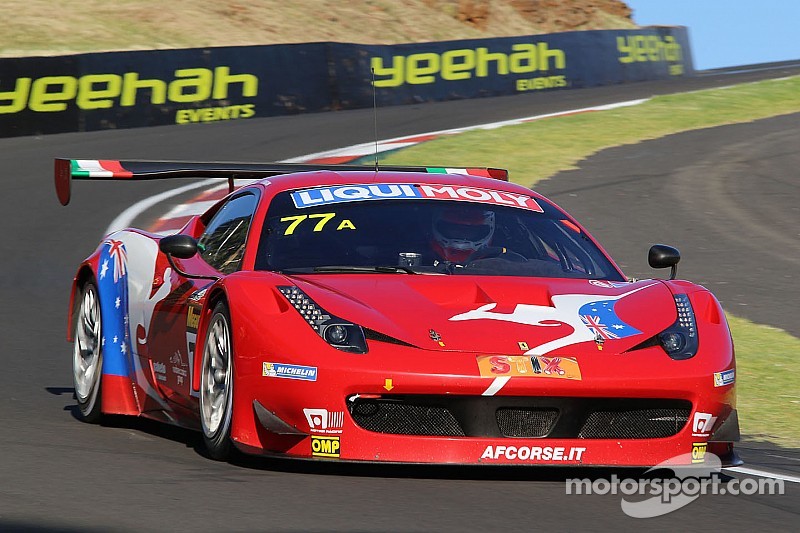 Audi dominated early, but its Ferrari in control at the three-hour mark.

After dominating early, the No. 15 Phoenix Racing Audi currently runs third, trailing a duo of Ferraris in the 12 Hours of Bathurst. 71 laps were completed when we hit the three-hour mark and three full-course cautions have taken place.

Michele Rugolo leads in the No. 77 AF Corse Ferrari 458, roughly 20 seconds ahead of another Ferrari, being the TFM-run No. 27.

The race started just prior to the sun rising, the track still in darkness as 50 GT cars roared to life. The first full-course yellow came within the first hour, taking place after a Class D BMW had an unfortunate coming together with one of Bathurst's notorious kangaroos. The No. 42 retired from the race following the impact.

The second caution came when the No. 14 Class B Porsche got stuck in the gravel off the exit of Hell corner. The next safety car deployment also had to do with Porsche ... Two Porsches to be precise. The No. 51 Class A and No. 66 Class B entries came together at Forrest Elbow. While leading, the No. 15 Audi sent the No. 6 Porsche into the wall after an aggressive move to the inside.

There have been a number of minor incidents including two Lamborghinis both going for spins in the Chase, but at different times. The No. 52 Aston Martin has gone for a couple spins itself, as have one of the members of the Bentley fleet (No. 8), doing so on cold tires. A sister Bentley (No. 11) also got turned in a separate  incident but continued.

The No. 4 Grove Group Porsche leads the way in Class B, with the No. 54 Lotus Exige Cup R on top in Class C, the No. 65 Daytona Sportscar Coupe leading Class D, and the No. 91 MARC Mazda 3 V8 heading the Class I non-production class.