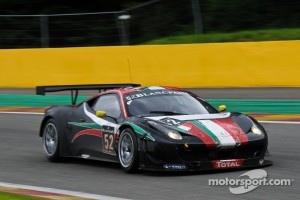 More success for the AF Corse team who were tackling the Spa 24 Hours this weekend, the fourth round of the Blancpain Endurance Series. After an important win at Le Mans (LMGTE PRO,) the team run by Amato Ferrari today added another trophy to its already ample collection with victory in the PRO-AM class of the classic endurance race in the Ardennes.

The Ferrari 458 GT3 in the hands of Andrea Bertolini, Niek Hommerson, Louis Machiels and Alessandro Pierguidi got the upper hand over the Porsche of Haribo Racing Team (second in class and seventh overall) and the McLaren of Von Ryan Racing (ninth and fourth in the category) at the end of an action packed race, affected by changing weather and no less than 16 appearances from the safety car. Third step of the podium for the Ferrari entered by Sofrev ASP for Olivier Panis, Eric Debard, Morgan Moulin Traffort and Olivier Barthez, the latter being the former French team goalkeeper.

The Italian team had aspirations to take the top two places but an off track excursion put an end to that for the 458 driven by Gaetano Ardagna, Daniel Brown, Giuseppe Cirò and Toni Vilander, who had to retire in the twenty third hour.

The next round of the Blancpain Endurance Series takes place at the Nurburgring on 22 September.

Strong performance for Reiter Engineering at 24 hours of Spa