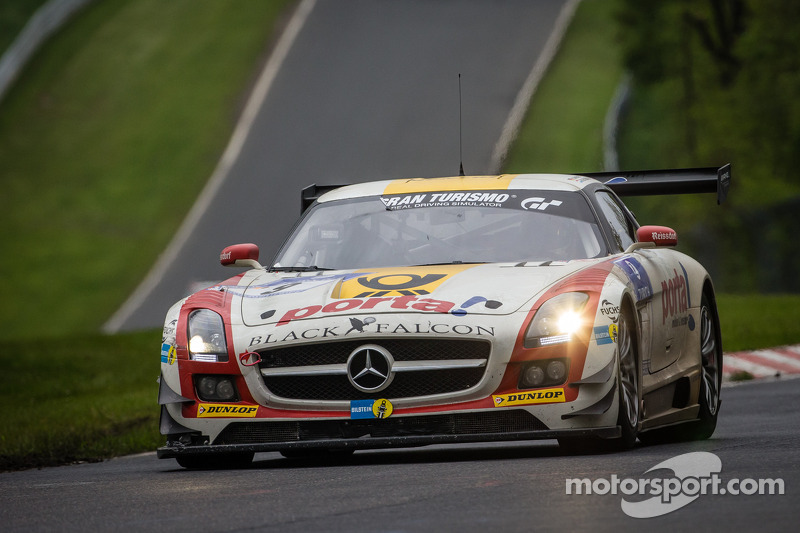 The 41st ADAC Zurich 24h Race will make it into the motor-racing record book as the shortest but one of the most eventful editions in the history of the legendary endurance race.

In front of a huge crowd around the Nordschleife, 180 cars went out on the track on the Whitsun weekend to battle it out in the 24h race that was won – for the first time – by a Mercedes-Benz team, in the end: Bernd Schneider, Jeroen Bleekemolen, Sean Edwards and Nicki Thiim with their Mercedes-Benz SLS AMGT GT3. 210,000 visitors witnessed an eventful and action packed race that unfortunately had to be suspended on late Sunday evening.

For Bernd Schneider, the shortest 24h race in the history of the event – the victorious team completed 88 laps in 14.5 hours – was a dream come true. “In my career I won nearly everything I wanted to win,” said the German afterward. “Only in this race, I failed to make it to the chequered flag every single time, to date.”

In addition to being delighted about his win, Schneider also was happy for his team-mate Jeroen Bleekemolen who left the Nürburgring early. “Several wishes are fulfilled in the Team Black Falcon, today. Jeroen is on the way to becoming a father and I and Black Falcon tied in with our success in the 2013 Dubai 24h Race by also winning here at the Nürburgring.”

Meanwhile, the members of the BMW Sports Trophy Team Marc VDS also were virtually over the moon. With a stunning final spurt, Maxime Martin worked his way up to second position, thus demonstrating that he is one of the fastest Nordschleife drivers.

Aston Martin stuns in the first half of the race

The first half of the race was dominated by the fascinating battle between the Aston Martin works squad – that started into the race from second position on the grid – and its opponents representing the Audi and Porsche camps.

James Bond actor Daniel Craig himself was on site to cross his fingers for the Aston Martin Vantage GT3 that was raced by Darren Turner / Stefan Mücke / Allan Simonsen / Pedro Lamy who delivered in outstanding style, on the occasion of the British brand’s 100th anniversary.

In the end, however, they had to settle for finishing 10th. “We nearly were somewhat amazed by the strong performance,” Stefan Mücke said after the race. “Particularly in consideration of the fact that there were so many far more experienced teams on the grid.

In the end, we couldn’t secure a better result as we weren’t able to make full use of the car’s potential this morning in the wet. In addition, Pedro Lamy had a short off-track moment and afterwards, the balance wasn’t quite as good as it had been before.

Nonetheless, our conclusion is positive: we wanted to make it to the top 10 and achieved this goal.” In the first hours, the works Aston Martin and two Phoenix Audis formed the leading trio but short before the race was red-flagged, two Porsches 911 GT3 passed the Audis R8 LMS ultra of the Meuspath based team for second and third positions. Porsche driver Timo Bernhard: “Holding such a great position prior to the red flags was really nice.

Thanks to a good strategy we had made a stop less and could gain a lot of ground, this way. The decision to suspend the race was absolutely right as the conditions were incredibly difficult.

Then, on Monday morning, we made the wrong tyre choice – we had expected more rain. But if you want to make it to the top you just have to take some risks.”