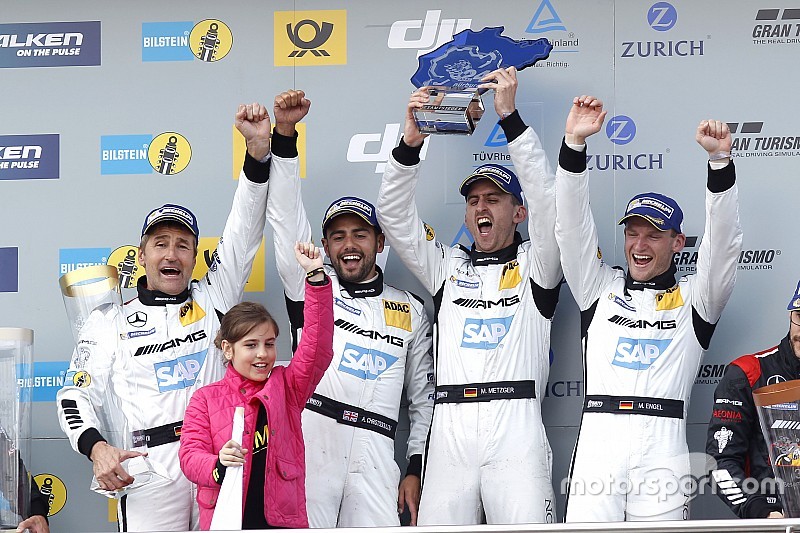 The Mercedes-AMG GT3 had a perfect debut in the Nürburgring 24-hour race. The teams that ran the new customer sports car for the first time in the classic endurance race in the Eifel secured a historic victory including a clean sweep of the podium for the brand and a total of five cars finishing in the top six. In the race, marked by extremely changeable weather conditions, drivers, teams and cars equally shone with a consistent high performance level, huge reliability and good race strategies.

Prior to the start of the race, Maro Engel (GER) had already caught the attention by taking the maiden pole position for AMG in the Nürburgring 24-hour race with the #9 car of the AMG-Team Black Falcon. Freak weather conditions had their effect on the opening stages of the race on Saturday afternoon as a hail storm caused an interruption of the race for several hours. After the restart, AMG Performance Teams quickly established themselves in the group of the front-runners in the field that included over 150 cars.

When the night set in and the track dried out more and more, the Mercedes-AMG GT3 teams had a quintuple lead for the first time. The remainder of the race saw thrilling duels and numerous lead changes. On Sunday morning, a quadruple lead of the Mercedes-AMG GT3 cars had been established, in which the race leader, the Haribo Racing Team-AMG’s #88 car, was able to pull a slight gap. A yellow-flag infringement and the subsequent time penalty then prevented a possible win for Maximilian Götz (GER), Lance David Arnold (GER), Uwe Alzen (GER) and Jan Seyffarth (GER).

In the thrilling finale, the #29 car with Christian Hohenadel (GER), Marco Seefried (GER), Christian Vietoris (GER) and Renger van der Zande (NED) and the #4 entry with Bernd Schneider (GER), Adam Christodoulou (GBR), Manuel Metzger (GER) and Maro Engel (GER) alternated in the lead. The final two laps turned out to be the exciting highlight: after a ‘splash and dash’ fuel stop just a few minutes before the duration of 24 hours was completed, final driver Hohenadel initially held on to a tiny lead from Engel. With a last-gasp overtaking move, Engel then took the lead and went on to drive victory for the AMG-Team Black Falcon home after 134 laps. With a gap of 5.697 seconds, the closest finish in history of the 24-hour race, Hohenadel followed to finish second for the AMG-Team HTP Motorsport. One lap down, Uwe Alzen drove the #88 HARIBO Racing Team-AMG car to third place.

Tobias Moers, Chairman of the Board of Management of Mercedes-AMG GmbH: “I am really happy with this magnificent quadruple victory of our new Mercedes-AMG GT3 in this certainly unique 24-hour race. For me, the tension after these extreme racing conditions and the absolutely electrifying finale is now also coming off my shoulders. I am also proud of the fact that we have provided motorsport action at its best and a perfect show for all the fans. Many thanks to all our teams, drivers and those involved in this success.”

Jochen Bitzer, head of AMG Customer Sports: “First of all, we are all extremely happy with the clean sweep of the podium and the two further top six results. Last year, we had already set ourselves the goal of winning here with our new Mercedes-AMG GT3 in 2016. Now, we have delivered, and more than that. To achieve this, we have launched a new concept with the AMG Performance Teams and gone through an intense preparation. It all worked out. I am also happy for the fans who got to see a great race.”

Christian Hohenadel, AMG-Team HTP Motorsport #29: “At the end of the day, we have lost the 24-hour race on the final lap, but basically, we are all winners, first and foremost Mercedes-AMG that has built a great car. My team has also won, because it has done an excellent job in preparing the Mercedes-AMG GT3. Coming second with such a small gap is hard, but all in all, we have realised our goals. It was an incredible race.”

Maximilian Götz, Haribo Racing Team-AMG #88: “Third place was a goal, but we were up front for a long time, leading the race. Then, we incurred a time penalty of one minute and 32 seconds. When you take that into account, we certainly would have finished second and perhaps could have been in contention for victory. But that is the way it is and now, we are third. It was a thrilling finale. Congratulations to Mercedes-AMG for a great job.”

Dirk Müller, AMG-Team Black Falcon #9: “What an incredible race, I just can’t believe it. I am a little bit sad as we are in fourth place, a podium finish would have been the icing on the cake. Congratulations to our #4 crew, but also to HTP Motorsport, who would have deserved victory, too. A great performance by all AMG teams. And now it is time to party.”

Sebastian Asch, Mann-Filter Team Zakspeed #75: “I had to keep control of my nerves on the final lap as so many things can happen. We still made up one place during the final stint. Our plan with the pit stops worked out and we finished in sixth place. We lost time during the night, but were then able to keep up with the others again and made the best out of it.”"

The positions* at the finish:

* subject to confirmation by the organisers

Audi experiences disappointment in the Eifel