24 Hours of Spa started with a six hour sprint 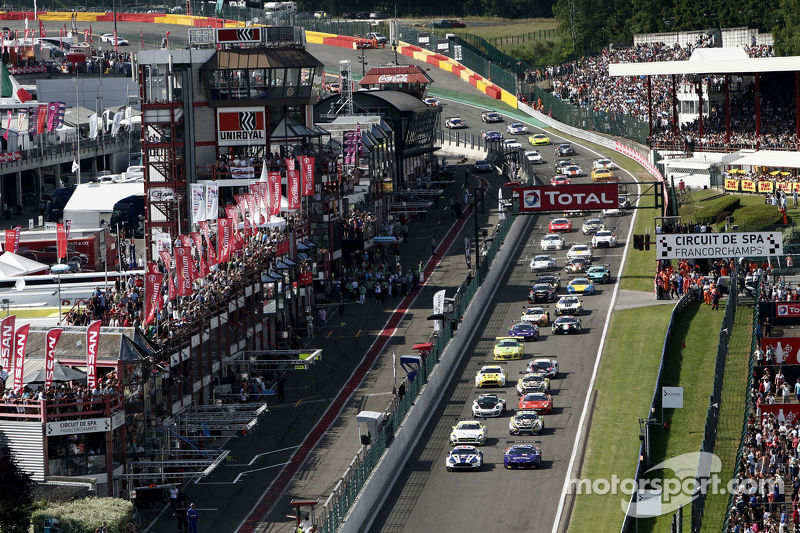 The penultimate round of the Blancpain Endurance Series, looked like a true sprint race with several different in the first six hours on the Spa-Francorchamps circuit.

The first six hours of the 65th edition of the Total 24 Hours of Spa, the penultimate round of the Blancpain Endurance Series, looked like a true sprint race. There were several different leaders, the result of magnificent duels on the Spa-Francorchamps track. The BMW Z4 #4 of the Marc VDS Racing Team (Nicky Catsburg, Henri Moser, Markus Palttala) is leading the Pro-category. Niek Hommerson, Louis Machiels, Andrea Bertolini and Marco Cioci (AF Corse Ferrari 458 Italia) are first in PRO-AM and the SOFREV ASP Ferrari 458 Italia (Jean-Luc Blanchemain, Patrice Goueslard, Fred Bouvy) is leading the Gentlemen Trophy.

At 16:30, in front of packed grandstands and under hot sunshine, Stefan Mücke and his Beechdean AMR Aston Martin Vantage GT3 #99 led the pack through the first corner. Alessandro Pier Guidi (SMP Racing Ferrari 458 Italia), second on the grid, spun his car at Eau Rouge, but without touching any of the other competitors.

The race was neutralised after the crash of Alex Buncombe (Nisan GT Academy Team RJN - Nissan GT-R Nismo GT3) at Raidillon. After ninety minutes another car crashed at the same spot, the Blancpain Racing Lamborghini LP560-4.

The two safety car interventions that followed meant that the strategies of several of the protagonists in the race were no longer in sync. That meant that the HTP Motorsport Mercedes SLS AMG GT3 #84 could briefly take the lead.

After three hours of racing the picture in front became a little clearer. The Marc VDS Racing Team BMW Z4 #3 and #4 took on the Manthey Racing Porsche 997 GT3-R #150, but the #84 Mercedes and its different strategy was never far away.

Because of quicker pitstops and by doing stints that were one lap longer the BMW #4 of Nicky Catsburg, Markus Palttala and Henri Moser scored full points after six hours, in front of the Porsche #150 and the BMW #3.

In the Pro-Am category, which early on was dominated by the Aston Martin of Stefan Mücke, the consistency of Niek Hommerson, Louis Machiels, Andrea Bertolini and Marco Cioci (AF Corse Ferrari) was rewarded with full points after six hours of racing.

The Gentlemen Trophy saw some driver changes as well. The Kessel Racing Ferrari 458 Italia #111 briefly took over the lead of the Sport Garage Ferrari #52, before it lost some time because of a puncture. That meant that it was the SOFREV ASP Ferrari #20 that was leading after six hours, in front of the Ferrari’s #52 and #57.

Meanwhile, the race continues and some rainstorms are expected during the night.

Henri Moser, BMW Z4 #4, Marc VDS Racing: “Our strategy is different than the one of the BMW #3, because we only drive simple stints. We satisfied with the result, because after six hours we scored full points. The other car of the team was in the top-3 as well. At the moment it is very hard to cope with the traffic, which explains the ever changing gap between the cars.”

Bernardo Serra, Team Manager, Ferrari 458 Italia #50, AF Corse: “We focussed on our top drivers in the opening hours of the race. Niek Hommerson drove a great stint, which gave us the lead. We pushed our strategy to the limit, by taking our pit stop just after the six hour mark.”

Jérôme Policand, Team Manager, Ferrari 458 Italia #20, SOFREV ASP : “Our strategy was very aggressive during the opening hours. Frédéric Bouvy and Patrice Goueslard drove long stints, to obtain a good position. Now it is up to Jean-Luc Blanchemain and Jean-Luc Beaubelique to drive. When it starts raining, Bouvy and Goueslard will take to the track again.”