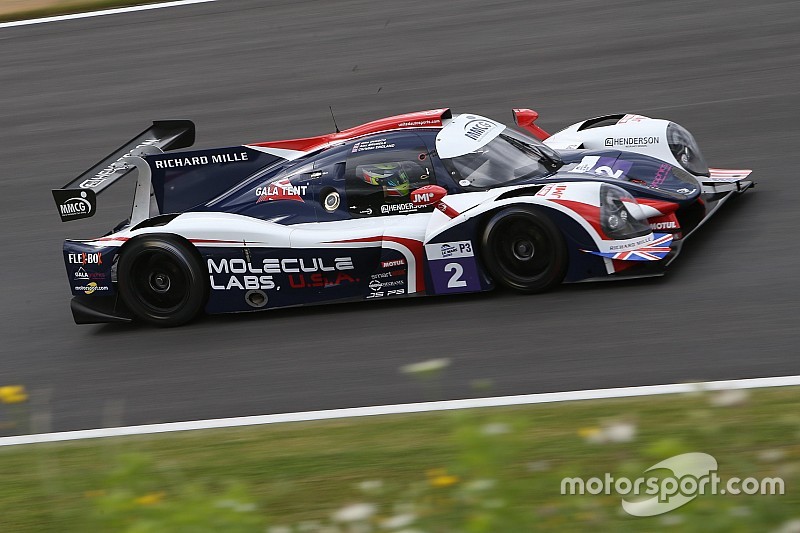 Having made a dream start to its maiden European Le Mans Series campaign in the LMP3 sports-prototype category, United Autosports heads for the fourth round of the series at Paul Ricard in Southern France aiming to consolidate its healthy points advantage in the Team’s & Driver’s championship standings. The Anglo-American outfit’s brace of Nissan-engined Ligier JS P3 sports-prototypes start the 4 Hours of Le Castellet on Sunday (28 Aug) with a 100% winning record, United leading the Team’s championship by 25 points at the midway stage of the series.

Victories at Silverstone, Imola and most recently the Red Bull Ring have earned the #2 Ligier of Alex Brundle/Christian England/Mike Guasch a championship lead of 33-points while the sister car of Matt Bell/Wayne Boyd/Mark Patterson lie seventh. Having started the last two races from the front row of the LMP3 grid, the #3 Ligier has suffered dire luck in the Imola and Red Bull Rings races, punctures effectively ruining the car’s race chances.

Bell, Guasch, Patterson all have previous track experience from United’s 2010 maiden GT3 programme while Brundle also has race knowledge of the fast and sweeping 3.64-mile track near Marseille. The 4 Hours of Le Castellet marks the only race of the ELMS season that is on home soil for Onroak Automotive, the Magny Cours-based designers and constructors of the Ligier chassis. United Autosports is the UK agent for Onroak Automotive where prospective and existing customers can enjoy the convenience of purchasing the Ligier LMP3 and CN sports-prototypes in the UK. United Autosports also offers a parts service with dedicated team personnel to liaise with customers and can provide trackside support service to customers.

Alex Brundle (GB): “We’ve had a great season and I hope we can keep up the great form at Ricard. Although it is marketed as a high-tech test track, the circuit is a great venue for racing and I believe the actual layout is one of the fastest and most exciting on the calendar. The first sector is a technical challenge for driver and team to manage the mechanical balance of the car over the bumps and kerbs. The ability of the driver to take entry speed without losing time on exit is critical here. The second and third sectors are a simple test of aerodynamic efficiency with a very long straight preceding one of the fastest final sectors on the calendar with the impressive Signes Corner always a challenge in qualifying trim.

We lead the championship by 33 points but still need a race winning focus to make sure the performance happens on-track and in the pits. On an off track note, I am also looking forward to ‘Braving the Shave’ for Macmillan Cancer support in the paddock during the weekend. I’m sure the team will have absolutely no comments about my ‘low drag’ hair style during the weekend. My only previous race at Paul Ricard was in the ELMS in 2012 finishing fourth in LMP2.”

Christian England (GB): “Super excited for the next race at Paul Ricard. We head into the second half of the championship having scored maximum points in the first three races which gives us a healthy lead. That said, now is not the time for complacency and we will remain focused for the coming races. So far we have executed the race weekends better than the rest and we hope to continue that way.

We did the prologue test at Ricard and I personally will be looking for a smoother run through the free practice sessions to be prepared for the race. The track has some very difficult corners especially turns 9 and 10 where time can be won or lost. We expect the weather to be hot and sunny which will mean it’s the toughest race of the season so far physically but overtaking should be a little easier than the last race at Red Bull Ring. The key will be traffic management as always.”

Mike Guasch (USA): “The first half of the season has been fantastic for the #2 Ligier while our sister car has been very unlucky. Going into the second half, we need to keep focused and keep pushing ourselves. The entire team has been brilliant – co-drivers, team-mates, team managers, engineers, mechanics, everyone! It has been a pleasure being back with United Autosports. My one and only race at Ricard was with United back in 2010 in GT3. However, we completed some pre-season testing there this year and then the prologue. We will be ready and prepared to continue to compete for the Championship title.”

Matt Bell (GB): “I like Paul Ricard because of the challenge it presents. Out of all the circuits on the ELMS calendar, this one is the most technical, especially the final sector of the lap. You really need to nail car set-up and be on point with your driving to be quick. We’ve prepared well with the testing we've done there, and hopefully that will pay off for us in the race. However, it was clear at the Red Bull Ring how much other teams have significantly upped their game.

I think we stole a march on everyone else as a team in the opening two rounds as we clearly were the quickest cars but it was much more of a fight in Austria. I'm expecting it to be like that for the rest of the year. Once again luck deserted our car at the last round but our pace was encouraging once we got back out on track. It looks like we had the speed to have won based on the fact we unlapped ourselves in a race without safety cars. Assuming that we can finally get a trouble free weekend, I’m sure we’ll be in the mix. The #3 car wants to add to United’s winning streak.”

Wayne Boyd (GB): “I’m really looking forward to Paul Ricard where hopefully we can put our run of bad luck for the #3 car behind us. I've never raced there before but the official ELMS test earlier in the year gave me a good insight with all the cars on track pretty much at the same time. It's quite a different track to what I've raced on before, some of the corners feel like they go on forever but I really enjoyed driving it. Again like Red Bull Ring, I think traffic will be difficult especially with the long back straight trying to deal with the GT cars. We've shown very good pace this year and I've had the privilege of qualifying our car on the front row for the last two races so we will be pushing for another pole and definitely our first win.”

Mark Patterson (USA): “I’m looking forward to a race with no bad luck! As one of the fastest driver combinations in LMP3, no one would know it by looking at the race results. In contrast, our strong sister car who is currently miles ahead of the entire field in the championship, has enjoyed flawless racing luck. This time around at Paul Ricard I’m really hopeful both driver squads can stand together again on the podium like we did at Silverstone’s opening race. I've been lucky enough to race at Ricard in various championships and enjoy its technical demands, which stretch Am drivers more than most tracks. Above all, finding Pro pace through the gutsy 90-degree corner at the end of a one mile straight remains elusive. I can't wait to get back in among the leading LMP3 cars. Like Mike and Matt, my first ever race at Ricard was in a FIA GT3 European Championship race for United in 2010.”

“I’m looking forward to seeing how we get on at Paul Ricard. The team have done really well so far this year and I’m thrilled we are leading the championship by such a margin. Bad luck for the number 3 car must surely turn around soon and fingers crossed they will end the year on a high too.”

“Coming to Paul Ricard with a healthy championship lead is not something we are complacent about. The rest of the field has caught us up and are biting at our heels so we still need the focus and commitment we have shown in the first half of the year. Having said that, it’s still a nice position to be in, we just want to get some good results for both cars now and hopefully finish the last three races how we began the first three.”