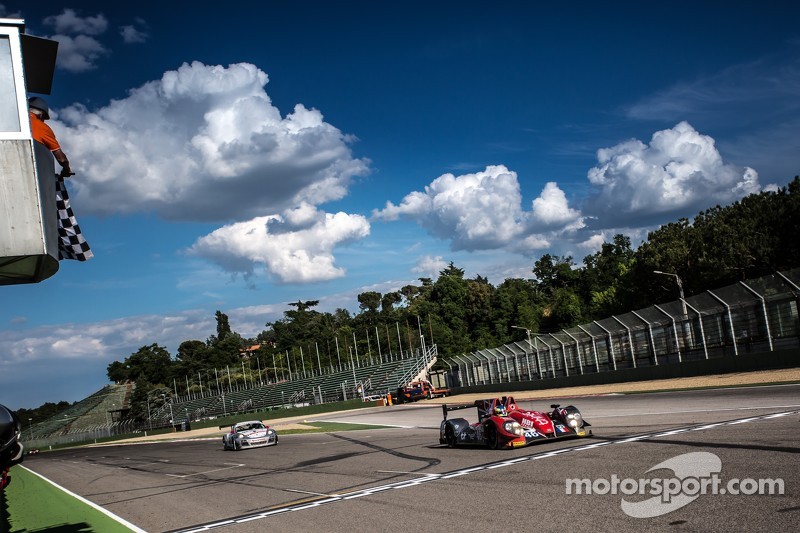 Once again the European Le Mans Series provided another thrilling race till the final whistle.

Two of the three Morgan LM P2s entered for the second round of the European Le Mans Series on the Imola circuit looked on course to win the race in the final hour. No. 46 run by Thiriet by TDS Racing took the lead 45 minutes from the end but stopped five minutes later with a broken brake disc. No. 43, the Newblood by Morand Racing Morgan, then went into first place 22 minutes from the flag until slowed by an engine problem with under three laps to go. Finally, the French constructor victorious at Silverstone had to make do with Thiriet by TDS's fifth and Pegasus Racing's sixth places.

Once again the European Le Mans Series provided another thrilling race till the final whistle. The battle between the constructors entered in LM P2, the blue riband category, raged from start to finish. The level playing field was obvious in qualifying with the Thiriet by TDS Racing and Newblood by Morand Racing and Pegasus Racing Morgan LM P2s setting the second, fifth and eighth-quickest times. The first-named driven by Ludovic Badey, Tristan Gommendy and Pierre Thiriet fought its way to the front during the race and looked on course to clinch victory.

Just when it had got past the Jota Sport Zytek, no. 46 had to pit for repairs to the left-hand front brake disc, which cost it three laps.

This incident relaunched the victory hopes of another Morgan LM P2, the blue and black car entered by Newblood by Morand Racing driven by Romain Brandela, Gary Hirsch and ex-FI ace Christian Klien. The Austrian overtook the Jota Sport Zytek in the final 30 minutes and he pulled out a lead of two seconds, which should have been enough to ensure victory if the engine of no. 43 hadn’t suddenly given up the ghost in sight of the finish.

At Imola the third car from the Onroak Automotive workshops had a fault-free race and saw the flag in sixth spot. Julien Schell, Niki Leutwiler and Jonathan Coleman scored their first points in the championship.

Now it’s time for the teams to focus on the Le Mans 24-Hours fortnight starting with the test day on 1st June and the finish of the greatest endurance race in the world two weeks later. Then comes the third round of the European Le Mans Series on 19-20 July on the Red Bull Ring in Austria.

Julien Schell, #29 – Pegasus Racing Team Manager and driver: “It was a good weekend for the team, which finished in sixth place. It’s great for us as we’re making our debut in the category. We’ve made a lot of progress and we weren’t far off the quickest times in the race. It’s very encouraging before we tackle the Le Mans 24 Hours. We’ve done a lot of work on the setup and the car handles really well and it’s easy to drive. We’re very happy with our weekend on the lovely Imola circuit.”

Benoît Morand, #43 - Newblood by Morand Racing Team manager and joint owner: “The engine stopped and for the moment we don’t understand the reason why. The drivers did a great job; our strategy was perfect and we had enough fuel. It’s very hard to accept as we had victory in the bag, but that’s part of our work.”

Xavier Combet, #46 - Team Manager Thiriet by TDS Racing: “The car was very well set up in terms of handling and tyre wear. But a puncture when we had a 30-second lead during Pierre Thiriet’s second stint cost us a minute. At the end of the third hour Tristan Gommendy was in a position to fight for victory with Jota Sport. He took the lead and we had no worries for the end of the race. Unfortunately, the left-hand front brake disc broke. Tristan managed to avoid going off and the team changed the disc and the pads in just over four minutes. Our fifth place means that we still have an eight-point lead in the championship, but we could have made the break this evening. Lady Luck wasn’t on our side and the result doesn’t reflect our performance. We decided to run this Morgan for a brief period and we gave it victory at Silverstone. Now we’ll be taking delivery of the new Ligier JS P2 on Tuesday and we’ll test it the following day at Magny-Cours.”