The event was a fiercely contested competition, with up to seven cars in contention for the overall win.

Greaves Motorsport achieved a points scoring finish in the 6 Hours of Donington, the second round of the 2012 European Le Mans Series. Alex Brundle, Lucas Ordonez and Tom Kimber-Smith drove the team’s Nissan-powered Zytek Z11SN prototype to seventh place overall but the team left the friendly Midlands circuit with a sense of disappointment, having led the race and seen a chance of victory slip through their fingers, despite being on the pace all weekend. 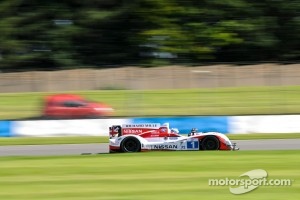 The event was a fiercely contested competition, with up to seven cars in contention for the overall win. Alex Brundle drove a strong opening stint, recovering well after being pushed wide in a typical opening lap incident with another car. Lucas Ordonez took over for the second spell and maintained the progress up the leader board, till just after the halfway point he found himself at the head of the field. At this point problems with the car started to affect performance and Lucas had a moment on the final corner, Such is the level of competition in the race this incident dropped him down to fourth place. Tom Kimber-Smith drove the final stint and was in contention till the problem with the front brakes meant that he had to pit for attention. The team did a fantastic job to change the disks and pads in a such a short period but the damage was done and the race was lost.

Alex Brundle: “Alexander Sims in the Status GP car went for the inside pretty aggressively at the Old Hairpin, two into one won’t go there so I went wide to let him go, especially as it was the first lap of a six hour race. This dropped me to seventh but I managed to take back the two places lost and finished my run in fifth. A seventh place finish is not what we came here for and I think we all deserved better than that today. As always it was a great effort from the team and I hope our time will come soon.”

Lucas Ordonez: “I struggled to get my tyres up to temperature during the safety car period, I got away okay but when I braked for the last turn I locked the front wheels and went onto the grass, dropping down to fourth place. It’s clear that the way to win these races is by not making a single mistake! I can take a lot of positives from today though as I think I have more pace now and I have much more confidence too.”

Tom Kimber-Smith: “We had a shot at the podium but we didn’t have any luck today, I could feel that the brakes were a bit soft but when I went into the hairpin the pedal went straight to the floor. The effect of this is that all the brake pressure goes to the rear so it’s like doing a handbrake turn into the hairpin! It’s such a shame as Alex and Lucas drove really well and we couldn’t have asked more of the team.”

Greaves Motorsport’s Team Manager, Jacob Greaves, reflected after the race: “With the competition as close as it is this season, the only way to win is to drive flat out for the whole six hours, there is no room for any error. We had a minor incident on the opening lap, which at the time seemed innocuous, losing only a few seconds, but to make up that time with such a strong field was always going to be tough. The team was aware of an issue with the brakes right from the start of the race so although Alex and Lucas made their way through the field to the lead we knew that the brakes could get worse at any time. During Tom’s spell at the wheel the lack of brakes made the car undrivable and he was forced to pit to make repairs. We still are not sure of the cause of the problem but we will be investigating the matter during this week. It only goes to prove that the level of the competition is so high that victory can only be achieved with perfect races. We had all the ingredients on hand with a Nissan engine, Dunlop tyres and a Zytek chassis but the final result was not a true reflection of this. We will regroup and come back stronger for our next event.”

Combined final for the ELMS and the ALMS