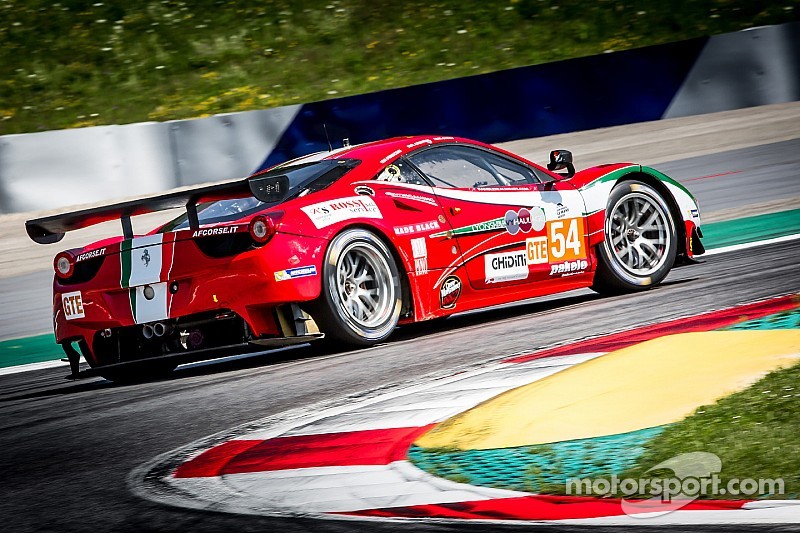 Delivering superb pace during his two stints in the challenging four hour contest, the Bishop’s Stortford-based driver eyed a realistic bid for his first silverware of 2014.

British sportscar racer Michael Lyons made a welcome return to the LMGTE points at the Red Bull Ring in Austria on Sunday, 20th July, with a top five finish in round three of the European Le Mans Series, partnering AF Corse team-mates Marco Cioci and Piergiuseppe Perazzini.

Delivering superb pace during his two stints in the challenging four hour contest, the Bishop’s Stortford-based driver eyed a realistic bid for his first silverware of 2014. Although ultimately missing out on a first ever ELMS podium, the No.54 Ferrari 458 Italia trio climbed into ninth place in the LMGTE championship.

“We were fighting for the podium this weekend, we definitely had the pace”, said Michael, “The whole team did a fantastic job, although we didn’t quite get the result we wanted everyone was happy – the engineers and mechanics were really pleased with such a competitive showing.”

Aiming for a return to the points, after a highly unfortunate non-finish last time out at Imola in Italy, 23-year-old Michael took the first stint of the Austrian encounter and scythed his way through the order during the opening 60 minutes.

From ninth in LMGTE, 17th overall, at the start, the Essex driver produced a sensational opening to the race and – as the fastest Ferrari driver on track – he climbed into second in class and the outright top eight prior to the first driver change pit-stop.

Perazzini piloted the car during the second hour of competition and after handing the AF Corse machine back over to Michael following a highly consistent performance, the Briton held ninth in class and 15th position overall.

Once again serving up an excellent drive during his second stint at the wheel, the British Racing Drivers’ Club (BRDC) member repeated his earlier heroics to slice his way through the order into the class top three before Cioci capped off the race with a strong final hour – finishing fifth in LMGTE, 11th overall.

“We missed out in qualifying, we didn’t have the pace for pole but we did have the performance to be P3 – it just didn’t come together for us unfortunately”, reflected Michael, “My first stint was mega, we had really good speed and I was into P2 in GTE at the end of the first hour. Piergiuseppe was up there with some of the best of the amateur drivers, he was consistent and did a good job.

“In my second stint I found about half a second extra in pace over what I was doing earlier on, a lot of the time we were the quickest Ferrari out there. We were definitely in contention for the podium but the cards didn’t fall our way and we didn’t get the result we felt we should have. If it was a couple of hours longer, maybe the result would have come to us.”

There is now a break of roughly two months until round four of the European Le Mans Series, which will take place on Sunday, 14th September, at Paul Ricard in the south of France. In the meantime, Michael will be in action this coming weekend, 25th/26th/27th July, as part of the Silverstone Classic where he will contest races in FIA Masters Historic Formula One and Group C Sportscars.