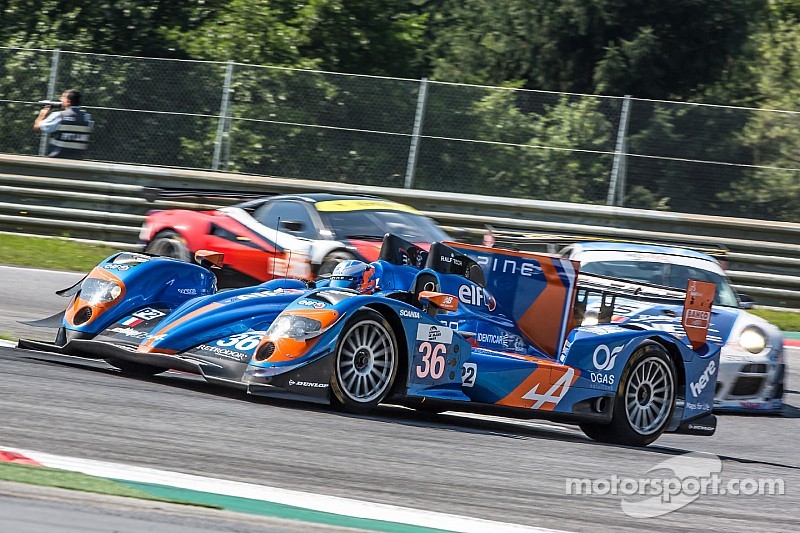 Following great qualifying sessions this morning, the European Le Mans Series this afternoon put on an exciting and powerful display of racing for spectators either in situ in Austria or in front of their TV or computer screens.

Thirty one of the 33 competitors entered in the 4 Hours of Red Bull Ring finished after four hours of relentless battling, and it was Signatech Alpine (No. 36 of Paul-Loup Chatin, Nelson Panciatici, Oliver Webb), which claimed its first victory of the 2014 season and the lead of the LMP2 category.  Following some really great battles throughout the race, Imola winners JOTA Sport (No. 38 of Filipe Albuquerque, Simon Dolan, Harry Tincknell), finished in second place, a scant 15 seconds behind the winners.  In third was the No. 34 Race Performance ORECA 03 (Franck Mailleux, Michel Frey), less than 20 seconds from the leaders.

Greaves Motorsport can be happy to have got both its cars through to the end of the race, the No. 28 of Luciano Bacheta and Mark Shulzhitskiy in fourth, 1m10 behind, while the No. 41 of Matt McMurry, Tom Kimber-Smith and Mark Patterson was sixth. Despite very good performances, but due to being given several penalties, the No. 43 Morgan Judd of NewBlood by Morand Racing (Gary Hirsch, Christian Klien, Pierre Ragues) was fifth.  The No. 29 Pegasus Racing Morgan Nissan finished in seventh place in LMP2.

Unlucky, after falling victim to first a brake problem as had been the case in Imola, followed by a broken rear axle, was Thiriet by TDS Racing which had to retire during the second hour of the race.

The No.55 AF Corse Ferrari 458 Italia of Duncan Cameron, Matt Griffin and Michele Rugolo claimed its second victory of the 2014 season at the Red Bull Ring and thus takes the lead of the LMGTE Championship standings.  It finished ahead of the No.81 Kessel Racing and No.66 JMW Motorsport Ferraris.

In GTC, SMP Racing stamped its authority on the first two steps of the class podium – the No.71 of Kirill Ladygin and Aleksey Basov ahead of the No.73 of Olivier Beretta, David Markosov and Anton Ladygin which took its third second place of the year.  The No.95 AF Corse Ferrari of Cedric Sbirrazzuoli and Adrien Leener was third.