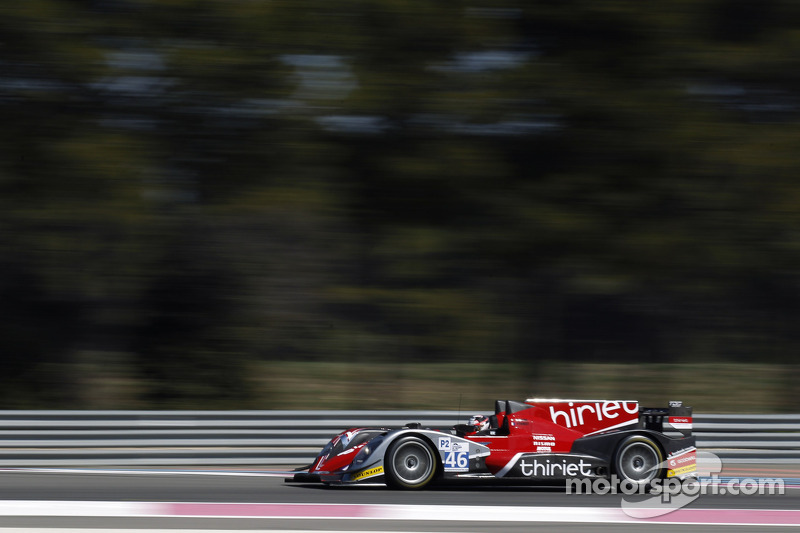 After taking the pole position yesterday for the European Le Mans Series season opener, 6 Hours of Le Castellet, Thiriet by TDS Racing and drivers Mathias Beche and Pierre Thiriet set their goals to win the opening race. After six hours of an action packed race, which saw some of the early favourites struggled with the pace, the LM P2 team remained supreme to take the first win of the 2012 season.

An emotional Beche said, “I’d like to first dedicate this win to my mother, who passed away recently. As for the race, I was a little surprised by the lights at the start. I lost first place, but was able to get it back during the second stint. We showed experience was key by being quick and consistent, while being efficient in the pits. We avoided contact with other competitors and that was one of the keys to the race. It’s a well-deserved victory against some of the biggest names in endurance racing.”

For a first time, we couldn’t hope for better.

On the famous French Paul Ricard circuit, Beche and Thiriet were a complete lap clear of the second placed team, Sebastien Loeb Racing. TDS Racing may not have been the early favourites to win the title in the early season predictions; but they took the lead after few hours of racing and never looked back mainly thanks to their pure pace of their Oreca 03-Nissan package but also thanks to their awesome pit strategy as the team spent two minutes less in the pits than anyone of their rivals.

”With the competition level so high, you had to be perfect to win,” said Thiriet. “The ORECA 03, the team, the drivers: it’s the whole package that got this result. The team was excellent, and quick to react when we were forced to change the cover. I’ve very happy to start the season like this.”

Eight-time World Rally champion Sebastien Loeb became a team owner with team manager Dominique Heintz for the 2012 season, and in unexpected turn of events this past Thursday, Loeb ended up at the circuit. Thus he became the team manager for their first ELMS race, and they took their first podium finish. The team’s drivers Stephane Sarrazin, Nicolas Minassian and Nicolas Marroc finished second in the top class of LM P2.

“For a first time, we couldn’t hope for better. The drivers were really good. Stephane and Nicolas confirmed that they are references in the discipline. Nicolas had a superb race and certainly surprised a lot of people. As for the team, while they are discovering a discipline that isn’t easily mastered, they didn’t commit the slightest error. Bravo! Of course, there are a few things to fine tune, but the team has already shown that they are up to the challenge,” said Loeb.

Heintz admitted he was surprised at the team taking second in their debut race, and he commented: “I’m simply speechless! I think it will take some time before it sinks in. My first thought goes to the engineers and mechanics, who worked enormously these last weeks. The drivers were amazing. We gathered momentum during the weekend and to get a podium finish, for such a young team, is extraordinary.” Third in the race was the Status Grand Prix squad and its Lola B12/80 Coupe-Judd HK package driven by Alexander Sims, Yelmer Boorman and Dean Stirling. They finished the race just half a minute ahead of the current champions, Greaves Motorsport with drivers Lucas Ordonez, Alex Brundle and Tom Kimber-Smith. 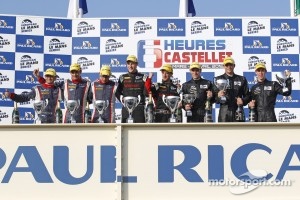 The result of the Greaves Motorsport could been much better through as when the team was fighting for the lead with TDS Racing, and with 1 hour and 40 minutes remaining, the team lost the front left side pod on their Zytek Z11SN – Nissan. The rules state that both headlights have to be functional and due to the missing part affecting the aerodynamics, the team was forced to come in and put a new one on. They dropped to third before getting a two minute penalty which dropped them into fourth where the team stayed to the end of the race.

LM PC class was won by Curtis Racing Technologies driven by Phil Keen, Alex Kapadia and John Hartshorne while the second entry of the LM PC class, Boutsen Ginion Racing and its drivers Jean-Marc Merlin, Massimo Vignali and Thomas Dagoneua had a lot of problems and finished the race some 40 laps behind the class winner. The winning LM PC team finished the race in eight position overall, twelve laps down the race winning LM P2 entry of Thiriet by TDS Racing.

JMW Motorsport wins the battle between the Ferraris in the LM GTE-Pro category.

LM GTE-PRO category saw three teams battle it out for the win, all using Ferrari 458 Italias. In the end it was the JMW Motorsport team with drivers Jonathan Cocker and James Walker to take the top prize with the opening of the season. JMB Racing drivers, Jaime Melo and Marco Frezza took the second place after a hard fought battle for the win. Cocker kept trying to catch the JMB Racing car in front, and got his opportunity just nine minutes before the end of the race when Melo was forced to come into the pits to refuel their Ferrari. 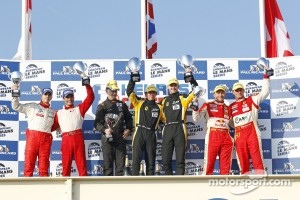 Despite a fast pit stop, Melo rejoined the track side by side with Cocker going into turn one. Cocker had the inside line and therefore came out on top. During the last few laps, Melo was trying furiously to get past the yellow Ferrari even by taking risks; which caused him to receive a warning by having all four wheels on the curbs. Melo had to settle for second place. Third in LM GTE-PRO category was Kessel Racing driven by Philipp Peter and Michal Broniszevski.

In the LM GTE AM category it was a Porsche from the Prospeed Competion team with drivers Maxime Soulet and Marc Goossens which celebrated the victory despite a late attack from another Porsche squad, IMSA Performance Matmut team driven by Raymond Narac, Nicolas Armindo and Antony Pons. The win by the Prospeed team was their first one in the LM GTE-AM class.

Third in the race was JMB Racing Ferrari squad driven by Alain Ferte and Philippe Illiano. One of the main favourites for the title, AF Corse Ferrari was forced to retire from the race after 144 laps while in third place.

The next race of the European Le Mans Series will take place in Donington on 13th-15th of July as the event in at Zolder was cancelled. The decision was made by the FIA, the series, the ACO and the teams due to the number of entrants (19) for the Belgian round. The number of entries was judged to be insufficient for a six hour event. The various partners involved in the European Le Mans Series have given themselves the time to assemble a field of 25 cars minimum for the Donington round.