Starting from fourth on the grid the Morgan-Nissan driven by Baguette-Enjalbert-Pla had a perfect race and emerged victorious in the Donington 6 Hours. This car was entered by Jacques Nicolet’s team only a few days before the event, and although it was the spearhead of the French squad’s attack it had been hit with problems in the days prior to the race. On Friday it had an engine problem and water in the fuel on Saturday. All these glitches reduced the track time of no.35’s drivers, in particular Olivier Pla whose first time out on the circuit was in qualifying when he set the fourth-fastest time. 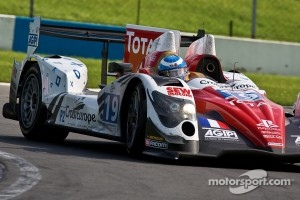 OAK Racing ran different strategies for its two cars, and decided to send out no. 35 on its qualifying rubber and bring it in on lap 30 to shod new tyres. Thus, while the other Morgan-Judd driven by Matthieu Lahaye (pole setter) was pulling away at the front of the field, Bertrand Baguette snatched second place from Sam Hancock’s Zytek-Nissan in lap 60. From then on the two Morgans monopolised the first two places in the overall classification. The Belgian driver took the lead when no. 24 stopped. The battle for victory went on till the last hour as the pit stops and strategies decided by the different teams played out.

With 1h 10m to go to the chequered flag Warren Hughes (Murphy Prototypes Oreca-Nissan) snatched the lead from Pierre Thiriet (Thiriet by TDS Racing Oreca-Nissan) who pitted and handed over to his team-mate, Mathias Beche. But only two laps afterwards, the Brit spun when overtaking a GT and went off. Hughes managed to rejoin still in front. But his spin did not go unpunished. On lap 200, the Murphy Prototypes car stopped at its pit and lost additional time as the front bonnet had to be readjusted.

Olivier Pla in the no. 35 Morgan-Judd took over the lead after the sixth round of refuelling stops and stayed there till the flag. Mathias Beche was delayed after being hit by a 30-second stop & go penalty for speeding in the pit lane, and this dropped him back to third behind the Murphy Oreca-Nissan

But the battle for second continued and Beche and Brendon Hartley had a ding dong scrap with forty minutes to go to the flag. Finally, the bonnet change on the Irish-entered prototype during its final pit stop cost the New Zealander second place on the podium.

The Morgan-Nissan driven by Baguette-Enjalbert-Pla scored its first win of the season from the Beche-Thiriet Oreca Nissan, which is still in the lead in the European Le Mans Series. The Loeb Racing squad finished fourth after the collision on the first lap between Nicolas Marroc and Soheil Ayari.

The Greaves Motorsport Ordonez-Kimber-Smith-Brundle Zytek-Nissan, the reigning champion in LM P2, saw the flag 17 laps behind the leaders after a brake problem delayed the car in the second half of the race.

Among the retirements was that of the Status Grand Prix Lola-Judd (alternator), which meant that neither of the Jousse brothers did a lap in the race, and the Jota Zytek-Nissan (accident with Simon Dolan at the wheel).

Bertrand Baguette (no. 35 OAK Racing Morgan-Nissan)
“We’ve been expecting this victory for some time now. My team-mates and I did a good job. After the problems we had before the race I reckon we fully deserved this win. I think that our strategy of starting on used tyres and then doing a couple of stints on new rubber played a major part in our success.”

Olivier Pla (no. 35 OAK Racing Morgan-Nissan)
“Since the start of the year we’ve shown the car’s potential without turning it into results. We’ve done so at Donington despite a difficult start to the weekend. This victory is also down to the whole team which has done a great job to enable us to be so quick and reliable throughout the race. I’m very happy with my first outing at Donington. We’re dedicating this victory to Guillaume Moreau who’s contributed so much to the team.”

Dimitri Enjalbert (no. 35 OAK Racing Mogran-Nissan)
“It’s my first race in LM P2 and I did only ten laps before the event to get to grips with the car. I’m over the moon that it’s ended in victory!”

Mathias Beche (no. 3 Thiriet by TDS Racing Oreca-Nissan)
“We could probably have won today had it not been for that penalty for speeding in the pit lane. Our limiter didn’t work properly. But that’s the rule. Finally we finished second and we’re still in the lead in the championship; and that what really counts.”

Jonathan Cocker: 1st LM GTE Pro (JMW Motorsport Ferrari F458 Italia)
“It’s a pity there weren’t more cars in our category but that didn’t stop us from having a good race. Allan Simonson was the perfect last-minute replacement for James Walker.”

Nicolas Armindo: 1st GTE Am (Imsa Performance Matmut Porsche 911 RSR)
“We were not happy with our qualifying performance. Finally, we found the right setup at the last moment and it worked well in the race. It was important for us to finish in front of the Ferrari, which had better fuel and tyre consumption, which meant that we had to be very quick on the track.”

Thomas Dagoneau: 1st LMPC (Boutsen Ginion Racing Formula Le Mans)
“We’re happy to have bagged the maximum number of points after our lack of success at Paul Ricard. This category deserves to have more runners as it’s a crucial step to move up to LM P2.”