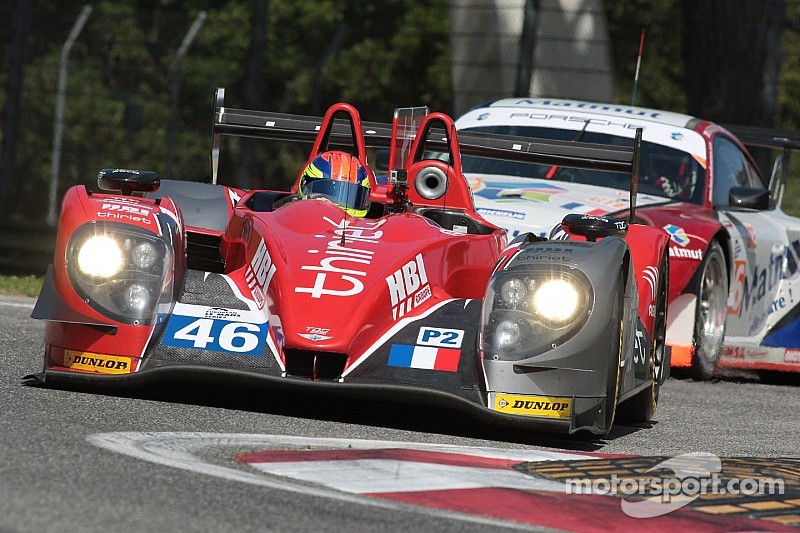 In LMP2 the battle is on between Thiriet by TDS Racing, which currently leads, ahead of JOTA Sport and Signatech Alpine.

As teams, drivers, media and fans are all ready to tackle the third round of the 2014 European Le Mans Series this weekend at the Red Bull Ring circuit in Austria, it's a good opportunity to look at the championship standings in each category at the mid-season point.

In LMP2, the top class of the series, the battle is on between Thiriet by TDS Racing, which currently leads, ahead of JOTA Sport and Signatech Alpine, the three LMP2 podium finishers at the 24 Hours of Le Mans. Twelve points separate the Montpellier-based team and its drivers Ludovic Badey, Pierre Thiriet and Tristan Gommendy (35pts) from the Britons from Kent, JOTA Sport (Simon Dolan, Harry Tincknell and Filipe Albuquerque - 27 pts), while Paul-Loup Chatin, Oliver Webb and Nelson Panciatici's 25 points place the Signatech Alpine drivers and their car in third place overall. All tied on 24 points behind the top three are the Swiss team, Race Performance, and its drivers Franck Mailleux and Michel Frey, together with Sébastien Loeb Racing (Jan Charouz/Vincent Capillaire) and Greaves Motorsport (Matt McMurry/Tom Kimber-Smith).

The No.43 Morgan Judd of Swiss team NewBlood by Morand Racing is in 7th place with 15 points for the car and its drivers Gary Hirsch (CH), Romain Brandela (FR) and Christian Klien (AUT), but with a home race ahead for the Austrian, the team is hoping to move up the order.

The second Greaves Motorsport entry, the No.28 Zytek Z11SN, and Pegasus Racing's Morgan Nissan have eight points each (8th and 9th), and are ahead of the Murphy Prototypes ORECA 03 Nissan (10th) and the No.50 Larbre Compétition Morgan Judd (11th).

In LMGTE, the Russian SMP Racing team has the lead thanks to second place at Silverstone and victory in Italy. Together with its drivers Andrea Bertolini, Sergey Zlobin and Viktor Shaitar, it has 44 points on the board, 13 more than the No.55 AF Corse Ferrari F458 Italia of Duncan Cameron and Matt Griffin (31 pts each) and Michele Rugolo (25 pts). Third in LMGTE is JMW Motorsport and drivers Daniel Zampieri, George Richardson and Daniel McKenzie who all have 25 points. Austrian entry AT Racing (No.56 F458 Italia - 4th) will be racing in front of a home crowd at the end of this week, and Alexander Talkanitsa Sr and Jr and Pierre Kaffer are currently 5th in the driver standings with 24 points.

At IMSA Performance Matmut, its two Porsche 911 GT3 RSRs (Nos.76 and 67) are respectively placed 5th and 13th in the standings, while Frenchmen Raymond Narac, Nicolas Armindo and David Hallyday have amassed 23 points (6th).  Erik Maris, Jean-Marc Merlin and Eric Hélary are in 15th place in the LMGTE drivers table with one point each.  The No.81 Ferrari 458 of Kessel Racing is 6th with 19.5 points - as are its drivers Matteo Cressoni and Thomas Kemenater (7th) - while the No.80 sister car is 12th.

Team Sofrev ASP holds 7th in the tables (Fabien Barthez/Anthony Pons/Soheil Ayari - 8th in the driver standings) with 16 points and the two AF Corse Ferraris, Nos.54 and 65 are 8th and 14th, while the No.86 Porsche of Gulf Racing UK is holding 9th place with six points. The British team's Aston Martin Vantage is 11th with 2.5 points, and the No.82 Porsche of Crubilé Sport is 10th.

Of the 16 cars entered in the GTC class of the 2014 ELMS, it is the No.60 Formula Racing Ferrari 458 Italia GT3 and its drivers Johnny Laursen and Mikkel Mac which lead the class with 41 points. Jan Magnussen, the third Dane in the line-up, didn't take part in the Italian round and therefore is in 7th place with 15 points but he will be back in Austria.  Anton Ladygin, Olivier Beretta and David Markozov have 36 points after two appearances with the No.73 SMP Racing F458 GT3. The other two SMP Ferrari Racing entries, Nos.71 and 57 are 5th and 14th. Team Ukraine (Alessandro Pier Guidi/Andriy Kruglyk/Sergii Chukanov) is 3rd in the class with 25 points.

The 4 Hours of Red Bull Ring is this weekend on the Austrian circuit in the Styrian mountains.  The first ELMS free practice session will take place at 10h30 on Saturday, 19th July followed by qualifying for the Auto GP Championship. The second free practice session will begin at 15h00 while, on Sunday, ELMS competitors will be qualifying at 9h30 (LMGTE and GTC) and 10h00 for LMP2. The start of the 4 Hours of Red Bull Ring will be given at 14h00.