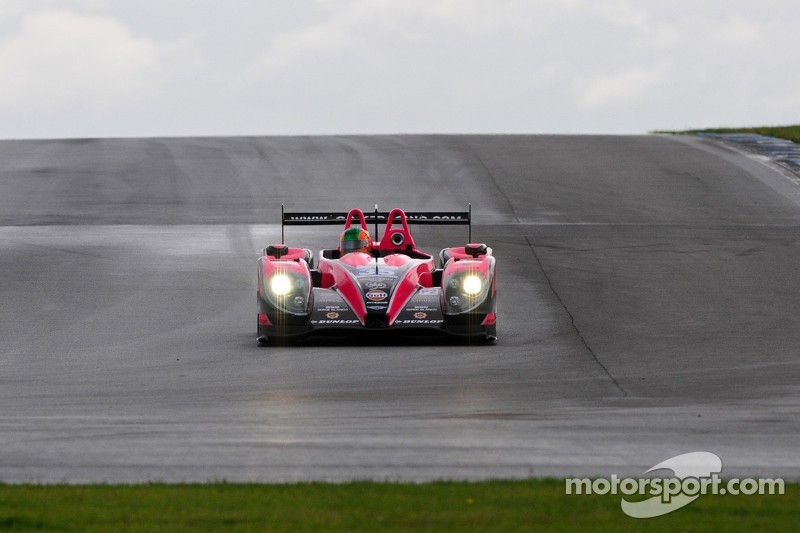 Belgian Bertand Baguette and Frenchmen Dimitri Enjalbert, and Olivier Pla took victory for OAK Racing at today's 6 Hours of Donington European Le Mans Series race. The trio emerged triumphant after a very closely fought event that saw pace, strategy and some luck all play a part in the final result. As expected, the nine-car LMP2 field produced close and exciting racing throughout, with most of the entered cars in contention for a podium position before a series of misfortunes put paid to some of their chances. The three-car GT field was less compelling after the first two hours or so, and saw the pro-class JMW Motorsport Ferrari 458 roundly beating the two Am-class cars of IMSA Performance (Porsche 997) and AF Corse (Ferrari).

A close but clean run through the first corner was not maintained during the field's first trip through the Craner Curves. As Alex Brundle in the #1 Greaves Motorsport Zytek went off line, Soheil Ayari and Nicolas Marroc spun their Pecom Racing and Loeb Racing Orecas almost in concert trying to avoid him. Ayari came off worse, as the rear of his car made contact with the barrier, forcing an early unscheduled stop that effectively ended the team's chance of making a serious impression on the race. Up front, Mathieu Lahaye had remained safely in the lead from pole position in the #24 OAK Racing Morgan-Judd, ahead of the #38 Jota Sport Zytek with Sam Hancock at the wheel, and the #35 Nissan-engine OAK car, which was started by Baguette.

Brundle's difficulties temporarily demoted him to seventh place, but he soon set about a recovery drive, first passing sixth-place runner Jody Firth in the #18 Murphy Prototypes Oreca, then squeezing past fifth-place Pierre Thiriet in the #46 TDS by Thiriet Oreca through the Melbourne hairpin on lap eight. The young French gentleman driver was struggling to get up to pace, as Firth also found a way past before long. By lap 24, Brundle was within five seconds of fourth-place Alexander Sims in the Status GP Lola coupé. At the front of the field, third-place Baguette rapidly gained ground on Hancock, meaning the top three were covered by only three seconds after 30 minutes of racing.

Marroc had stopped the Loeb Racing Oreca earlier than any of the other LMP2 runners following the first-lap incident, meaning that car would be out of sequence with the rest of the field for the remainder of the race. Baguette pitted from third and, unlike the other cars in the class, took on fuel and changed tyres during his first stop. “We had done a lot of laps on those tyres in qualifying, so we decided to do a different strategy and single-stint them,” he explained afterwards. Sims pitted from fourth and took on fuel only on lap 30, while the Greaves, Murphy and Thiriet cars did the same over the next few laps. Leader Lahaye was one of the last to stop, but there was no order change at the front of the field after the first round of pit visits, despite Hancock continuing to run the #24 OAK close for the lead.

The beginning of the second hour coincided with the race's first retirement, as the Status Lola was wheeled into the garage suffering from a failed alternator and other electrical problems. “It was fun when I was in the car. Everything was feeling really good. We were just a couple of tenths off the leaders' pace, and our car was very good on its tyres and able to maintain a strong speed,” said a disappointed Sims.

Baguette moved the #35 into second place before the second round of pitstops, which saw him remain in the car, but Lucas Ordonez take over from Brundle, Brendon Hartley take over from Firth, Mathias Beche take over from Thiriet, Simon Dolan take over from Hancock, Nicolas Minassian get in for Marroc and Jacques Nicolet take over from Lahaye. As the #35 only took on fuel, Baguette snatched lead of the race from the sister OAK racing machine. Team boss Nicolet then ceded second to Dolan, before receiving the bad news that he would have to take a 30-second stop-go penalty for speeding in the pitlane. Ordonez moved into third ahead of Beche during the second round of stops, and these positions would be maintained as the leaders cycled through the third stint, which left Hartley versus a very quick Minassian for fifth as the main battle out on track.

As the race approached half-distance, the leading #35 car's gentleman driver Dimitri Enjalbert was at the wheel, while Dolan continued to run at a solid, fast pace in second and Ordonez consolidated Greaves' recovery from their early-race troubles. Beche was having a quiet race in fourth, while Hartley was struggling to stay ahead of Minassian due to an ill-handling car. A spin for Nicolet meant the polesitting #24 OAK was now languishing in seventh, and gearbox problems in the latter stages of the race meant they would rise no higher than sixth by the chequered flag, despite some other retirements.

The fourth hour opened with Simon Dolan's dramatic crash out of second place at the old hairpin, which brought out the safety car. The Jota Sport team owner was unhurt, but the #38 Zytek was too heavily damaged to continue. As soon as the race was neutralised, leader Enjalbert pitted, along with second-place Ordonez, third-place Thiriet, fourth-place Hartley and fifth-place Minassian. The leader took on fuel and new tyres, as did #18 Murphy car (now with Warren Hughes at the wheel) – leaving both of them in better shape overall despite Ordonez and Thiriet moving up to first and second.

But the Greaves car was showing the first symptoms of what would become a serious brake problem: Ordonez ran wide into the grass at Goddards corner, allowing Thiriet, Enjalbert and Hughes into first, second and third respectively. Towards the end of the fourth hour, Enjalbert pitted and the extremely quick Pla took over the #35 OAK, ensuring the car would be in contention right to the end. “I was very happy with the result, as this is my first race, both in the LMP2 class and in the ELMS, and I only had 10 laps to learn the car in free practice,” said Enjalbert. Le Mans LMP1 stars drivers Minassian and Sarrazin both put in very fast and aggressive stints to get the Loeb Racing car back on the lead lap (and into an eventual fourth place overall) in the second half of the race.

With an hour and a half to go, Hughes had closed to within seven-tenths of race leader Thiriet. Tom Kimber-Smith's efforts to salvage a podium for Greaves were brought to an end when the aforementioned brake problem became terminal, forcing the team to completely change the car's braking system on both sides. This meant a disappointing seventh-place finish at the end of the day. Murphy Prototypes were the next team to see their chances take a hit, as Hughes got too wide at the old hairpin and had a high-speed spin through the grass. The car survived undamaged, but time was lost as the team checked over the nose section while Hartley climbed aboard for his second stint of the race.

However, the race directors were concerned about damage to the Oreca's nose, and demanded the team pit again to replace it. “I felt it was a very harsh penalty, as there was only one small crack in one of the vanes,” said Hughes afterwards. “I think we had a real chance at second if that hadn't happened.” Third place was nonetheless a good result for the team, and they had the consolation of Hartley recording the race's fastest lap in the closing stages. The result was then effectively decided as the race entered its final hour: the #46 TDS by Thiriet being handed down a 30-second stop-go for pitlane speeding. Although the driver pairing of Beche and Thiriet admitted disappointment at missing out on the win, second-place is enough to keep them in the lead of championship thanks to their round-one victory at Paul Ricard back in April.

With 40 minutes to go, Pla made the #35 car's final stop, and the team made the unusual decision to change only the two left-hand tyres. After taking the chequered flag, he said: “We could have risked leaving the tyres on until the end if we were under pressure, but as we had a gap, the team decided to play it safe and change them. I'm very happy with the win, as it's my first time at Donington.” He finished by dedicating his win to OAK driver Guillaume Moreau, who continues to recover from his Le Mans test-day accident.

With only one GTE-Pro and two GTE-Am cars entered, fans, media and teams alike were treating this event as one combined GT class. Jonny Cocker had to start the #66 JMW Motorsport Ferrari 458 from the back of the grid due to the team's overnight driver change from James Walker to Alan Simonsen, but he had already passed the two GTE-Am machines by the end of the first lap. “I managed to get into the lead through the first corner, but once things settled down suffered some understeer due to a tyre-pressure problem,” said Cocker after the race. This allowed Nicolas Armindo in the IMSA Performance Porsche 997 a chance to take lead, and he pulled off a dramatic pass as the Status LMP2 car lapped the GTE runners. “It was good to have the fight at the start,” concluded Cocker. “We treated the race no different to any other and the car was quick and consistent at the end.”

Once the tyre-pressure problem was addressed during a pitstop, the combined pace of professionals Cocker and Alan Simonsen proved too much for the Pro-Am line-up in the Porsche, and the yellow Dunlop-sponsored Ferrari would finish two laps ahead of the French team after six hours. Armindo, Raymond Narac and Anthony Pons nonetheless took the GTE-Am-class win, a lap ahead of Marco Cioci, Piergiuseppe Perazzini and Matt Griffin in the AF Corse Ferrari 458. “We were a little disappointed after qualifying, but we tweaked the setup on the warm-up laps driving to the grid!” said Armindo afterwards. The AF Corse Ferrari was easier on fuel and tyres than us, so we had to push to win,” he added.

The ELMS' next scheduled round is in Brno, Czech Republic on September 8-9, and despite fears over the series' future due to the low car count at Doningoton, all indications from teams and the organisers at the event was that the championship's third round would go ahead as planned.