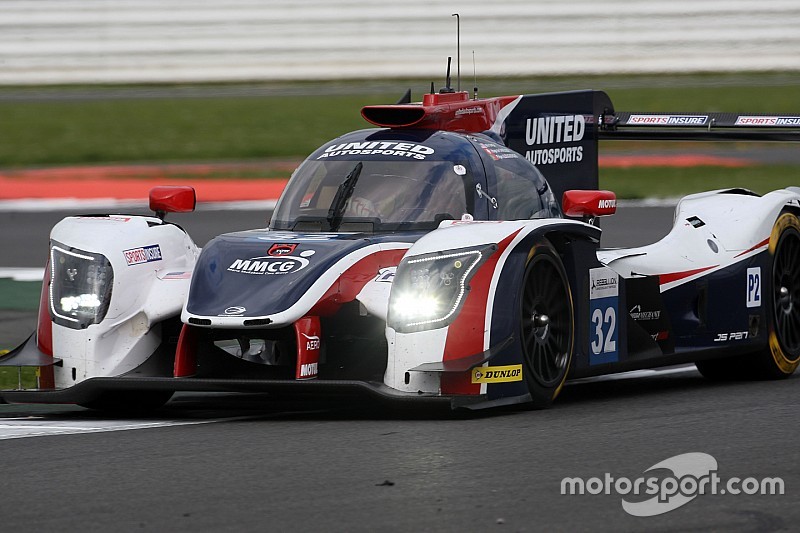 United Autosports began the 2017 European Le Mans season with a thrilling victory in the 4 Hours of Silverstone, with Filipe Albuquerque snatching the win on the penultimate lap.

The early pace was set by the polesitting #21 DragonSpeed car, which kept the lead in the opening stages thanks to Ben Hanley’s blistering pace on board the Oreca 07.

After making a driver swap for Henrik Hedman’s stint, the Swedish driver made a smattering of errors to fall down the LMP2 order.

Making up lost ground after Hanley returned to the car, the DragonSpeed team had to make a lengthy pitstop to repair damage, leaving Hedman behind the majority of the LMP3 field.

After losing ground in the early stages, the #22 G-Drive Oreca was thrust back into contention after Memo Rojas’ time in the car thanks to a strong second stint from Leo Roussel, who passed the #25 Algarve Pro Racing Ligier of Matt McMurry before its race came to a halt due to gearbox problems.

Ryo Hirakawa took the reins of the G-Drive Oreca for the last third of the race, and quickly began adding to the initial 25-second lead over Albuquerque, who was in for the #32 United Autosports Ligier’s final stint.

The #32 car had previously battled for the lead, but Will Owen’s stint was hamstrung after he served a drive-through penalty after squadmate Hugo de Sadeleer overtook under the yellow flags.

Albuquerque then hit back, reducing the arrears to nine seconds with 10 minutes to go. The Portuguese driver continued to catch the #22 car into the dying stages, eventually passing the Oreca on the penultimate lap and pulling away to score a famous victory.

Hirakawa crossed the line to claim second for G-Drive, while Anders Fjordbach drove an impressive pair of stints in the #49 High Class Dallara to secure third place, an impressive result for the Italian manufacturer’s debut in the series.

After starting 28th on the grid, the #40 Graff Oreca crossed the line in fourth place, after Richard Bradley atoned for his qualifying faux-pas through putting in a strong first stint to end up in the lead prior to the team’s driver change.

The #2 United Autosports Ligier was dominant in the LMP3 category, as the duo of Sean Rayhall and John Falb crossed the line ahead of 360 Racing’s #6 Ligier.

Falb’s spin at Copse with half an hour remaining was the only blot on the team’s copybook all day, and the American finished his stint 41s ahead of 360’s Ross Kaiser.

The battle for the final podium position was hotly contested, but it was the #17 Ultimate Ligier which prevailed over the second United Autosports car, the #3, at the finish.

TF Sport followed up on its pole position by claiming GTE victory with its #90 Aston Martin Vantage.

The #90 fell down the order in the middle stages, but strong stints from Nicki Thiim and Euan Hankey secured the win for Tom Ferrier's team.

The #77 Proton Porsche followed the #90 car home, after Matteo Cairoli emerged ahead of the #99 Beechdean Aston Martin of Ross Gunn in the pits during the final driver changes.