RML AD Group has been forced to withdraw from Round 2 of the 2011 Le Mans Series at Spa-Francorchamps in Belgium following a serious accident in Free Practice on Thursday. Mike Newton was driving the team’s Honda Performance Development HPD ARX-01 when the car was clipped into a spin by one of the leading LMP1 diesel prototypes.

The session was instantly brought to a close while marshals and the circuit’s medical staff attended at the site of the accident. Despite the severity of the impact, Mike remained conscious for most of the time, and was taken immediately to the circuit medical centre for a preliminary examination.

I feel enormously grateful that the safety systems all worked so well.

“Mike hasn’t got any lasting injuries from the accident,” said a relieved Phil Barker, Team Manager at RML. “He is bruised and shaken up, but we have to be very grateful that there wasn’t anything more serious. He’ll be feeling very sore for a few weeks, and the microphone hit him in the face, so he has some cuts and bruises, but he should make a full and fairly swift recovery.”

“We would like to extend our thanks to the marshals, doctors and staff here at the circuit medical centre for their fast and very professional action, and also to the specialists at Verviers. Mike underwent a series of tests and scans to his head, neck, chest, abdomen, lower back and right leg. Thankfully, there was nothing broken and no internal injuries. They released him late last night and he was back in the hotel by just after ten.”

The accident took place on the entry into Turn 12, known as Pif-Paf. Mike had exited the previous sweeping double left-hander at Pouhon on the racing line, and was heading down the short straight towards Pif-Paf, steadily moving across to take up the correct approach for the right-left combination. Pedro Lamy in the #9 Peugeot 908 LMP1, travelling significantly quicker that the LMP2 HPD, had exited Pouhon about 40 metres behind Mike. By the mid-point on the short straight, Mike had already crossed the centre line and, as instructed in the drivers’ briefing, was holding his course. With two options facing him, Lamy elected to press forwards into the narrowing gap down the left hand side of the HPD. However, even before he was alongside the #36, his left wheels were already off the track and moving onto the grass. Reacting instinctively, Lamy steered back onto the circuit, hitting the RML HPD in the side, just behind the front wheel. The impact threw the HPD into the beginnings of a spin, and as the Peugeot moved across the front, the two cars made contact again.

From that point, neither driver was in control. The Peugeot spun clockwise, across the tarmac run-off, and made heavy rearward impact with the tyre-wall. Mike, by then a passenger in the HPD, ploughed head-long into a blunt-fronted stack of tyres protecting the Armco barriers on the outside of the bend. The car then reared skyward, until almost vertical, before crashing back down amid a tangle of tyres, debris, and lengths of the conveyor-belt webbing used to contain the tyre wall. 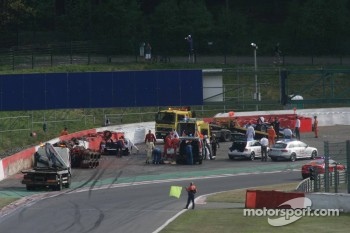 “I’m feeling pretty sore. I’ve got a lot of bangs, bruises and strains, but I’m very glad to be here in one piece,” said Mike Newton. “All the scans were fine, and they checked me over from top to bottom – head and skull, neck, torso, back and legs. All the tests came back clear. I feel enormously grateful that the safety systems all worked so well. The new Arai GP-6 carbon fibre helmet is virtually unscathed, and thanks to the HANS device, I sustained no neck damage. It was also great to see that the Belgian marshals uphold the international tradition of the best trackside support.” Mike is Vice Chairman of the British Motorsport Marshals Club.

Thomas Erdos and Mike Newton have raced together for more than eight years, and the Brazilian was very upset by the accident, and also by the cause. “That was simply outrageous driving,” he stated. “Because of the problems we have with the class structure at the moment, the closing speeds are simply too high, and some racing incidents are inevitable, but on this occasion, that was simply inexcusable.”

Ben Collins, who is co-driving with Mike and Tommy this year, was also unimpressed. “Motor racing inherently carries risks and drivers take those risks on a regular basis, especially when they’re overtaking slower cars in different classes. Being able to predict what the driver of the slower car is going to do can reduce that risk to zero, which is why Mike has carried the respect of everyone in the Series for the best part of a decade – because he’s a safe, predictable and experienced driver.”

“Mike was following the racing line yesterday, and travelling at around 265 kph (165 mph). He was doing exactly what all the drivers are instructed to do in the pre-race briefings, and leaving plenty of room for a faster car to overtake safely. What happened yesterday is best described simply as a thoughtless accident. Pedro Lamy in the LMP1 Peugeot went to the wrong side of the track and placed himself in a ridiculous position with two wheels on the dirt, and then wiped Mike out on the straight, pure and simple. This happened in testing when there’s no possible reward for taking unjustifiable risks. That put the man in hospital, the car in the skip, and ended our weekend. I'm just glad Mike is OK.”

“Mike is not only an esteemed racing driver, but he is also our Chief Executive,” said Pauline Norstrom, Motorsport and Marketing Director of AD Group. “He is vitally important to us, and I’d like to thank everyone involved in ensuring Mike’s safety, not only this weekend, but every time he goes racing. We owe a huge debt of gratitude to everyone in RML, here at the circuit, and at the local medical facilities. There’s a no-compromise approach to safety in motor racing, and that has paid off for us this weekend.” AD Group has 30 guests at Spa for the event, who have no doubt been impressed to see Mike back at the circuit so soon and displaying his characteristic good humour and resilience.

We would like to extend our thanks to the marshals, doctors and staff here at the circuit.

The important consideration is that Mike Newton is safe and well, but the same cannot be said for the car. With the Le Mans 24 Hours just five weeks away the team must now concentrate on preparations for the race.

“The tub is badly damaged, and it’s 50/50 at the moment whether or not it’s salvageable,” admitted Phil Barker. “The car went into the tyres with considerable force and there’s lots of damage. It will be necessary to examine the tub using ultrasound, to ensure that there hasn’t been any delaminating to the carbon fibre, but we have a Le Mans shakedown scheduled for 31st May, and that remains our target. However, we are certainly not in a position to put the car back together again safely this weekend, so we have officially withdrawn from this race.".