22-year-old Tincknell will pilot the Kent-based outfit’s Zytek-Nissan at all five rounds of the European Le Mans Series.

British rising star Harry Tincknell will join Jota Sport for an assault on two of sportscar racing’s greatest prizes. 22-year-old Tincknell will pilot the Kent-based outfit’s Zytek-Nissan at all five rounds of the European Le Mans Series (ELMS) and lead their annual assault on the blue riband Le Mans 24 Hours. 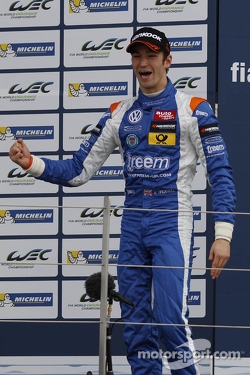 While still in his teens, Tincknell stepped up to British Formula 3 in 2011. He returned to the category the following year before challenging himself further in 2013 by competing in the FIA European Formula 3 Championship with Team Carlin. Again Tincknell shone, scoring race victory in his home event at Silverstone on the way to fifth in the standings.

The Briton makes the progression to endurance racing in 2014 under the expert guidance of Allan McNish. The three-time Le Mans 24 Hours winner and reigning FIA World Endurance champion believes Jota Sport is the ideal home for Tincknell. “Sportscar racing is a natural progression for young drivers,” commented McNish. “It requires speed and consistency, both of which Harry undoubtedly has.

“The addition of Harry to our 2014 line-up is great news for Jota Sport,” enthused Team Principal Sam Hignett. “He’s a hungry young driver with bags of experience, and I’m sure that will translate into an excellent sportscar racer. There’s a wealth of talented guys emerging from single-seaters at the moment and, in Harry, we feel we’ve landed one of the best.”

Tincknell is set to make his competitive debut in the season-opening ELMS race at Silverstone on 19 April together with the 2014 season kick-off of the FIA Formula 3 European Championship.

42 entries announced for the 2014 season