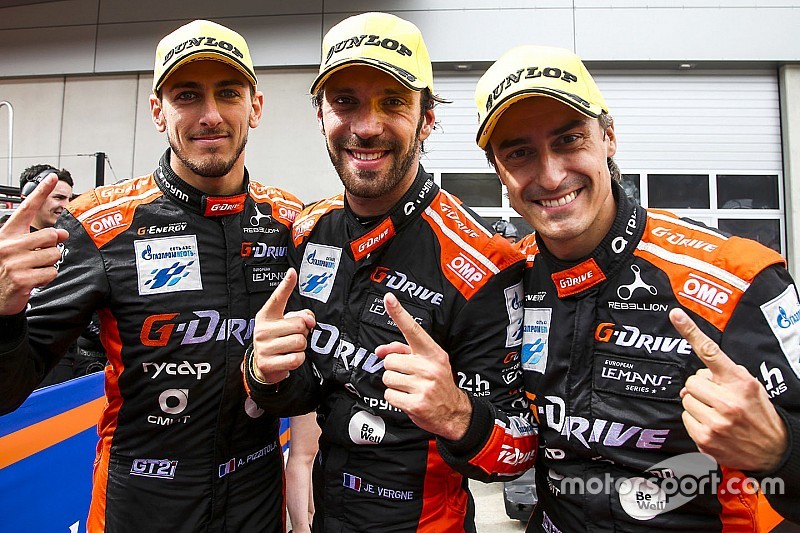 The #26 G-Drive Oreca had to work its way through the field after it switched to an alternative strategy, as Roman Rusinov jumped the start and was given a drive-through penalty.

Once Andrea Pizzitola took the wheel, he worked his way through the pack, helped by pitting under full course yellow periods, before handing over to newly-crowned Formula E champion Jean-Eric Vergne.

The Duqueine Engineering Oreca driven by Nelson Panciatici, Nico Jamin and Pierre Ragues, took the lead at the start of the race as Ragues overtook the polesitting IDEC Sport Oreca of Paul Lafargue.

From there, Ragues built a gap to the rest of the pack before handing over to Jamin. By the halfway mark, the gap had built up to almost half a minute to the #24 Racing Engineering Oreca.

Rain arrived at the halfway mark, and although it was not significant enough to tempt teams to switch to wet tyres, the more slippery track allowed the Dunlop-fitted cars to close the gap on the Michelin-shod Duqueine entry.

Vergne had to pit for one final time in the final 15 minutes of the race but the former Formula 1 driver was able to retain his lead as he had built a lead of almost a minute by that stage.

Panciatici brought the Duqueine car home second, 19s behind, narrowly fending off the advances of Olivier Pla in the Racing Engineering Oreca he shared with Paul Petit and Norman Nato.

United Autosports' #22 Ligier was the best of the non-Oreca runners in fourth, followed by the #28 IDEC Sport car which was delayed by contact with the #30 AVF Dallara and a subsequent penalty.

UPDATE: The second-placed Duqueine Engineering Oreca was later disqualified from second "because the fuel did not conform to the one indicated by the organiser".

It promotes the Racing Engineering Oreca to second and the United Autosports Ligier to third.

Van Uitert had battled hard for the lead with the #9 AT Racing Ligier of Mikkel Jensen hard in the opening hour but was able to build a gap when Jensen handed over to Alexander Talkanitsa Sr.

But as driver changes, rain, and strategy played out, the #15 car lost a lap of almost a lead in the closing stages, with Garofall coming home five seconds ahead of Alex Kapadia in the #7 Ecurie Ecosse/Nielsen Ligier at the end.

The #13 Inter Europol Competition Ligier finished third after a frantic race-long scrap involving the #7 car, the #17 Ultimate Norma and the #11 Eurointernational Ligier.

GTE class honours went to Gianluca Roda, Giorgio Roda and Matteo Cairoli in the #88 Proton Competition Porsche 911 RSR which led for most of the race.

The polesitting Ferrari 488 GTE driven by Alex MacDowall was the first retirement of the race, but the #55 Spirit of Race car upheld Ferrari honour by finishing second, 8s down on the #88 Proton car.

There was late drama as the #83 Krohn Racing Ferrari had to pit late on after contact, and a drive-through penalty for the #77 Proton Porsche gifted a class podium for the #80 Ebimotors Porsche.