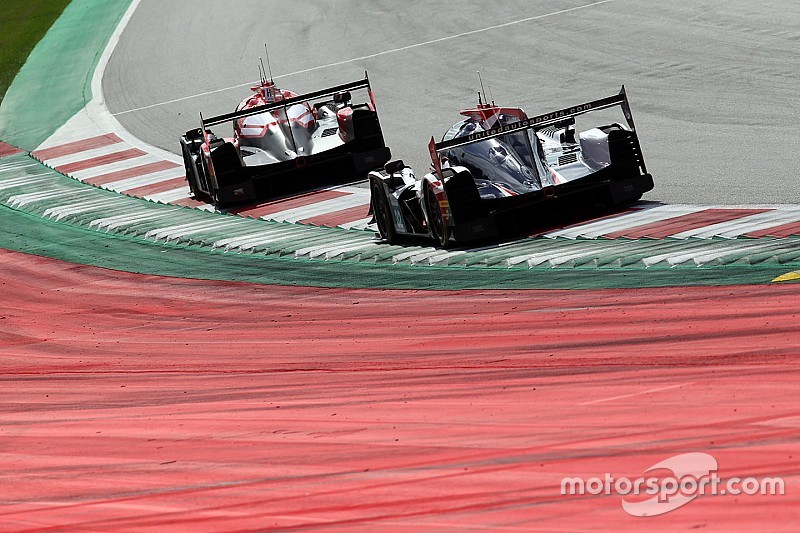 The #32 United Autosports team of Hugo de Sadeleer, Will Owen and Filipe Albuquerque took their second European Le Mans Series victory of the season, holding off a late charge from Leo Roussel at the Red Bull Ring.

Having beaten DragonSpeed's Nicolas Lapierre by 0.005s in qualifying, Roussel started from pole and kept the lead off the line in the #22 G-Drive Racing car, building a decent gap over de Sadeleer.

However, Memo Rojas only rejoined third when he replaced Roussel in the first pitstop cycle, as the #22 was the only team in the top six to change drivers.

That promoted de Sadeleer and Lapierre to first and second, but when Nicolas Minassian replaced Rojas in the second stop, he quickly went on to pass Henrik Hedman and Owen to take the lead.

Roussel took over for the final hour with a 12-second lead over Albuquerque and, with one more stop still scheduled for both teams, the former pitted much earlier than the latter.

The Portuguese driver finally pitted with 20 minutes to go, and comfortably rejoined ahead of Roussel - only for his 12-second gap to shrink to just four by the finish.

Once replacing Lapierre, Hedman steadily lost touch with the leading group before stopping on track due to reportedly running out of fuel, preventing DragonSpeed's third driver Ben Hanley from making an appearance on track.

The podium was completed by the #39 Graff car of Enzo Guibbert, Eric Trouillet and Paul Petit from 13th on the grid, surviving a spin by the latter.

Formula V8 3.5 frontrunners Matevos Isaakyan and Egor Orudzhev completed their endurance racing debut in fifth, the duo seemingly being in contention for the win in the early stages.

Running a different strategy compared to the other frontrunners, the #27 SMP Racing duo twice temporarily took the lead before Isaakyan had to pit because the engine cover of his Dallara P217 came off.

United Autosports doubled up by triumphing in the LMP3 class as well.

While Mikkel Jensen dominated the first stint of the race in his #9 AT Racing entry, the team fell out of contention once he gave up driving duties.

The #11 EuroInternational car led much of the race afterwards only for John Falb to take over for the final hour.

While Falb received a stop-and-go penalty at the very end, he rejoined just ahead of the #11, scoring his and Sean Rayhall's second win of the season.

Giorgio Mondini and Davide Uboldi missed out on the win by 1.7s, as the podium was completed by M.Racing - YMR trio of Antoine Jung, Alexandre Cougnaud and Romano Ricci.

The #18 car took third despite Cougnaud going straight off the track around halfway through and causing the only full-course yellow in the race.

In GTE, the #55 Spirit of Race Ferrari emerged victorious in a race-long duel with the #66 JMW Motorsport, eventually winning by 17 seconds.

The two cars traded the lead several times during the race before Matt Griffin pulled away in the end, the Irishman scoring his first win of the season along with Duncan Cameron and Aaron Scott.

JMW's trio Jody Fannin, Robert Smith and Jonny Cocker were second while an all-Ferrari podium was denied by the #90 TF Sport Aston Martin of Nicki Thiim, Salih Yoluc and Euan Hankey, as the Dane held off Giorgio Roda at the end of the race.