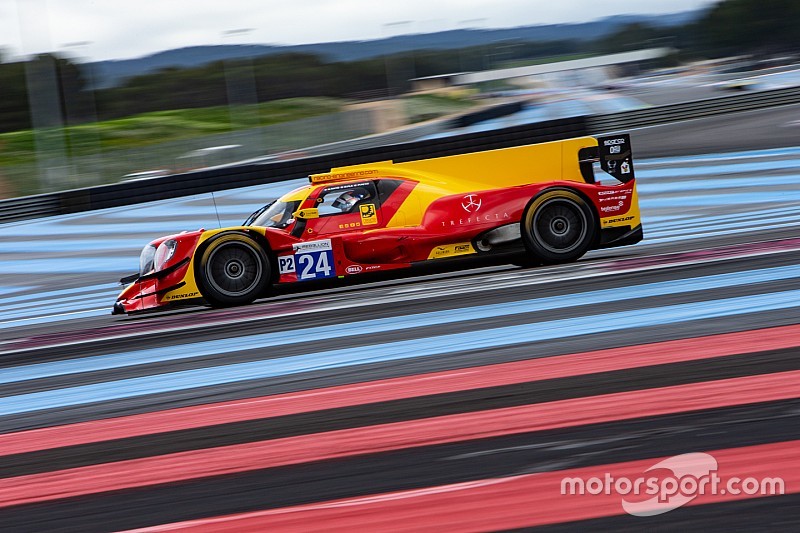 Long-time GP2 and Formula 2 outfit Racing Engineering won on its return to sportscar racing in the opening round of the European Le Mans Series at Paul Ricard.

DragonSpeed’s Nicolas Lapierre made a strong start off the line to pass the #33 TDS Oreca of Perrodo into turn 1, before reeling in polesitting #28 IDEC Sport car driven by Memo Rojas.

The former Toyota LMP1 driver stayed in the lead for the best part of two hours, before a slow puncture dropped his #21 Oreca entry behind the #24 Racing Engineering car.

Lapierre handed over the car to Henrik Hedman, who was involved in a horrific crash with the #55 Spirit of Race Ferrari late in the third hour.

Hedman and Spirit of Race’s Duncan Cameron made contact at Turn 10 and speared off into the barriers, bringing out the race’s sole Full Course Yellow period.

When the race resumed, Signatech’s Andre Negrao started catching Racing Engineering driver Petit, but was unable to find a way past the French driver.

Petit stopped with an hour and 13 minutes to go and handed over the #24 car to Olivier Pla, releasing Negrao in clear air. And thanks to some swift work by the Signatech mechanics, Pierre Thiriet came out ahead of Pla after taking over the #36 Alpine-badged Oreca from Negrao.

Pla, however, managed to reinstate the status quo only a few laps later, passing Thiriet after the Mistral straight with a simple move.

After a quick splash-and-dash with 35 minutes to go, Pla propelled Racing Engineering to a comfortable victory, its first in any category since the 2017 Monaco F2 sprint race.

The #26 G-Drive trio of Roman Rusinov, Andrea Pizzitola and Alexandre Imperatori finished fourth after passing the Signatech entry in the final 30 minutes of the race.

Oreca cars monopolised the top seven positions, with the best non-Oreca being the Panis-Barthez Competition Ligier of Will Stevens, Timothe Buret and Julien Canal in eighth.

The polesitting #88 Proton Porsche of Matteo Cairoli, Giorgio Roda and Gianluca Roda had led much of the race, but came under pressure from the #66 Ferrari of Liam Griffin, Alex MacDowall and Miguel Molina in the dying stages.

Molina managed to pass Cairoli at the chicane in a move that left the Porsche driver well outside the white line. Cairoli cut Turn 7 and emerged ahead of Molina, but the Spaniard managed to make the move stick on the following corner to take the win.

Some way behind the leading duo, Ebimotors’ Fabio Babini, Raymond Narac and Riccardo Pera made it two Porsches on the podium.