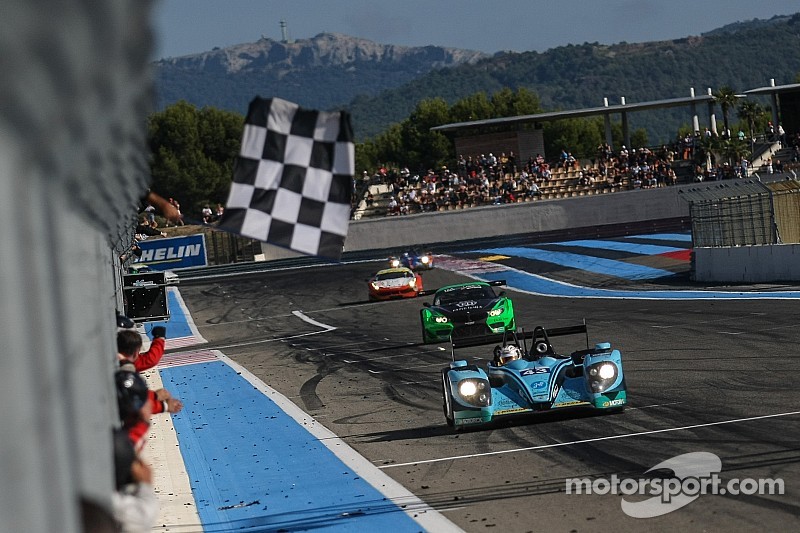 Klien leads team to victory in penultimate round.

NewBlood by Morand Racing scored their first overall win in the penultimate round of the 2014 European Le Mans Series after a dominating and trouble-free race by Pierre Ragues, Gary Hirsch and Christian Klien at the wheel of the number 43 Morgan-Judd BMW with Dunlop tyres.

The Paul Ricard will remain a circuit never to be forgotten by Benoît Morand, his crew (a.k.a “his guys”), drivers and partners Dunlop, Motorex, InCor Holdings and Jeff, with a convincing and undisputed first overall win this year. Three and one were the key and lucky number for NewBlood by Morand Racing all race weekend long: the number 43 Morgan-Judd BMW with Dunlop tyres never left the overall top 3 in practice (third in Practice 1, first in Practice 2), qualifying (third) and race, from third position at the end of lap one to race victory. This first win also acts as a long-deserved reward for the passion and dedication of engineers and mechanics, who perfectly handled the Morgan-Judd-Dunlop package, together with the race strategy and pit stops.

As he did in the previous ELMS round at the Red Bull Ring (Austria), Ragues started the race. In the early laps he maintained the third position and did not lose ground. He took the lead during the first series of pit stops. The strategy was perfect at that moment, since he kept P1 after he actually pitted on lap 24, after 48 minutes of racing. He maintained a consistent drive ahead with an average 20-second gap before he handed over to Gary Hirsch on lap 50 after this superb double stint. “I really focused on the traffic not to lose contact with the leaders. I had a hunch that our strategy was different from the two leading cars, and I really wanted to come back on the track in P1 after my first pit stop. Then we built up a substantial gap. I think that the team can really be proud of their work because they understand the car and tyre strategy very well. Congratulations and thanks to everybody, and also to Onroak Automotive for such a fantastic car. I am very happy for Benoit and his crew, with this victory they can prepare for the final round at Estoril with great serenity. We just scored the first, now it’s time for another win!”

It only took two laps for Hirsch to get back to the race lead, with a remarkable overtaking the leader. Twenty-four laps long he also had a trouble-free stint, holding the race lead until lap 76, when he came back to the pits. It was time for Christian Klien to take the wheel for the final double stint.

“First of all I would like to congratulate the whole team: the mechanics, engineers, Benoit and my team mates. Throughout the season we came closer and closer to victory. Today the team put all things together to make it happen, it feels great to win at last.  I tried to take the max out of my stint and I had to complete a 45-minute sprint race with new tyres. The traffic was not always easy to handle and the pressure came from the fact that I had to make no mistake. I would also like to thank my loved ones and partners who have always believed in me. I am happy and proud to offer them this victory.”

Christian Klien drives for the win

Klien got back on the track in P2 and then started to fill in the gap to the leaders. He eventually took the race lead again after a stunning nose-to-tail battle on lap 89. He immediately pulled away, building up a comfortable lead up and securing the last pit stop 40 minutes before the chequered flag. “We had to wait quite a time before this first win so I think the team really deserves it. The whole race weekend was just perfect. The car worked very well, nobody made any mistake. This is crucial since the series’ standings are very tight. Everybody did a fantastic job today. The end of the race was difficult for me because I completed two stints on hard tyres and I was very happy to see the chequered flag and score at last the team’s first overall win.”

Benoit Morand’s final word for the victory: “We have been longing for this victory for exactly one year, since the last 2013 ELMS round at the Paul Ricard. But being able to win is one thing and actually winning definitely is something else. This race was one of the most difficult this year because of the high level of the grid. The engineers and mechanics did a fantastic job, with an absolutely perfect race strategy. Pierre completed a very fast double stint, Gary drove exactly as we expected, making the difference at the rightest time, and Christian drove perfectly too. This is the first win with our partner InCor Holdings. I also would like to thank my other partners Dunlop, Motorex, Onroak Automotive and Judd. This first victory is also the opportunity for me to thank my wife Gladys, whose support is very important.”

The final round of the 2014 European Le Mans Series will take place at Estoril (Portugal) on October 19.