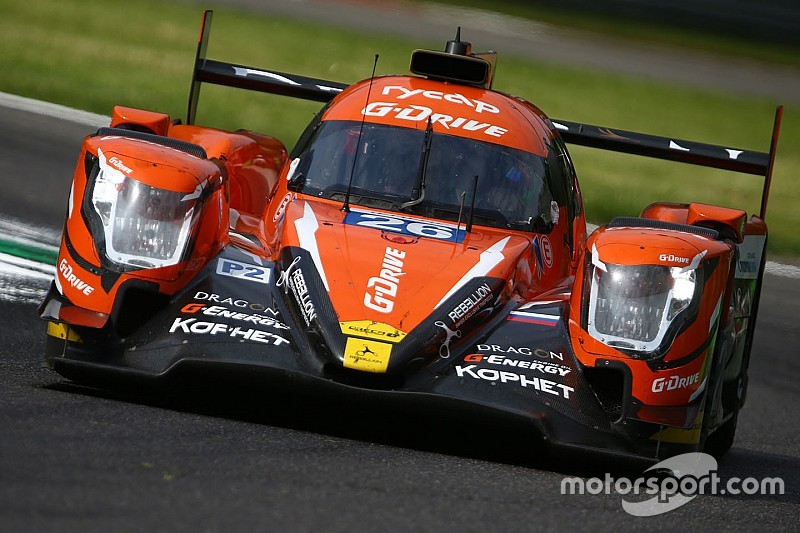 Jean-Eric Vergne, Andrea Pizzitola and Roman Rusinov took their second victory in a week for G-Drive Racing at the second round of the European Le Mans Series at Monza.

Following their 6 Hours of Spa victory in the World Endurance Championship last weekend, the TDS-run Oreca finished 29.8 seconds ahead of the sister #33 car of Loic Duval, Matthieu Vaxiviere and Francois Perrodo after a race interrupted by four safety car periods.

Rusinov ran second in the early laps behind Dragonspeed’s Nicolas Lapierre, until the Frenchman pitted under the first Safety Car, caused when Alexandre Cougnaud crashed his Graff Racing Oreca at the second Lesmo.

Rusinov continued to lead while the Dragonspeed Oreca was delayed by a drive-through penalty for Henrik Hedman punting one of the YMR LMP3s into a spin at Ascari, and held onto the lead after the second intervention of the safety car, when Enzo Guibbert crashed the second Graff car at Ascari.

Pizzitola then took over at the front from Nelson Panciatici’s Duqueine Engineering Oreca, but had a scare after the fourth safety car when the two United Autosport Ligiers of Phil Hanson and Will Owen – which had both stayed out – were mistakenly waved past the safety car.

The error was spotted by race control and Pizzitola made swift work of getting back to the lead, handing over to Vergne for a comfortable victory.

Vaxiviere had set the fastest lap in qualifying, but was ordered to start from the back of the grid after TDS Racing failed the technical inspection. He just held off the #29 IDEC Sport Oreca of Paul-Loup Chatin, who had charged through from ninth after taking over from Memo Rojas and Paul Lafargue.

The succession of mid-race cautions helped Dragonspeed to negate its early time loss and recover to fourth, with Ben Hanley taking advantage of a late fuel stops for Felipe Nasr (Villorba Corse Dallara) and Filipe Albuquerque’s United Autosport entry, which ended up ninth and tenth.

United Autosports pair Sean Rayhall and Jon Falb had been set for victory in LMP3 until a right-rear puncture struck with 10 minutes to go, allowing Giorgio Mondini and Kay van Berlow to capitalise for EuroInternational.

Falb had jumped ahead of Van Berlow at the final round of pitstops and left Van Berlow to defend from Inter Europol Competition’s Martin Hippe when the puncture stuck. Victory for EuroInternational was confirmed when Hippe had to stop for fuel with one lap to go.

The #51 Spirit of Race Ferrari 488 GTE of Matt Griffin, Aaron Scott and Duncan Cameron bounced back from a DNF at Paul Ricard to win on the team’s home turf.

Cameron profited from the flurry of cautions to lead by over a minute from the cluster of chasing Porsches, headed by the #77 Proton Competition example of Marc Lieb, Marvin Dienst and Christian Ried.

The sister #88 featuring Gianmaria Bruni had occupied second position until a drive-through penalty for Gianluca Roda tipping the #20 Racing for Poland LMP3 car into the gravel at Ascari demoted it to fourth, behind the pole-sitting Ebimotors Porsche of Ricardo Pera, Fabio Babini and Raymond Narac.