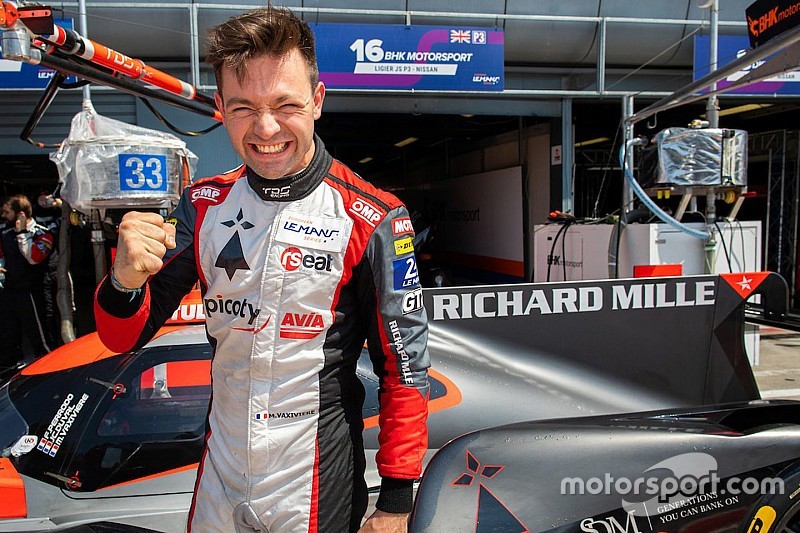 Vaxiviere set the early pace in LMP2 qualifying with a time of 1m35.456s before a red flag was deployed with two minutes and 47 seconds left on the clock.

The reason for the interruption wasn’t immediately clear, with all cars safely returning to the pitlane, and the session resumed soon after without much delay.

Vaxiviere elected not to return to the track for a final effort and the gamble paid off as Ate De Jong crashed at the exit of Parabolica, preventing the majority of drivers from improving upon their first runs.

As such, the Frenchman’s previous effort was good enough to put the #33 Oreca on pole by 0.381s from the #21 DragonSpeed Oreca of Ben Hanley.

2016 WEC LMP2 champion Gustavo Menezes was third in the #31 APR Rebellion Oreca, marginally ahead of the #29 Duqueine Engineering Oreca driven by Nelson Panciatici.

Panciatici was the only frontrunner to improve after the red flag, demoting the #26 G-Drive Oreca of ELMS debutant Jean-Eric Vergne to fifth on the grid.

Felipe Albuquerque set the sixth fastest time in the #2 United Autosports, leading the charge for Ligier in an Oreca-dominated field.

Matthew Lahaye claimed pole position for Ultimate Racing in the LMP3 class with a late flyer, demoting the M Racing-YMR of David Droux to second position.

Droux held the top spot in the #19 Norma heading into the final moments of the qualifying session, before a flurry of late times dropped him down the order.

He retook the top spot in the timesheets with a 1m45.640s lap, only for Lahaye to steal first place by going quicker still in the #17 Norma.

The two drivers were separated by 0.224s, ensuring an all-Norma front row.

Mikkel Jensen was third for AT Racing, a mere 0.005s behind Droux, and 0.062s clear of the #2 United Autosports Ligier driven by Sean Rayhall.

Pera edged out the #88 Proton Porsche of Gianmaria Bruni by just 0.018s in a tight qualifying session, with Matthew Griffin slotting another 0.63s adrift in the #55 Spirit of Race Ferrari.