Since unloading for practice on Friday, both Team Peugeot Total 908 HDi FAPs have been lightning quick around the historic Autodromo Nazionale Monza circuit. That didn't change today as Nicolas Minassian claimed the pole position for Sunday's Monza ...

Since unloading for practice on Friday, both Team Peugeot Total 908 HDi FAPs have been lightning quick around the historic Autodromo Nazionale Monza circuit. That didn't change today as Nicolas Minassian claimed the pole position for Sunday's Monza 1000km, round two of the 2008 Le Mans Series season. 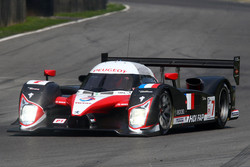 Minassian, who shares the No. 7 car with Spaniard Marc Gene, found three clear laps around the 10-turn, 3.6-mile circuit, improving his lap time on each attempt. Lamy in the No. 8 machine was slowed while dicing through traffic, thus ending up nearly a half-second behind the pole-sitter's time.

"It's easy when you have a very good car," Minassian said. "We worked well with Marc Gen and the team during the free practice sessions. Now that the car is reliable, we can explore the full potential of the 908, the car is really fast. The engine, chassis and brakes are fantastic."

Lamy and co-driver Stephane Sarrazin suffered bad luck in the opening round in Barcelona, getting collected in an accident but soldiering on to finish 12th overall. The defending series champions are hoping to have a less eventful race this time out. But once again, they'll face the might of the Audi Sport Team Joest R10 TDIs.

"Overall the outcome today is very positive, because when we got to Monza we could have expected the gaps to the Audis to be smaller than at Barcelona," team manager Serge Saulnier said. "They remain quite substantial and I hope that this will give us a little room for maneuver during the pit stops or if there are safety car periods if there are any incidents in the race."

Dindo Capello, in his home race, was the best of the Audi bunch, clocking a 1:33.193 in his diesel-powered machine. Capello, like Lamy, was caught in traffic during his run.

"My first lap was the fastest one because on the second - which was better up to that point in time - I got caught in traffic," Capello explained. "But more than two, three tenths of a second wouldn't have been possible and for pole it definitely wouldn't have been enough. It'll be a difficult race for us. We need to stay close to the Peugeots and hope for a good strategy and quick pit stops." 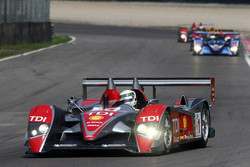 Indeed, like in Barcelona, the Audis have been unable to match the pace of the Peugeots, in qualifying or even in the race. Capello and co-driver Allan McNish will be looking to change that though, especially considering the duo's vast experience behind the wheel of the R10 TDI.

"Of course I'd have liked to beat Dindo at his home race in qualifying," Rockenfeller said. "It was very close, but in the Ascari chicane I made a small mistake. Still, I believe we can be satisfied. Our R10 TDI feels good. I'm convinced we've got a safe car for the race. If we manage a consistent, smooth race, we can score a lot of points, as we did at Barcelona. And that's our goal."

After scoring a rather surprising third place in its debut race, the Charouz Racing Systems Lola B06/80 Aston Martin continued its success in qualifying today, clocking the fifth best time, the best of the gasoline-fueled cars. Stefan Mucke lapped the circuit in a time of 1:34.170, over 2.7 seconds slower than Minassian's pole time. Mucke and co-driver Jan Charouz are in solid shape for the race tomorrow.

"It would have been nice to push the turbo diesels like we had done at Barcelona," Mucke said. "With the car only having made its debut three weeks ago, the team have been concentrating on the development and performance of the car. With the majority of the season still ahead including the highlight - 24 Hours of Le Mans, there is still a lot of racing ahead."

The No. 6 Team Oreca Matmut Courage-Oreca LC70 Judd of Olivier Panis and Nicolas Lapierre was sixth quickest, ahead of the sister No. 5 entry of Stephane Ortelli and Soheil Ayari. The No. 14 Creation AIM CA07 of Jamie Campbell-Walter and Stuart Hall was originally classified in seventh, but the car has since been withdrawn following a violent crash by Campbell-Walter in qualifying. Hall is expected to move to the team's other car, joining Robbie Kerr and Bruce Jouanny in the No. 15. 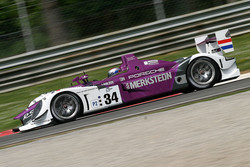 After their debut victory in Barcelona, Van Merksteijn Motorsport is hoping to continue the same form this weekend. The Dutch team is off to a great start, claiming the LM P2 class pole. Jos Verstappen clocked a 1:36.842 lap time in the purple and white Porsche RS Spyder to line-up 10th overall. He and co-driver/owner Peter van Merksteijn will lead a Porsche 1-2-3 in class to the green on Sunday.

"Our car is more suited for short and twisty tracks, but in general, the balance was good", Verstappen said. "You can gain some time under braking when the balance of the car is good and that is what we focused on during the free practice sessions. My qualifying lap was good as well, I didn't make any mistakes. The battle in the class will be very hard, especially with the other Porsches."

Horag Racing's RS Spyder of Fredy Lienhard, Didier Theys and Jan Lammers was second best, a full second back from Verstappen. Jon Nielsen and Casper Elgaard in the Essex Racing Porsche rounded out the top-three in P2.

Only four GT1 cars are competing this weekend, after Larbre Competition announced its withdrawal from the series late this week. The French team, which campaigns a Saleen S7R, has turned its focus to its FIA GT and French FFSA GT programs. This now means half-points will be awarded in GT1 this weekend, as there's fewer than five cars entered.

Rob Bell in the Virgo Motorsport Ferrari F430 GT took the pole in LM GT2, clocking a 1:49.006. The Englishman, sharing the Dunlop-shod prancing horse with Gianmaria Bruni, will also be looking for back-to-back victories.

The No. 77 Team Felbermayr Proton Porsche 997 GT3 RSR of Marc Lieb and Alex Davison was second quickest, with the No. 90 Farnbacher Racing Ferrari of Pierre Ehret and Pierre Kaffer rounding out the top-three.

Forty-five cars took time in qualifying as a few teams withdrew late this week. In addition to the Larbre Saleen, the second Epsilon-Euskadi P1 coupe didn't make it to the track. Neither did the James Watt Automotive Aston Martin Vantage. The Cytosport Lola Judd of Greg Pickett and Klaus Graf was also withdrawn because of clashing business commitments for team owner Pickett.

The 173-lap or six-hour race gets underway at 12:50 p.m. GMT +1 on Sunday. Motorsport.com will provide race updates throughout the 1000kms of action.