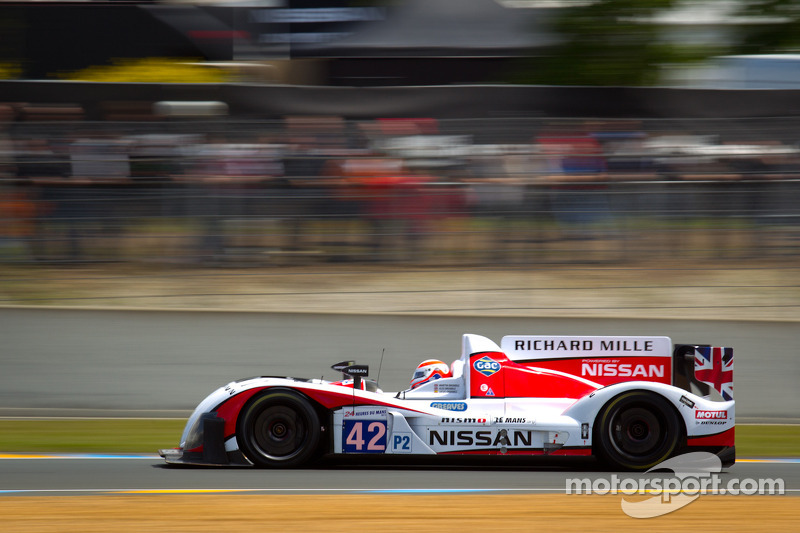 The grid is disappointingly small, but the scene is nonetheless set for a highly competitive second round of the European Le Mans Series at Donington Park in the UK. Eight of the nine LMP2 cars entered here also appeared in the very close class battle at Le Mans last month, and times from free practice so far suggest the top three podium positions will be very closely contested indeed.

Topping the timesheets with a 1:21.010 was the Greaves Motorsport trio of Alex Brundle, Lucas Ordonez and Tom Kimber-Smith. “The Zytek chassis is good here, but the Morgan OAKs were strong in the wet yesterday and the Orecas aren't far behind either,” said Brundle. Confirming the Zytek car's strength, Spa WEC race winners Sam Hancock and Simon Dolan of Jota Sport clocked the morning's second-fastest time, just eight-hundreths of a second behind Greaves.

Matthieu Lahaye put the Judd-engined Morgan-OAK third, with a time of 1:21.111, over three seconds quicker than the ninth-place Nissan-engined example, which is being driven this weekend by Dimitri Enjalbert, Bertrand Baguette and Olivier Pla. The first Oreca on the timesheets was the Sebastien Loeb Racing entry in fourth, with Le Mans LMP1 rivals Stephane Sarrazin and Nicolas Minassian, plus Nicolas Marroc, at the wheel. Although Loeb himself is racing in the French GT series this weekend, team manager Dominique Heinz is keeping a watchful eye on proceedings in the UK.

The only closed-roof coupé entered for this race is the Status Grand Prix Lola. Regular driver Alex Sims is joined for this round by the French Jousse brothers Maxime and Julien, and they put the car fifth in the practice session with a time of 1:21.650. The Oreca trio of Le Mans podium finishers Thiriet by TDS Racing, Murphy Prototypes and Pecom Racing came in sixth, seventh and eighth. Murphy driver Warren Hughes was satisified with the weekend so far. “The car felt very good, and the three different chassis are within a tenth of each other at the head of the field, so it's anybody's race tomorrow, really,” he said.

The GT grid is in even poorer shape than the prototypes, with just a single GTE-Pro entry from JMW Motorsport Ferrari 458. “We're disappointed with the car count alright, but it's out of our hands really,” said driver Jonny Cocker, “but we're definitely not going to cruise. Okay, there's more of an opportunity to try things with setup and tyres than usual, but you only need two cars to have a race, so we'll definitely be pushing hard against the two GTE-Am cars,” he added.

One of those two GTE-Am cars is the IMSA Matmut Porsche of Anthony Pons, Nicolas Armindo and Raymond Narac, who have already finished on the class podium at Le Mans and Paul Ricard and won the class at the Spa WEC round. They're joined by Matt Griffin, Piergiuseppe Perazzini and Marco Cioci in the AF Corse Ferrari 458, who were running well before an early retirment at Le Mans when Perazzini came together with Anthony Davidson's works Toyota on Saturday evening. “It's going to be a bit like a test session all weekend for us really,” said Irishman Griffin, “but you only need two cars to make a race, so our target is to beat the Pro-class Ferrari.”

With a such a small grid count, much talk in the paddock at Donington centred around whether the series' two remaining rounds – scheduled for Brno in the Czech Republic in September and Portimao in Portugal in November – will still go ahead. With numerous GT3-spec championships also racing this weekend, there was no take-up of the ELMS' offer to allow GT3 cars race at Donington, and it remains to be seen whether any will join for the remaining rounds.

The series organisers met with teams individually on the Friday of the event, and renewed their commitment to run the remaining two races, however one team boss that Motorsport.com spoke to indicated that only the Brno round is certain for now.