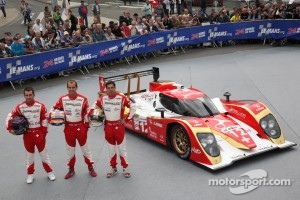 What are your feelings after Toyota has announced their return to Le Mans with a petrol-hybrid LMP1 next year ?

«The prospect of Toyota returning to Le Mans with a car of their own design is exciting for endurance racing. The results that REBELLION Racing have been able to achieve in 2011 through our partnership with TMG have provided a platform upon which Toyota will be able to build in 2012. For ourselves too, we will benefit from the lessons learned through the first year of our partnership and some of the developments that we have planned for the future might be accelerated now that the « works » car will be present. The new Toyota car will be a petrol-hybrid and we expect that it will be at the leading edge of technology with a significant KERS capability, so it will be interesting to see if it can truly challenge the dominance that the diesel powered cars have had in recent years. The demands of endurance racing are very different to those required of for example KERS in Formula 1. The development of a significant KERS capability such as one that might be expected to appear on the Toyota “works” car needs a lot of resources and is not the work of a moment. At REBELLION Racing we are keen to retain our own identity and to focus our resources on building upon the results we have achieved to be the best privateer team in LMP1.»

What are the team’s plans for next year ?

« The team will again be in LMP1 next season. We will unveil the details of our racing programme early in December in Lausanne, Switzerland at the Speedy Garage annual party. That’s an occasion that we’ve used over the past four years as the moment to make public our plans for the year ahead. We are a Swiss team and it is important for us to make that kind of announcement in Switzerland with the media, our partners, friends and fans present. »

Before this announcement, could you tell us more regarding 2012 and your partnership with Toyota ?

« REBELLION Racing will remain the exclusive partner of Toyota Motorsport GmbH for the petrol 3.4 litre RV8KLM engine programme. The partnership with TMG is now deeper and stronger. We had one of our cars in one of TMG’s full-scale wind tunnels a few weeks ago to gain a deeper understanding of the Lola-Toyota LMP1 car and to prepare for future aerodynamic developments. In 2012, TMG will supply REBELLION Racing an upgraded version of the RV8KLM engine on an exclusive basis for the second year in a row. »

Are you pleased with the team’s results this season ?

« The success that REBELLION Racing has enjoyed since our partnership with TMG began has been prodigious. In the first season of our partnership, the team has won the Le Mans Series LMP1 Team Championship and the Le Mans Series Manufacturers Championship for Lola and Toyota. We had 2 first place finishes and 3 other podium finishes in the five races of the Le Mans Series. In the Intercontinental Le Mans Cup, REBELLION Racing is strongly placed as the best petrol team in the field and we could secure third place in the Teams classification at the last round in Zhuhai, which would place us as the best private team behind Peugeot’s and Audi’s factory teams. And don’t forget our 6th place overall finishing at Le Mans 24 Hours, first petrol LMP. So yes, I can be pleased with the 2011 season. »

Correa out of ELMS opener with fracture, Imola F3 "at risk"

Juan Manuel Correa has been ruled out of the opening round of the European Le Mans Series at Paul Ricard after suffering a stress fracture in his left foot.

Prema has announced its full driver line-up for the 2022 European Le Mans Series ahead of next month's season opener at Paul Ricard.