When Christian Klien abruptly slowed while leading and with just four minutes remaining, Simon Dolan inherited the top spot and took the win at Imola.

The 4 Hours of Imola began with Harry Tincknell in the no38 Jota Sport Zytek-Nissan leading the 37 car field into the first corner from pole position. The British driver held the lead for the whole of his stint despite some pressure from the no36 Signatech Alpine of Nelson Panciatici, who had got ahead of the no46 Thiriet by TDS Racing Morgan of Ludovic Badey at the start.

On lap 25 Panciatici pitted to hand over to Paul Loup Chatin and a lap later Tincknell came in to hand over to Simon Dolan. Dolan rejoined in the lead of the race but held a slim 1.1 second advantage which wasn't enough to hold off the 2013 ELMS LMPC champion. An incident not seen on camera saw the lead change on lap 37, with Chatin opening up a 5 second gap over Dolan as the Englishman fell down the order to 5th on lap 41.

On lap 49 there was a further change as Gary Hirsch in the no43 Newblood by Morand Racing overtook the TDS Racing Morgan for 2nd place, with Pierre Thiriet soon coming under pressure from Rodolfo Gonzlez in the Murphy Prototypes Oreca, who was still at the wheel of the no48 machine. Hirsch went wide at the final corner allowing the two drivers following to catch up and the Swiss driver had to defend hard to retain his second place.

On lap 53 Chatin brought the Signatech Alpine into the pits from the lead followed by the rest of the field but the pitstop schedule shuffled the order with Thiriet rejoining at the front of the race ahead of the no43 Newblood by Morand Racing Morgan now with Romain Brandella at the wheel. Chatin was back in 3rd place, just 5.3 seconds behind the leader, with Gonzalez in the no48 machine right behind the Signatech Alpine.

Chatin moved into second ahead of Brandela, and then Gonzalez passed the 3rd placed Morgan, but there was contact as Brandela tried to move out of the way into Turn 1. The manoeuvre was judge to be the fault of Gonzalez and a stop-go penalty was awarded to the no48 Murphy Prototype Oreca as a result but a transmission problem finished the Irish team's chances of a good points haul in Imola. 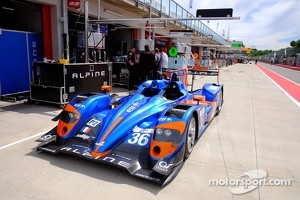 After the next round of pitstops Oliver Webb was now at the wheel of the Signatech Alpine and was leading the race ahead of the no38 Jota Zytek and the no46 Thiriet by TDS Racing Morgan. However a safety car period was called by the Race Director to enable repairs to the plastic kerbs at T13, which came loose after a spin by one of the GTC cars dislodged the kerbing designed to keep the cars from cutting the corner. After several laps behind the safety car the race resumed on Lap 95.

The Thiriet by TDS Racing Morgan also ran into problems when a puncture forced the no46 car into the pits and into the garage to replaced a damaged brake disc. The mechanics made a rapid change and soon had their driver back on track after losing just two laps, but the podium was suddenly a long way off for the winners of the open race at Silverstone.

On lap 114 the no24 Sebastien Loeb Racing Oreca-Nissan was given a stop –go penalty for an unsafe release from the pits and Vincent Capillaire served the penalty two laps later. Michel Frey in the no34 Race Performance Oreca-Judd spun off the track at T8 and after being helped out of the gravel trap made a slow exit into the pitlane.

After Filipe Albuquerque did his stint at the wheel of the Jota Sport Zytek, Simon Dolan was back in the driving seat to complete his allotted driving time. The Englishman was coming under pressure from the no43 Newblood by Morand Racing Morgan of Austrian Christian Klien. For lap after lap Klien tried to find a way around the leading car but Dolan held his nerve and his lead and it wasn't until Lap 125 that Klien went into the lead with a well judged manoeuvre into the first chicane. The Morgan-Judd then pulled out a small gap but Dolan was able to keep in touch with the leading car keeping the gap to less than one second.

It looked like victory was within the grasp of the Swiss team when disaster struck 5 minutes from the chequered flag. Christian Klien's car slowed and stopped at the edge of the circuit, allowing the three cars following to move ahead. The Austrian got the car fired up again and rejoined in 4th place only to stop once again before the chequered flag with engine failure.

By finishing in 5th place Pierre Thiriet, Ludovic Badey and Tristan Gommendy retain their championship lead, currently on 35 points, 8 ahead of Filipe Albuquerque, Simon Dolan and Harry Tincknell. Likewise Thiriet by TDS Racing are 8 points ahead of Jota Sport, with Signatech Alpine 10 points behind the French team.

All of the LMP2 competitors will be taking part in the 2014 24 Heures du Mans on the 14/15 June, while Round 3 of the European Le Mans Series on the 20th July at the Red Bull Ring in Austria.