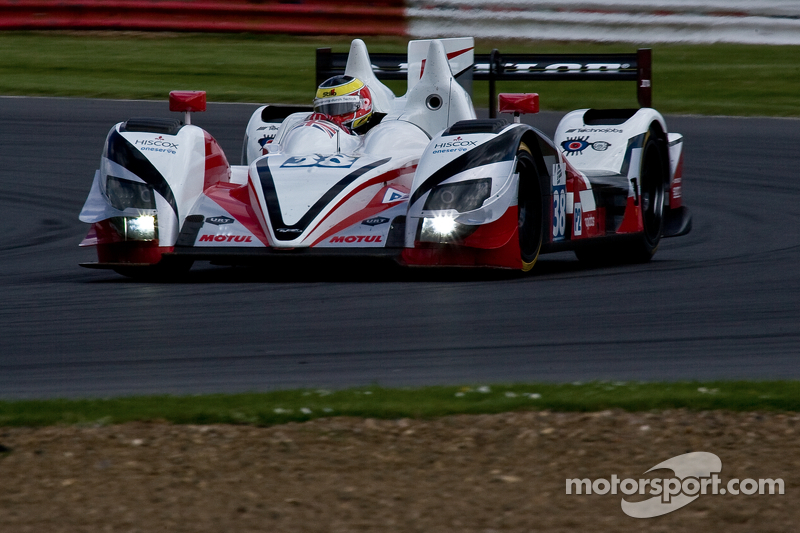 JOTA Sport was cruelly denied a likely second consecutive victory in the opening round of the 2014 European Le Mans Series at a cool and blustery Silverstone today (19 Apr).

The Kent-based team, that had started from pole-position and won the corresponding race 12 months ago at the Northamptonshire Grand Prix venue, looked on course to repeat its success.

But with less than an hour remaining, the Zytek Z11SN of Filipe Albuquerque (P), Simon Dolan (GB) and Harry Tincknell (GB) crashed out of the 4 Hour race around the 18-corner, 3.667-mile Silverstone circuit.

Audi Sport “factory” loanee Albuquerque started from “pole” at the head of the 38-car field courtesy of Tincknell’s stunning ELMS debut fastest time in qualifying – Harry having only just switched from single-seater formula racing. The Portuguese, who was also having his first ever LMP2 sportscar race after three years racing for Audi in DTM, went on to drive a clean, consistently fast 45mins stint, pitting the Zytek Z11SN with a 36-secs lead with JOTA Group Partner Dolan resuming third.

Dolan had driven a sterling 147mins triple stint when, with just 48mins left on the clock with the JOTA Sport Zytek six seconds in the lead and with the Monaco-based Briton pitting at the end of the lap for Tincknell to take over behind the wheel, the team’s race fortunes turned upside down.

Simon, who had overhauled second-placed ex-Formula One driver Christian Klien earlier in the race to lead by 33secs at mid-distance, attempted to lap a GT Ferrari on the outside exiting Chapel Curve.

Despite blue warning lights flashing from the marshal posts beside the track to inform the Ferrari driver a faster car was approaching to overtake, Dolan was left no room on the exit of the corner which caused him to drift onto the grass run-off area.

The JOTA Zytek then speared back across the track, clipping another car, before crashing head on into a concrete wall. Safety officials extracted him from the wreckage before Dolan was taken to the Media Centre for checks before being discharged.

Filipe Albuquerque (P). Age 28. Born & Lives: Coimbra (P): “We have a very good ‘package’ for the remaining ELMS races this season. The Zytek was fantastic to drive with good pace and the team is top-class. My stint was nice and relatively easy apart from when lapping GT traffic. As my stint went on the tyres went off a little in terms of grip causing understeer.

“Unfortunately things like Simon’s accident can happen in racing. Thankfully he’s okay. He’d driven a fantastic stint – strong and consistent. He did a great job and will come back stronger.”

Simon Dolan (GB). Age 44. Born: Chelmsford, Essex. Lives: Monaco (MC): “I’m gutted – especially for the Filipe, Harry and the JOTA team – everyone had worked so hard. The Zytek was fantastic allowing me to run long stints on the tyres. It’s a great, great shame our race ended the way it did. But I’m very grateful to Zytek Engineering for building such a strong car that saved me from any injuries – thankfully I’m only a little bruised and battered.”

Harry Tincknell (GB). Age: 22. Born: Exeter, Devon. Lives: Sidmouth, Devon (GB): “Once I knew Simon was perfectly okay I left the track in a very positive mood. Up until the accident, JOTA Sport had shown its competitiveness in practice, qualifying and the race itself. For me personally, I was delighted with what I achieved even though I didn’t get to drive in the race itself.

“I was actually standing in the pit lane with my helmet on ready to take over from Simon when the crash occurred. Of course the outcome was hugely disappointing but both Filipe and Simon said the Zytek had been a dream to drive in the race which is what I’d found in practice and qualifying. As a team we’ve laid down a good benchmark.”

Sam Hignett. Partner, JOTA Group: “Until Simon’s accident, it had been a dominant performance by JOTA Sport. Harry had been stunning in qualifying, Filipe had driven a brilliant opening race stint and Simon quite honestly had driven the race of his life – the best I’ve ever seen from him. I hope that everyone connected with the series learns from this incident and that we can work with officials so that this kind of incident is eradicated.”