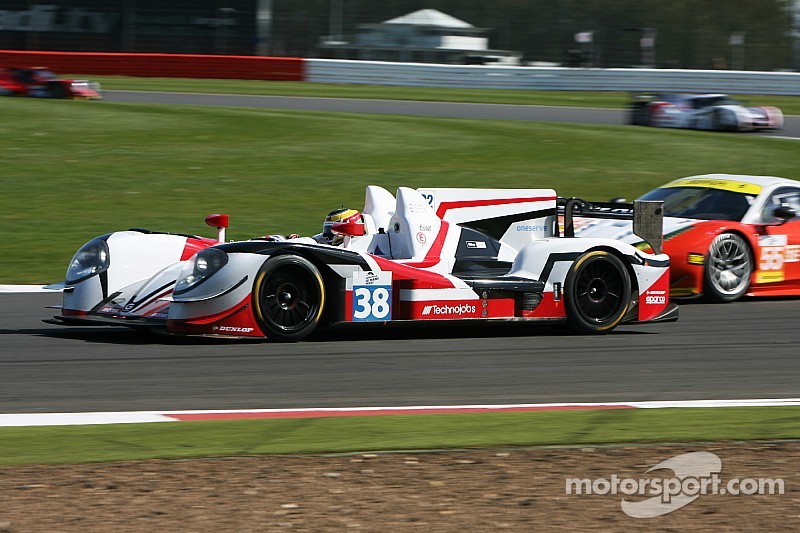 A second consecutive JOTA win looked a distinct possibility until mid-distance when an unscheduled pit-stop for bodywork repairs cost them dearly.

The British team romped home to a dominant FIA World Endurance Championship triumph at Spa-Francorchamps (2 May), was denied victory in the Silverstone ELMS “opener” by a mere 0.370secs and has now recorded another rostrum finish to lie third in the ELMS standings. These early outstanding accomplishments in 2015 are what JOTA hopes will be a successful defence of its LM P2 title in next month’s Le Mans 24 Hours (13-14 June).

I had an encounter with a GT class Ferrari.

Audi Sport “factory” driver Albuquerque claimed his second and JOTA’s third consecutive pole-position around the 3.081-mile Imola track, renamed Autodromo Enzo & Dino Ferrari in 1988. The Portuguese driver’s best lap was an incredible 1.571secs faster than the second-fastest car with his second quickest time, 0.7secs faster than anyone else.

Tincknell took the start in the Gibson 015S Nissan and impressively built up a lead of almost 20secs with 35mins gone before a Safety Car eradicated his lead. At one-quarter distance, the Nissan NISMO “factory” driver led the field by 31secs, eking it out to 42secs by the time he handed the Dunlop-shod Gibson over to Dolan on 90mins.

“Sportsman” driver Dolan held a seven seconds lead at mid-distance but a wayward Ferrari, continually ignoring waved blue flags warning him of a faster car approaching, contacted the Gibson, damaging the car’s nose section. When Simon went over the kerb at Variante Alta moments later, the front left bodywork dislodged itself forcing Simon to pit for repairs and dropping to fourth.

Dolan went on to drive a good, consistent double stint before Albuquerque took over for the final 45mins, JOTA moving up one place to third after a faster final pit-stop. Filipe drove a rapid final stint, sometimes over four seconds a lap quicker than the eventual winner and ultimately took the chequered flag third despite a late “splash and dash” for fuel on the penultimate lap. JOTA Sport’s next outing is when Dolan plus Mitch Evans (NZL) and Oliver Turvey (GB) take part in the official Le Mans 24 Hour race test day on 31 May.

Simon Dolan (GB). Age 45. Born: Chelmsford, Essex. Lives: Monaco (MC): “I had an encounter with a GT class Ferrari. He turned in on me, which damaged the front nose. He was taking no notice of the blue flags being waved at him to warn him I was trying to get past. It was an extremely disappointing way to be ruled out of fighting, for what looked for a long time, our first ELMS win of 2015.”

Filipe Albuquerque (P). Age 29. Born & Lives: Coimbra (P): “I was very pleased with my pole position if a little surprised with the margin to the next fastest car. I did the last stint and overtook the Greaves car in the pits. I pushed really hard after the second-placed car and brought the gap down but then had to pit for a splash of fuel right at the end. The ELMS is even more competitive this year as the opening two races have shown.”

Harry Tincknell (GB). Age: 23. Born: Exeter, Devon. Lives: Sidmouth, Devon (GB): “I got the lead at the start, managed the gap to the second-placed car nicely but then the Safety Car came out. I couldn’t actually see why it was out. That cost me a lot of time, so I just had to remain focussed and rebuild our advantage. But we can be happy going forward from here for the rest of the ELMS season. I’m certain that the JOTA Sport team will be strong at Le Mans and I’ll obviously be taking a massive interest in their race from the Nissan NISMO LM P1 garage.”

Sam Hignett - Partner, JOTA Group: “A Safety Car period to ‘clean’ the track I thought was a little excessive which cost us most of Harry’s hard-driven 40secs lead. Then a GT Ferrari that totally failed to respect blue flags hit Simon. His manoeuvres go unpunished but Simon had to make an unscheduled pit-stop to repair the front fender that ultimately came off. We only changed the right hand tyres when Filipe took over from Simon which enabled us to leapfrog the Greaves car. We pitted at the end to take on a splash of fuel due to our track position relative to the leader when he did an extra lap more than we were expecting.

“We get back to our Frant base this week and immediately switch our attention to Le Mans. Our truck will get back to our workshop in Frant on Tuesday evening and then it must leave for France on the Thursday of the following week. In which time we will strip the Gibson down completely and rebuild it. So there isn’t a huge amount of time to turn everything around ready for the test day at the end of the month.”

A first win for the new ORECA 05 with Thiriet by TDS Racing !