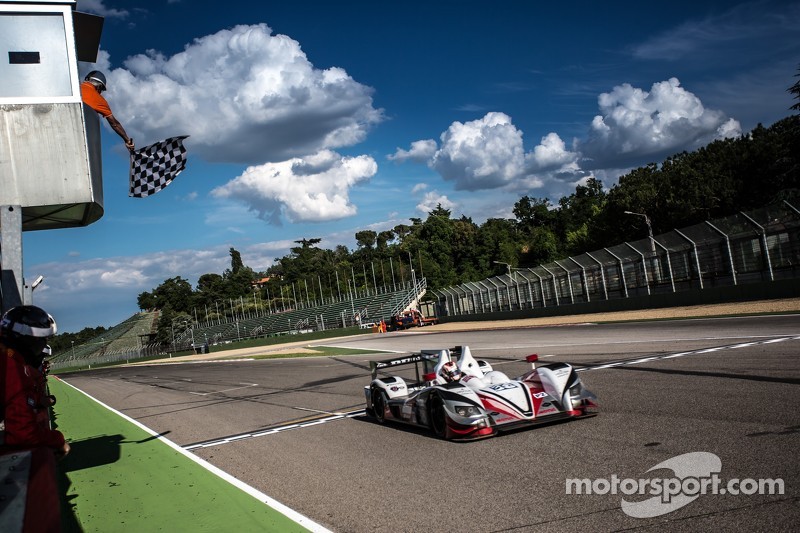 Dolan, Tincknell and Albuquerque bounce back into title contention

JOTA Sport stormed to a fantastic if last gasp victory in the second round of the European Le Mans Series in Italy today (18 May). Simon Dolan, Harry Tincknell and Filipe Albuquerque recorded the British team’s first ELMS win of the season with a 28.860-secs victory in the Imola 4 Hours at the wheel of their Zytek Z11SN.

The trio now lie second in the Driver’s standings with JOTA also second in the Team’s championship after two races just eight points down on the leaders despite the team’s unfortunate non-finish in the opening Silverstone race when leader Dolan was forced off the track.

Having secured pole-position for the Silverstone opener courtesy of Tincknell, this time it was Albuquerque who netted “pole” around the 22-corner, 3.05-mile Autodromo Internazionale Enzo e Dino Ferrari track near Bologna in qualifying earlier in the day.

The start signal for the 4 Hours race was given by reigning FIA World Endurance Champion Allan McNish, mentor to the pole-starting Tincknell on the 37-car grid, Harry actually making his ELMS race debut due to not getting into the Zytek at Silverstone.

Tincknell led impressively throughout his stint before making a scheduled pit-stop after 45mins, Dolan taking over and resuming with a three seconds lead after the opening pit-stop phase.

Dolan, handicapped with a “handling” imbalance that effected his pace, pitted for a “full service” – tyres, fuel and a driver change to Albuquerque with a little under 2½hrs remaining – the Portuguese back into the fray placed fifth as a result of the pit-stop.

Albuquerque’s pace was exceptional, Filipe clocking the race’s fastest lap on the two-hour mark, the “factory” Audi Sport “loanee” consistently setting the quickest laps which brought the JOTA Zytek back into the lead before pitting to Dolan with 100mins remaining.

A 13mins Safety Car period to remove debris from the track grouped the field together although Simon was back in to the lead during the final pit-stop phase with an hour to run.

Leader Dolan was driving brilliantly, coping magnificently in the heavy ‘traffic’ and made his final pit-stop for fuel with 40mins remaining. Simon, a “bronze” graded driver, ultimately and unsurprisingly, had to give best to “gold” classified professional driver Christian Klien, an ex-Formula One driver, with 23mins to run.

But with less than four minutes remaining Dolan, having arguably accomplished the “drive” of the race – the Monaco-based Briton and JOTA Sport receiving the unofficial “Spirit of the Race” award by the highly respected Radio Le Mans commentators, forged to the head of the field once more when the leader slowed.

JOTA Sport’s next event is the Le Mans 24 Hour race’s “official” test day on Sunday 1 June – the only opportunity to drive the legendary 8.47-mile track prior to the actual twice-around-the-clock “classic” staged over 14-15 June.

Simon Dolan (GB). Age 44. Born: Chelmsford, Essex. Lives: Monaco (MC):
“I’m so happy with this victory. My first stint after taking over from Harry was dreadful. The combination of an incorrect tyre choice and possibly me not performing to my best caused me to lose out in traffic which dropped me from first to fifth. When I got back into the Zytek for the final stints, our fuel-saving strategy was paying off until the Safety Car came out. Then it was a case of going as fast I possibly could. Christian [Klien] overtook me but I managed to stay with him and I don’t mind admitting I was overjoyed to see him slow in front of me!”

Harry Tincknell (GB). Age: 22. Born: Exeter, Devon. Lives: Sidmouth, Devon (GB):
“It’s a brilliant result for the JOTA Sport team and exactly what was needed following our Silverstone disappointment. Simon did a mega job at the end to stave off Christian for so long and then to stay with him allowing us to capitalise when he had a problem. It was my first start from pole-position in a sportscar race and I heeded Allan McNish’s advice and really had an uneventful opening stint, bringing the Zytek in with a nice lead. It was a roller coaster of a race, one minute we were up and then the next minute we were down but all that matters is that we finished on a high!”

Filipe Albuquerque (P). Age 28. Born & Lives: Coimbra (P):
“I have to admit we were lucky to win today but sometimes you need that. Apart from the win we had pole-position and I also achieved the fastest lap so it shows we were on the pace throughout. Harry did a fantastic opening stint and Simon’s stints at the end, on a track like Imola with the pressure he was under and in a hot ambient temperature, was far from easy. I was happy with the Zytek in my own stint – it was good fun. The car was nicely balanced after we adjusted the tyre pressures. My only real issue was trying to lap one particular LMP2 car when I was leading that ignored the blue flags and that is unacceptable. But in general it was a good stint that allowed me to recover some time.”

Sam Hignett. Partner, JOTA Group:
“It’s a fantastic result and much needed after Silverstone. While it’s JOTA’s second LMP2 podium of the season, it’s actually our team’s fourth from five races if we include our Mazda programme. We were unlucky at times then very lucky at the finish. Certainly the Safety Car phase didn’t help our strategy but we need to analyse the data to discover why we made it difficult for ourselves at times. The team now faces a very quick turn around. Our trucks leave Italy tonight [Sunday], driving back to our base in Kent, where the car will be stripped and rebuilt. It then leaves a week on Tuesday [27 June] for France for the all important ‘test’ day at Le Mans.”

Brundle and ART battle back to finish fourth at Imola