Jota on top in Hungary on Friday 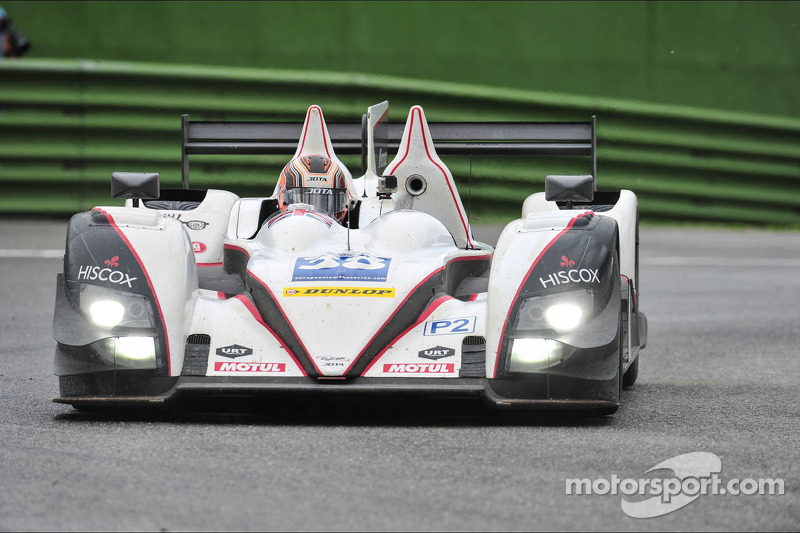 The second free practice session saw the nr36 Signatech Alpine confirm its position as the leader on day one, with Nelson Panciatici improving his morning's best time by nearly one second with a lap of 1m36.634s. However after the session Panciatici was penalised for overtaking under yellow flags and all the lap times for the car were cancelled for the second free practice period.

The nr38 Jota Sport Zytek was promoted to the top spot, with Oliver Turvey's best lap of 1m36.757. It was very close at the top with the nr18 Murphy Prototype, the nr1 Thiriet by TDS Racing, nr34 Race Performance Orecas and nr43 Morand Racing Morgan split by less than 0.3 seconds and setting up an interesting battle for tomorrow's qualifying session.

The nr48 Team Endurance Challenge FLM Oreca of Soheil Ayari edged out the fastest car in the morning session, the nr46 Algarve Pro Racing Team FLM Oreca, with a time of 1m40.659.

The nr66 JMW Motorsport Ferrari 458 of Andrea Bertolini and Joel Camathias confirmed their role as the fastest car in LMGTE, with Bertolini setting a lap of 1m44.844, the Italian improving his best this morning by 0.5 seconds. It was a Ferrari 1-2 with the nr53 RAM Racing 458 of Gunnar Jeannette and Frank Montecalvo in second ahead of the top Porsche, the nr77 Proton Competition 911 GT3 RSR and their RAM Racing sister car, the nr52 458.

In GTC the roles were reversed from this morning for the Russian SMP Racing Ferraris, with Viktor Shaitar setting the fastest lap in the nr69 Ferrari 458 with a 1m46.460, 0.4 seconds ahead of teammate Alexander Frolov in the nr72 car. The nr62 AF Corse Ferrari was third fastest, just ahead of the nr75 Prospeed Porsche and the nr60 Kox Racing Lamborghini.

The first free practice session for the 3 Hours of the Hungaroring saw the nr36 Signatech Alpine of Nelson Panciatici and Pierre Ragues setting the fastest lap in the 60-minute session ahead of tomorrow's penultimate race of the 2013 European Le Mans Series.

Panciatici's time of 1m37.529 was just 0.077 seconds ahead of Brendon Hartley in the nr18 Murphy Prototypes Oreca-Nissan and 0.327s ahead of Oliver Turvey in the nr38 JOTA SPORT Zytek-Nissan.

In LMGTE it was a Ferrari / Porsche battle with the Prancing Horse getting the upper hand in the form of the JMW Motorsport Ferrari 458 Italia of Andrea Bertolini and Joel Camathias finishing the session 0.8 seconds ahead of the nr77 Proton Competition Porsche and 1.2 seconds quicker than the nr75 Prospeed Competition 911.

Qualifying for Round 4 of the 2013 European Le Mans Series takes place at 09:35 (local) tomorrow morning, with the 3 Hours of the Hungaroring getting underway at 16:01, with live streaming of the race at www.europeanlemansseries.com

Montecalvo and Jeannette head to Hungaroring seeking another ELMS podium

Intrepid American duo getting to grips with Hungaroring