Last April, Thiriet by TDS Racing’s success was underlined by the second place finish of Sébastien Loeb Racing, who were making their competition debut.

European Le Mans Series - 6 Hours of Donington Defending the leader status … After a one-two finish in the championship’s first race, four ORECA 03 will take part in the second round event in England. After a convincing performance in the 24 Hours of Le Mans, notably with teams Thiriet by TDS Racing and Pecom Racing on the podium in LMP2, four ORECA 03 will take the start of the 6 Hours of Donington, second round of the 2012 European Le Mans Series. As was the case at the start of the season, ambitions will be high for Thiriet by TDS Racing, Sébastien Loeb Racing, Pecom Racing and Murphy Prototypes. Thiriet by TDS Racing aiming for continuity… 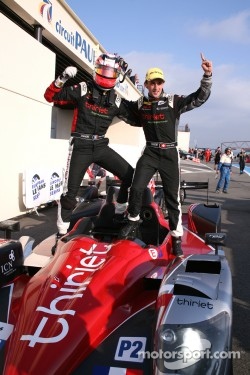 The Thiriet by TDS Racing team started the 2012 season much like they ended the previous: with a victory ! Pole winners and overall winners of the 6 Hours of the Castellet, the Swiss team arrives on British soil as the leaders. At the controls of the No. 46 ORECA 03, Pierre Thiriet and Mathias Beche are hoping to conserve that status. For this, they will be relying on a good dynamic: the two men finished the 24 Hours of Le Mans in second place in their debut performance at the Circuit de la Sarthe. Sébastien Loeb Racing thirsty for victory!

Last April, Thiriet by TDS Racing’s success was underlined by the second place finish of Sébastien Loeb Racing, who were making their competition debut. Since, the team founded by Sébastien Loeb and Dominique Heintz has been accumulating podiums in the French GT Championship and Porsche Matmut Carrera Cup. Although the Alsacian team was not at the start of this year’s 24 Hours of Le Mans, they did participate in the Test Day in early June, running in the top five. At Donington, the driving trio composed of Nicolas Minassian, Stéphane Sarrazin and Nicolas Marroc will again be called to action. « I’m very happy to be back with Sébastien Loeb Racing » admits Stéphane Sarrazin, who raced for TOYOTA Racing in la Sarthe. « To finish on the podium at the Castellet for the team’s first race was a feat. Since then, we completed a good test at Magny-Cours and the team ran well in the Test Day. Our objective will be to run up front…and to possible win! »

Two-time Le Mans Series champion Stéphane Sarrazin has not been to Donington since 2003 but he’s no less confident: «It’s a nice track on which the LMP2 cars will be able to do well. With slow turns and quick corners, the course should suit the ORECA 03. The gaps are close in this class and the fight promises to be tough and at an elevated level. »

The adventure continues for Pecom Racing…

With a double program – FIA World Endurance Championship and European Le Mans Series - Pecom Racing jump started their season at the 24 Hours of Le Mans. After a podium at the 12 Hours of Sebring, the Argentinian team was unlucky at the Castellet and Spa. But a third place finish in the legendary twice around the clock endurance race and in the top three of the FIA-WEC championship, the No. 49 ORECA 03 is ready to go with a quality driving squad composed of Pierre Kaffer, Soheil Ayari and Luis Perez-Companc. The trio has already shown its speed: on the heels of Le Mans, they will be looking to confirm their performance in the European Le Mans Series.

For their first season in LMP2, Murphy Prototypes has quickly found the right rhythm. After a promising debut performance on the Paul Ricard circuit, the Irish team showed well at the 6 Hours of Spa, in the World Endurance Championship. Longtime leaders in the event, the No. 48 ended up on the third step of the podium. At the 24 Hours of Le Mans, the team led by Greg Murphy, although making their debut, led the race before being forced to retire. After a solid performance, Murphy Prototypes is understandably ambitious. « Honestly, I can say that the win is our objective at Donington » admits Jody Firth, who will be joined by Warren Hughes and Luca Moro. « I think I think I’m echoing the team’s sentiments. When you look at how young it is, it’s quite remarkable: this will only be our fourth race ! The team has the experience and know-how to get the most out of the ORECA 03. It’s up to the drivers to do well on track ! Everyone has worked hard on pitstops, strategy and organisation. We saw at Le Mans how much we’ve progressed in this area.»

For Jody Firth, this rendezvous will be special. The British driver will be racing on home soil : « It’s the closest circuit to my home and I watched my father race here starting at age two. So it’s a bit like a second home ! I’m looking forward to being there and to show people what we could have done at Le Mans, that’s to say win. Donington is a quick track which requires full participation from the driver, and a certain amount of courage too. Since the ORECA 03 is easy to driver, this will give us a bit of an advantage over our rivals. Donington is perfect for the ORECA chassis : you need good downforce without losing too much in top speed, and that’s precisely one of the characteristics of the ORECA 03.. »

While Pierre Thiriet and Mathias Beche lead the drivers championship and Thiriet by TDS Racing heads the teams classification, ORECA is currently at the top of the constructors championship with Nissan, a status that Thiriet by TDS Racing, Sébastien Loeb Racing, Pecom Racing and Murphy Prototypes will be aiming to defend in Great Britain. Boutsen Ginion Racing will also be on track with a Formula Le Mans entered in LMPC class.