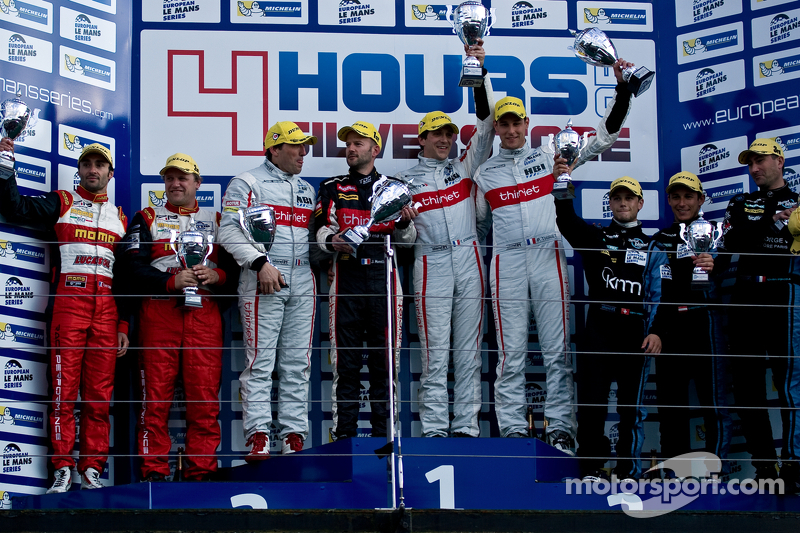 Fans were treated to a riveting finish in the European Le Mans race at Silverstone Saturday.

For the whole of the last two hours of racing the action was at its peak at Silverstone. Tristan Gommendy, driving the No.46 Thiriet by TDS Racing Morgan Nissan was holding third place behind the No.34 Race Performance ORECA 03 Judd and the race-leading No.38 Jota Sport Zytek Z11SN Nissan – a position it had been in since the start of the race.

Forty eight minutes from the end, Jota Sport's Simon Dolan was unfortunately involved in an accident with the No. 50 Larbre Competition and a GTE back marker. He went wide onto the grass and then collided with Larbre's Morgan Judd, the accident ending all hopes of victory for the British team and bringing out the safety car. The driver emerged shocked but unhurt, but the safety car stayed on track for 15 laps while the car and debris were removed.

During this period, the pack and the lap times closed up, meaning drivers were more fired up than ever to capture the lead when the safety car returned to the pit lane. After 106 laps and with just 22 minutes to the chequered flag – the race was on!

Tristan Gommendy was not going to let Michel Frey get away from him, the latter being behind the wheel of the No.34 Race Perfomance entry. Gary Hirsch, who was in turn driving the NewBlood by Morand Racing Morgan Judd in third place, was determined to climb up the rankings. A relentless battle ensued between the three leading prototypes which couldn't have made ​​the end of the first round of the 2014 ELMS more fascinating. After taking the lead of the race on the 112th lap, Tristan Gommendy set about the task despite the heavy traffic from the 35 cars still on the track. Gary Hirsch was getting closer and closer each lap to Michel Frey, and was even on the verge of passing him but the traffic proved too great for him to take anything other than the second spot on the podium.

In LMGTE, following a non-stop fight between the two Ferrari 458 Italias of SMP Racing and AF Corse, it was the Italian team which took the upper hand - the No. 55 AF Corse entry of Duncan Cameron, Matt Griffin (2013 Champion) and Michele Rugolo winning. SMP Racing, winner of the 2013 GTC season, took second place with the No.72 of Andrea Bertolini, Viktor Shaitar and Sergey Zlobin. Third on the LMGTE podium was the No.76 IMSA Performance Matmut Porsche 911 GT3 RSR driven by Raymond Narac, Nicolas Armindo and David Hallyday.

In the GTC class two newcomers to the European championship finished either side of the 2013 class winners, SMP Racing. Team Ukraine took the winners' points thanks to the No.96 Ferrari 458 Italia GT3 being smoothly driven by Andriy Kruglyk, Sergil Chukanov and Italian Alessandro Pier Guidi who finished only 7.4 seconds from the No.73 F458 of the Russian team (Olivier Beretta, David Markozov and Anton Ladygin). Jan Magnussen, Johnny Laursen and Mikkel Mac finished on the third step of the podium and scored their first points for the Formula Racing's Ferrari 457 GT3.