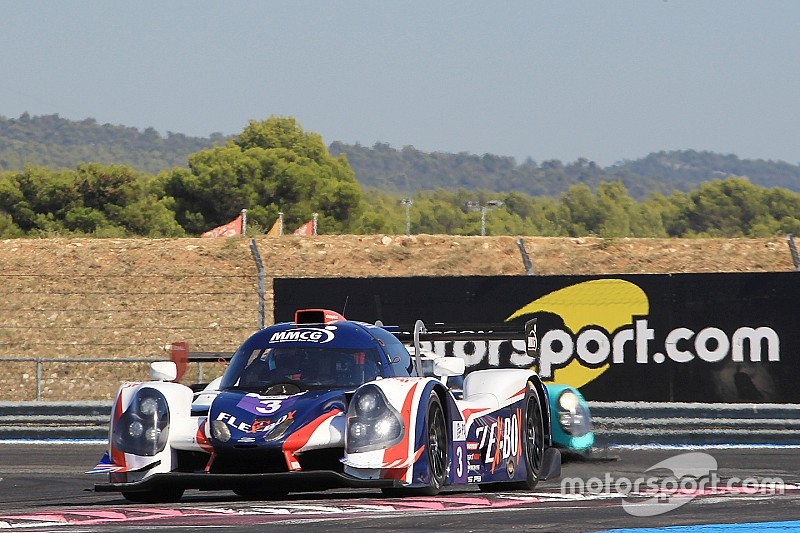 The Anglo-American team, competing in the six-race ELMS for the first time, has enjoyed phenomenal success with its two-car Ligier JS P3 team that also features Matt Bell/Wayne Boyd/Mark Patterson. Eight top-10 placings, that included seven podiums and three wins, have now been achieved following the latest race in Belgium today (25 Sep) while the #2 Ligier of Brundle/England/Guasch has not finished lower than third in the five races run to date.

The #2 Ligier placed second with the #3 car of Bell/Boyd/Patterson third in the 4 Hours of Spa-Francorchamps today – with one race remaining in Portugal next month. Brundle/England/Guasch have accumulated 108-points, 30 points ahead of its nearest rival, and with a maximum of 26 points on offer in Estoril, the trio cannot be overhauled. Bell/Boyd/Patterson now lie seventh in the championship standings, their own championship aspirations having been blighted by sheer bad luck in earlier races this season.

There is still one race to go and our aim is to finish it on a high.

The #3 (Boyd) and #2 (Brundle) Ligiers lined-up in second and fifth positions respectively in the LMP3 class after the exploits of Bell and Brundle in qualifying the previous afternoon around the demanding 4.35-mile Spa-Francorchamps track – Matt denied scoring the #3 car’s second pole of the season by a mere 0.064secs. Brundle and Boyd, Wayne doing the opening stint for the first time this season, ran close together in second and third respectively until Alex, with father Martin an interested spectator, pitted with almost an hour on the clock.

Guasch in the #2 lay 11th while Boyd, who led LMP3 for a lap before pitting to Patterson, placed the #3 ninth after all of the scheduled opening pit-stops – the race at Spa being run in uncharacteristic warm sunshine until light rain briefly fell during the final 30 minutes. England took over the #2 Ligier from Guasch during a safety car period shortly after the halfway mark placed ninth, Patterson taking on fuel and a new set of tyres in the #3 and resuming 13th. England was up to second during the final pit-stop phase before making his stop, while Bell took over the #3 with 52 minutes remaining. With 40 minutes to run, the #2 and #3 Ligiers were placed fifth and sixth respectively but England took the chequered flag second – to secure the title – with Bell, one of the fastest cars on the track during the final hour, a creditable third.

Before the final round of the ELMS in Portugal next month, United Autosports competes in a one-hour British Prototype Cup event (8-9 Oct). The Prototype Cup has adopted the rules and regulations set out by the Automobile Club de l’Ouest (ACO), an organisation that runs the European Le Mans Series (ELMS). United Autosports will enter three Ligier JS P3 sportscars in the Snetterton race.

“It’s a mega feeling to win the LMP3 title – it’s a massive and fully deserved achievement by the team. It’s only nine months or so since United took delivery of its first LMP3 car – so what an awesome job they’ve done. The team has delivered a perfect race after perfect race for us. If we’ve not had the fastest car, then great strategy has brought us into contention. My qualifying run was decent – it wasn’t the peak performance I was looking for. I struggled a little with the car’s balance but we made overnight changes. It was, nevertheless, good enough for a decent start position and I managed to make up places on the first lap – I seem to have made a habit of that this season."

“Coming back to motor racing after a long time away, to win the LMP3 championship in my ELMS debut season and United’s maiden ELMS campaign, is simply unbelievable. We’ve been faultless all year – the drivers and team haven’t put a foot wrong which is why we’ve had five podiums out of five races. Our aim today was to wrap up the title which we accomplished meaning we can now head to Estoril under no pressure.”

“It’s a very nice feeling being an ELMS LMP3 champion! I started the year not knowing Alex or Christian but obviously knew the team well from 2010-11. It has been a wonderful year with the three drivers and the team all working very hard to keep us at the front. This race was no different. We were unfortunate with the Safety Car that gave the eventual winners a big lead but we had ourselves a good race car. Being such an ultra-competitive series makes it even more satisfying to take the title.”

“It was a tough race in terms of the Safety Cars and Full Course Yellows not particularly working out in our favour so when I got in for the final stint we were a little way down the order. But the strategy from the pit wall put us in the right place at the right time. My pace at the end was pretty good and I’m very happy to be a part of a double podium for the team. In qualifying, the Ligier was brilliant – I was probably caught out a little in that it was so good straight away and so to miss out on pole by such a small margin, knowing there was more in the car, was a little disappointing.”

“It was the first time I’d started an ELMS race and my Ligier felt really good. The first lap was very eventful and having to dodge two LMP2 cars spinning allowed Alex to get ahead of me. Our pace was very similar, we were both on the limit. It was good to get back on the podium and we have our sights set on scoring our first victory at Estoril.”

“Bottom line is that I’m delighted with third place. My first of two consecutive stints was on old tyres and with a full load of fuel, I found it difficult – we weren’t expecting such high track temperatures. My second stint [on new tyres] was great but I lost time behind ‘Pro’ GT car drivers who were difficult to overtake.”

“It’s an unbelievable feeling to have won the LMP3 title and a fantastic accomplishment to claim it in our first year in the category. The entire team and all six drivers have done an impeccable job all year. There is still one race to go and our aim is to finish it on a high.”

“It’s an amazing feeling to have wrapped up the LMP3 title with one race to go. It’s especially nice that 90% of the team members here this weekend has been with United Autosports since we started racing – I’m very proud of every single one of them. Scoring a double podium today is a fantastic way to win the [LMP3] championship but without one of the Safety Cars that benefitted the eventual winning car, we’d be celebrating our second 1-2 finish of the season. Nevertheless, three wins a second and a third is pretty good going for the #2 car. A victory for the #3 Ligier would top off a perfect year.”