An increased grid for round two of the ELMS

The opening round of the 2013 European Le Mans Series saw 23 cars racing on the Silverstone circuit in England on 13th April. However, 28 cars across the four categories will be providing a wonderful spectacle for the ‘tifosi’ on 17 and 18 May when they take to the Autodromo Enzo & Dino Ferrari circuit. The track is situated in the small town of Imola, 40 kilometres east of Bologna.

The top category in the series, LMP2, will on this occasion feature 10 prototypes and 10 teams. Silverstone winner, Jota Sport (No.38 Zytek Z11SN-Nissan – Simon Dolan and Oliver Turvey), will be keen to repeat their performance at the opening round, while the ORECA 03 Nissans of current champions, Thiriet by TDS Racing (Pierre Thiriet-Jonathan Hirschi), Boutsen Ginion Racing (Bastien Brière-Thomas Dagoneau-John Hartshorne), Murphy Prototypes (Brendon Hartley-Mark Patterson) and of Race Performance (Michel Frey-Patric Niederhauser) will be doing all they can to win on Italian soil.

In the Lola camp, DKR Engineering’s No.39 Lola B11/40 of Olivier Porta-Romain Brandela-Stéphane Raffin will be up against a new adversary – HVM Status – with its No.30 Lola B12.80 Coupé which will be driven by, among others, Englishman Jonathan Kennard.

In LMPC the three Formula Le Mans cars keep the same line up as at Silverstone, the crews in the ORECA 09 chassis under the watchful eye of their mentor and advisor, Nicolas Minassian. Soheil Ayari and Anthony Pons at the wheel of the No.38 would no doubt wish to keep the upper hand, but young hopefuls Paul Loup Chatin and Gary Hirsch (No.49) will be more motivated than ever for victory. The Andorran driver Alex Loan will share the No.47 with his French team mate Matthieu Lecuyer. 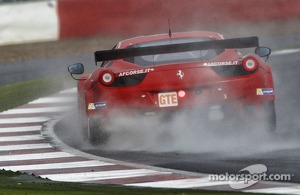 Eight cars and six teams make up the entry list in the LMGTE category. While the only German team, Proton Competition (Porsche 911 GT3RSR- Christian Reid-Gianluca Roda-NickTandy) lead the points’ standings, Ram Racing’s two Ferrari F458 Italias, No.52 and No.53 driven respectively by Johnny Mowlem/ Matt Griffin and Americans Gunnar Jeannette/Frankie Montecalvo, hope to make up lost ground in Italy. A thirdFerrariF458Italiawill be on track from the British JMW Motorsport team (Andrea Bertolini-Joel Camathias).

Prospeed Competition keeps an unchanged line up in itsNo.75 Porsche911 GT3RSR with François Perrodo - Emmanuel Collard- Sebastian Crubilé while IMSA Performance Matmut entrusts its No.67 Porsche911 GT3RSR to the hands of Patrice Milesi who will be accompanied for the Italian round by American Patrick Long. For its home race, the only Italian team on the grid, AF Corse, once again puts its confidence in drivers Yannick Mallegol - Jean-Marc Bachelier - Howard Blankin the No.54 Ferrari F458 Italia and in the 100% local trio of Piergiuseppe Perazzini - Marco Cioci - Federico Leo in the No.55 entry. In GTC, the Italian grid will feature seven cars, five teams and four different manufacturers, compared with only three teams at Silverstone. Ecurie Ecosse, which has the sole BMWZ4(Ollie Millroy - Andrew Smith -Joe Twyman) will want to keep the top spot in the standings, but the four newcomers have every intention of making their mark in the European Le Mans Series. Kox Racing will run the single Lamborghini Gallardo LP600GT3, the No.60 driven by Peter Kox himself and Nico Pronk. Russian team, SPM Racing, is not coming just make up the numbers and enter three Ferrari F458 Italia GT3: No.68 driven by Devi Markozov - Yury Evstigneev - Alexander Frolov; No. 69in the hands of Fabio Babini - Viktor Shaitar - Kirrill Ladygin; No.72 with Maurizio Mediani - Sergey Zlobin - Boris Rotenberg. Momo Megatron DF1’s Audi R8 LMS DF1 (Raffi Bader-Dylan Derdaele-Kuba Giermaziak) which started from pole position at Silverstone, is determined to repeat this in Italy and try to take the overall lead. However, the fight with AF Corse will be tight, the Italian team entering one Ferrari 458 Italia GT3 in the GTC class which currently lies second in the standings for the category.

The second round of the European Le Mans Series will take place at the Autodromo Enzo & Dino Ferrari. The 28 cars on the entry list will be divided into four categories and represent twelve different nationalities. This event will be part of a weekend of racing alongside the FFSA GTTour. Also on track throughout the weekend will be single-seater cars from Classic Formula 3 and Formula XL as well as the Peugeot RCZ Racing Cup.

Zytek wins first race of the European season at Silverstone

Ten Italian drivers for their home round