Against all odds, Alpine secures the European title once again! 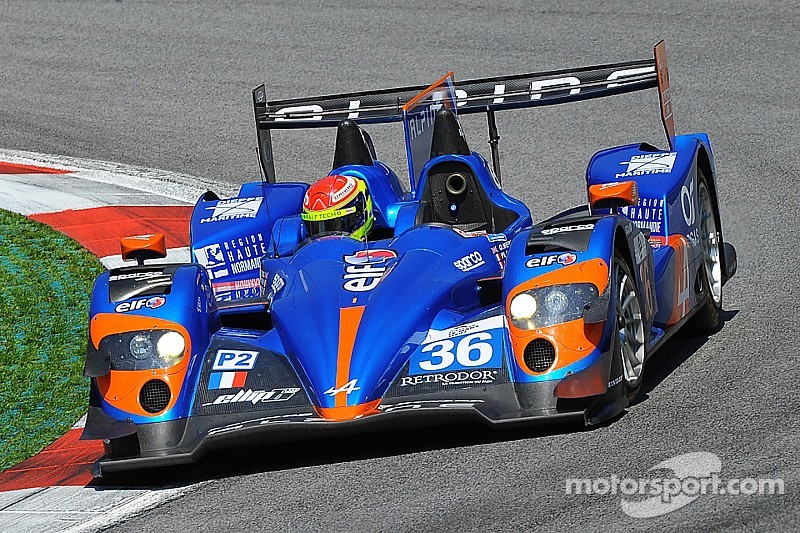 Signatech-Alpine had vowed to fight for victory in the 2014 European Le Mans Series (ELMS) season finale at Estoril in Portugal. Although second place would have sufficed to secure another crown regardless of the results of its rivals, the French outfit nonetheless approached this decisive outing just like any other.

Similarly, as it has done on every occasion since May, the Alpine A450b underlined its ability to compete right up at the sharp end. From third on the starting grid, Nelson Panciatici had already moved up to second by the time the cars reached the first straight.

The Frenchman kept in touch with the leading Zytek all the way through to the first driver change. Celebrating his 23rd birthday today, Paul-Loup Chatin took over at the wheel and had advanced to the front of the field by the end of the race’s opening hour.

I’m thrilled to be the first driver to successfully defend the LMP2 class crown.

The battle for the lead intensified as one of the Ligiers came into the equation, but the Alpine A450b was again in command once the second sequence of refuelling stops had been completed. Having taken to the cockpit, Oliver Webb gradually extended the team’s advantage before handing the car back to Chatin for the final double stint.

However, a brace of penalties subsequently halted the progress of the Alpine A450b, with an initial stop-and-go (relating to the number of mechanics around the car during a refuelling stop) followed by an enforced three-minute pit visit (wheel spin in the pit lane) which sent the N°36 car tumbling down the order to sixth overall.

This meant that with under an hour of the race remaining, a re-think of the strategy was required, and Signatech-Alpine put all of its efforts into ensuring it scored the necessary points to be able to clinch a second consecutive title.

Chatin recovered fifth position and continued to match the pace of the fastest cars on the track as Alpine took the chequered flag as champion!

The fiercely-contested season ended with a fifth different winner at Estoril, an eloquent pointer to the high level of the most competitive championship for LM P2 prototypes.

Bernard Ollivier (Alpine Director): “The winning instinct that has long been an Alpine trademark ultimately triumphed! The team united and worked together to overcome several setbacks. It is a new lesson – the devil is in the detail – and it was two little details that cost us around four minutes. We really rolled up our sleeves and went out and fought for this second consecutive title. Each member of our young crew – with an average age of just 24 – demonstrated their maturity. Offering talented young drivers a chance to prove themselves is another Alpine tradition!”

Philippe Sinault (Team Principal, Signatech-Alpine): “I am very happy and proud of the work carried out by the entire team. Successfully defending a title is no mean feat, which makes the retention of our European crown all the more satisfying. We have made consistent progress while always being in the battle for victory and adopting – on each occasion – the optimum strategy. The final round put everybody to the test, but the whole team remained calm, as they have done since we achieved our podium finish at Le Mans. I must thank Alpine for placing its faith in us. Together, we have shared and continue to share some incredible moments and emotions. Sometimes it is tough, but that only adds to the challenge that we relish... Roll on next year!”

Nelson Panciatici: “Following a positive qualifying session, I made a good start in the race. I could perhaps have taken the lead going into the first corner, but with what was at stake, I preferred to play it safe. I was able to maintain a good rhythm without taking any risks and despite the two penalties, we were able to win the championship. I’m thrilled to be the first driver to successfully defend the LMP2 class crown. The team has demonstrated that it is strong and that the victory last year was no fluke.”

Paul-Loup Chatin: “What a race! I would say we have had a perfect season, and notwithstanding the errors in the final round, the level of performance was always there. Following the penalties, I needed to settle back down into a rhythm to hunt down the points that we needed. I’m over the moon and owe a big ‘thank you’ to the entire team, Alpine, Philippe, Nelson and Oliver. What we have created here is a very strong squad.”

Oliver Webb: “My team-mates produced two excellent stints at the beginning of the race, and I was able to maintain our advantage before the penalties came. That may have deprived us of victory at Estoril, but it couldn’t stop us from winning the championship! The podium in the Le Mans 24 Hours and now this European Le Mans Series title are two massive results for my first season in endurance racing. I just hope we will be able to keep this momentum going next year!”

The success represents Alpine’s third European crown following those achieved 40 years ago with the Alpine A441 and last year with the Alpine A450. Panciatici is the first driver to claim back-to-back titles in this class in the European Le Mans Series... Chatin, at exactly 23-years-old, becomes the youngest LMP2 class champion! Indeed, at the age of 23-and-a-half, Webb himself was not far from this record.

Beyond the evident joy of retaining its hard-fought crown, Alpine is also quick to offer all of its support to Jules Bianchi and those close to him. Jules is part of the Alpine family. His grandfather Mauro and great uncle Lucien were the first outright winners behind the wheel of an Alpine on a race circuit at the 1965 Nürburgring 500km with the Alpine M65. We have Jules in our thoughts as we celebrate this championship success.

European Le Mans Series (after round five of five)

A new ELMS title for the ORECA LM P2 chassis !