A new start for the European Le Mans Series

Long-time partners the Automobile Club de l’Ouest and Patrick PETER have agreed to modify the format of the organization, and the promotion of, the European Le Mans Series from 2013. 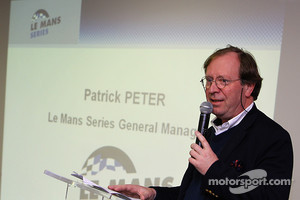 The Automobile Club de l’Ouest has a strong desire to better promote endurance racing and to guarantee a stable future for teams, has decided to become more involved in the ELMS. From next season it will take over the organization of this championship through its subsidiary partnership between the ACO and Peter Auto, Le Mans Endurance Management (LMEM), which already controls the WEC.

The mission of Gerard NEVEU, CEO of the WEC, will be increased to encompass the ELMS and he will have a strengthened team to help him.

As one of the active shareholders of this European Championship, Patrick PETER will become part of the ELMS Committee as he is for the WEC.

Pierre FILLON, President of the Automobile Club de l’Ouest: “With this decision, we are once again sending a strong signal to our partners, to constructors, and to the teams. We are shouldering our responsibilities. It is for the ACO to ensure it guarantees the best possible future for this series, considered to be one of the mainstays of our discipline. The ACO has invested a great deal in its Le Mans Endurance Management subsidiary in terms of organization of WEC events across the world, so there is legitimacy in increasing the scope of its mission. I would like to take this opportunity to reiterate how grateful we are to Patrick PETER for all the work done over the years.”

Patrick PETER, President of PETER AUTO: “2012 has been a very difficult season for the whole of the motorsport world, including endurance racing. We believe it is cyclical and that this move will not detract from the potential of Endurance in general and in particular the ELMS. For some time now, PETER AUTO’s activities have developed and increased, with many projects in historic racing. For better synergy, it therefore seemed logical to us to change around our roles and to bring closer together the organizational structures of the ELMS and the WEC.”

Gerard NEVEU, CEO of the Le Mans Endurance Management: “We are very aware of the additional responsibility which is being entrusted to us. Expectations are high and it will be a challenge. With the ACO’s expertise and the support of everyone in Endurance Racing, the LMEM teams will have all that’s required to reposition the ELMS in its proper place on the European stage. Economic constraints and the series’ prestige will be the essential parameters in our approach, and for the sporting programme we are proposing for the 2013 season.”

It should also be noted that the 2012 ELMS title will, for one time only, be decided at the USA’s Petit Le Mans at the Road Atlanta circuit in Georgia on 20th October. The seven cars in the running for the LMP2 and LMGTE titles will take the start. A 2013 provisional calendar, together with the sporting and promotional framework for the ELMS, will be announced in a few weeks.

Combined final for the ELMS and the ALMS