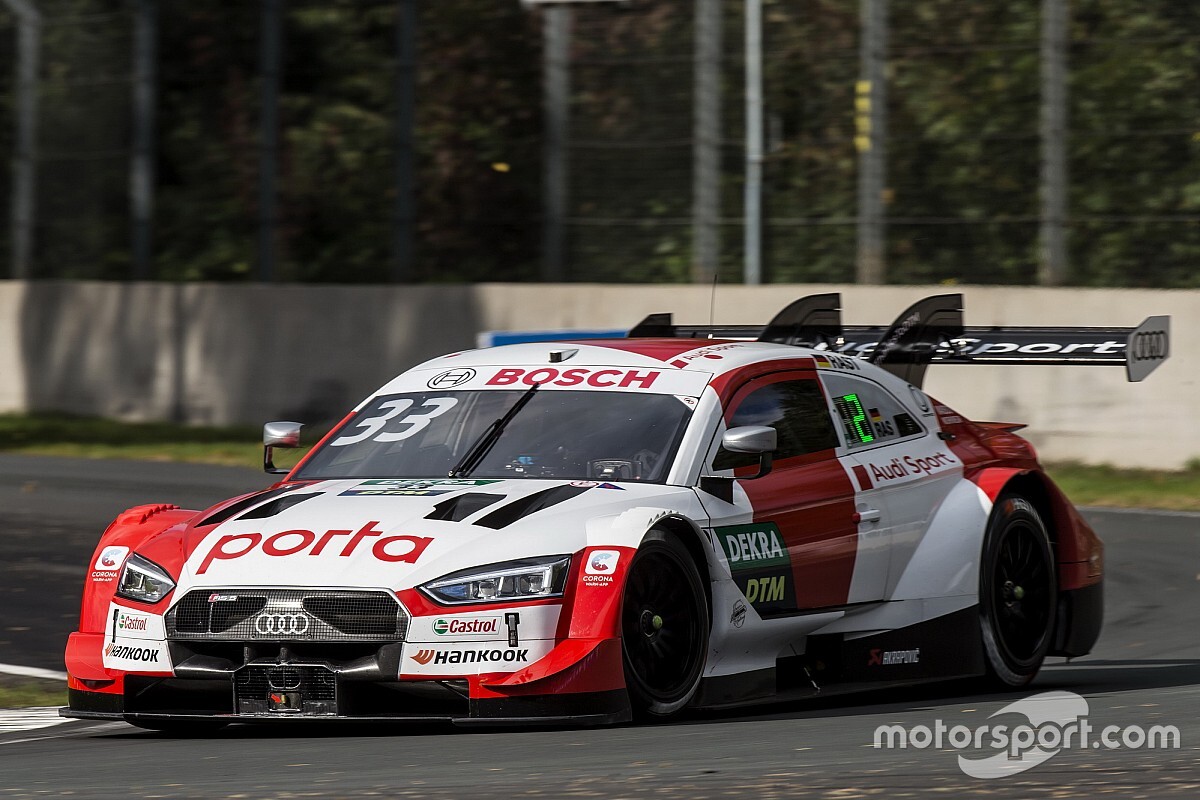 Audi driver Rene Rast put himself back in DTM title contention with a commanding victory in the first race at Zolder, as points leader Nico Muller recovered from a poor qualifying to take third.

At the start of the race, Rast made his characteristically quick getaway from pole position to hold station into Turn 1, while both Robin Frijns and Mike Rockenfeller cleared a slow-starting Timo Glock to move up to second and third respectively.

Frijns initially kept the pressure on Rast for the lead, but the two-time champion put the hammer down on lap 6, building a one-second lead over his Audi stablemate.

The gap extended to 3.5 seconds over the next seven laps and, when Frijns came into the pits on lap 17, Rast's lead had grown to nearly five seconds.

Rast followed into the pits one lap later and was greeted by a clear track, aided by Frijns dropping behind an early-stopping Glock.

Frijns managed to overtake the BMW of Glock heading into Turn 1 on lap 24, but by that time Rast had built a healthy eight-second gap out front, which proved to be too big for Frijns to bridge.

Rast eventually took the chequered flag with a winning margin of over 18s, scoring his third victory of the season - and the first since the second Lausitzring round in August.

Muller spent the first quarter of the race stuck behind the WRT Audi of Harrison Newey, who had made a rapid getaway from eighth on the grid to move up to fifth.

After failing to make a pass on track, Muller leapfrogged the Briton with an early stop on lap 10 and then overtook Glock around the outside of the final chicane on lap 32, claiming the final spot on the podium.

However, with both Rast and Frijns finishing ahead, Muller relinquished ground to both his chief rivals in the championship, his lead shrinking to just 14 points with five races still to run.

Glock held on to fourth place ahead of Newey, who had passed Marco Wittmann earlier on to record his best result of the season in fifth.

Sheldon van der Linde (BMW) was classified sixth, while Ferdinand Habsburg made it two WRT Audis in the top 10 for only the second time in 2020 by finishing seventh.

Mike Rockenfeller suffered a disastrous 26-second pitstop that dropped him firmly at the back of the pack, but the Phoenix Audi driver staged a stunning recovery to take eighth at the flag ahead of the BMW of Philipp Eng.

Rockenfeller's teammate Loic Duval picked up the final championship point in 10th after overtaking the BMW of Lucas Auer with just two laps to run.

Formula 1 convert Robert Kubica was last of the classified finishers in 14th after having to make an extra pitstop with 13 laps still to run.

Wittmann was running in sixth place when he was forced to peel into the pits with an apparent engine issue, while Audi's Jame Green also retired from the race after picking up damage in an incident with Eng.