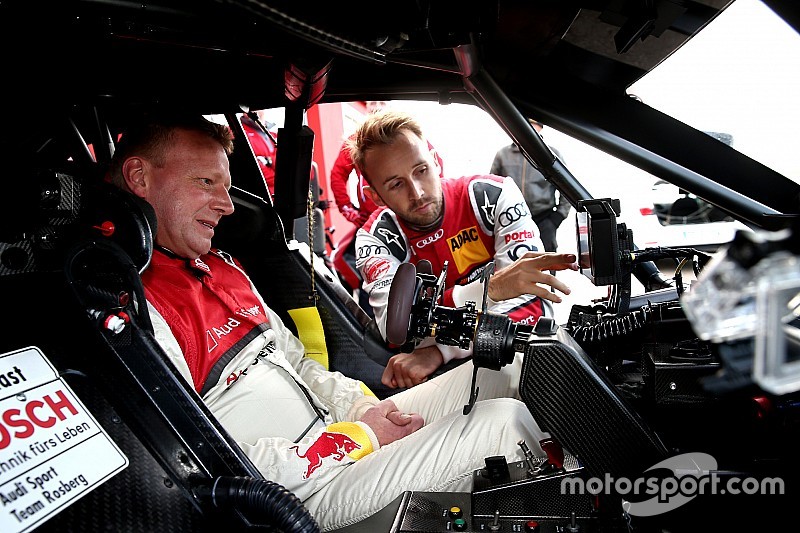 Motorsport.com Germany's DTM editor Roman Wittemeier recently had the ride of his life when he sampled Rene Rast's title-winning Audi RS5 in Mallorca. Here he shares his experiences of an unforgettable day.

Christmas came early this year for me, as on the last Tuesday of November, I received a special gift: the chance to drive the Audi RS5 DTM - indeed, the championship-winning car of Rene Rast.

My destination is Mallorca, the Germans' favourite holiday island. But while other tourists head to the beach in their rented Fiat Pandas, I'm headed for the Circuito de Mallorca, and my 'hire car' boasts more than 500bhp and the beautiful sound of a four-litre V8 engine.

Just a few minutes before my arrival at the circuit, the track is flooded after a downpour. The sun soon returns, but the track is not in fantastic shape. How can a clueless rookie hope to tame a fire-breathing DTM car in these conditions?

Rast tells me: "By the way, this is going to be the last time that my 'Joyce' will be driven on a track. Afterwards, she will be taken to the museum. Please be careful."

However, Rast is not allowed to drive in his DTM car due to the regulations of the championship - and these also apply during the winter. Instead, the champion hops in a Radical RS3 to dry the line.

Meanwhile, I'm getting dressed up in fireproof underwear, balaclava, gloves and race suit. The first challenge: getting into the car. "Bum on the frame, right leg into the leg room, head into the car, body and left leg afterwards", says Rast after returning to the pits.

In front of me now is the steering wheel with many buttons and three paddle shifts. There are millions of numbers on the display, literally a sea of lights. 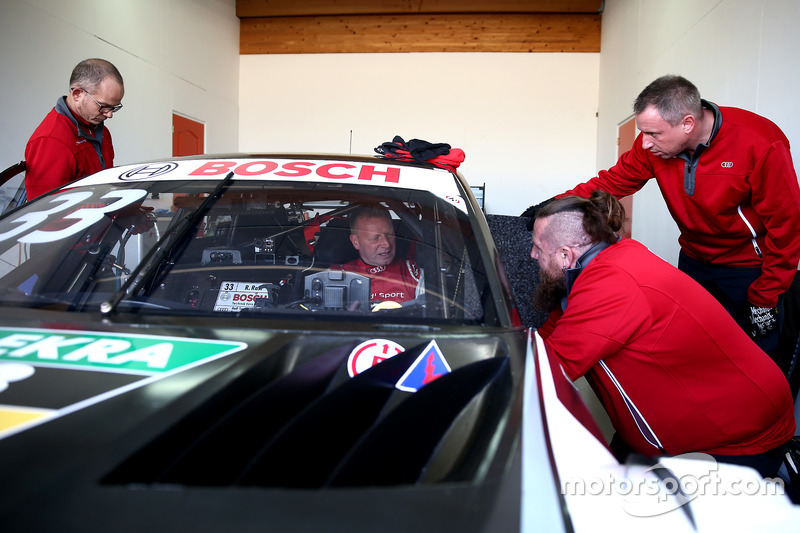 "I will explain to you the basics", says Rast. Here we go: main power switch "on" in the central console, ignition "on", step on the clutch and press the red starter button on the steering wheel. "It's clear what the paddle shifts on the left and right-hand side are used for, the big paddle shift for the DRS we don't need today", Rast adds.

In the middle of the dashboard the temperatures of tyres, brakes and so on are shown, as well as the laptime counter and the gear indicator. Blue LEDs on either side are there to indicate when and how much the tyres lock up during braking, a common problem on a wet track.

"There is another thing you should know", Rast continues. "Nobody has managed to stall the car at the start. It's a long pedal, you can start rolling without any throttle." The pressure not to mess up rises...

Suddenly, there is a jerk downwards, as the car is taken off the jacks. I'm pushed out of the garage, and the race engineer gives me the signal to start the engine. Main switch: check, ignition: check - push the starter button. A second later, the RS5 DTM's V8 heart roars into life.

A white Seat Leon is driving in front of me to the pit exit, with its tailgate open. I have to follow it so that they can take nice pictures of me on track. "Two laps behind the camera car and then you do one lap alone - carefully. Then you come back to the pits", I'm told.

I engage first gear and ease off the clutch; the car rolls on without any issues. The embarrassment of stalling is successfully avoided!

On the twisty circuit, I can only shift up as far as third gear behind the leading car and I can't go at full speed. But I have a big smile on my face when the Seat enters the pitlane and I'm alone on track. Just 'Joyce', the DTM championship-winning car, and me. 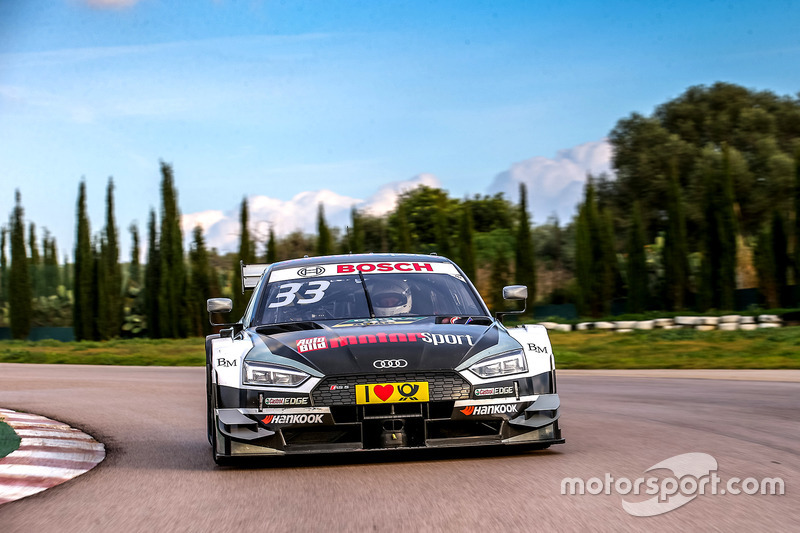 At Turn 4, a tight right-hander, the blue LEDs on the dashboard flash for the first time as the wheels lock up. "Holy s***", I say to myself, but it is still wet and very slippery.

Nevertheless, the front of the RS5 DTM remains very predictable and super stable. But the trickiest part of the track is still to come, Turns 10 and 11. There is a lot of water still, and no grip when accelerating. I carry the car carefully around the corners, but I am braver now.

Exiting Turn 12, I stamp on the throttle and the rear squirms. The car heads towards the wall on the right-hand side, but with some quick countersteering I save it. Now, carefully back to the pits...

When I enter the pitlane, a mechanic is waving to show my pit spot. The team pushes the car into the garage and the tyres are taken off. Rast appears next to me and says: "That wasn't too bad. Now we'll heat up the tyres to 60 degrees and you can drive out again. Any questions?"

After a few minutes the car is back on the ground. Time to go again! 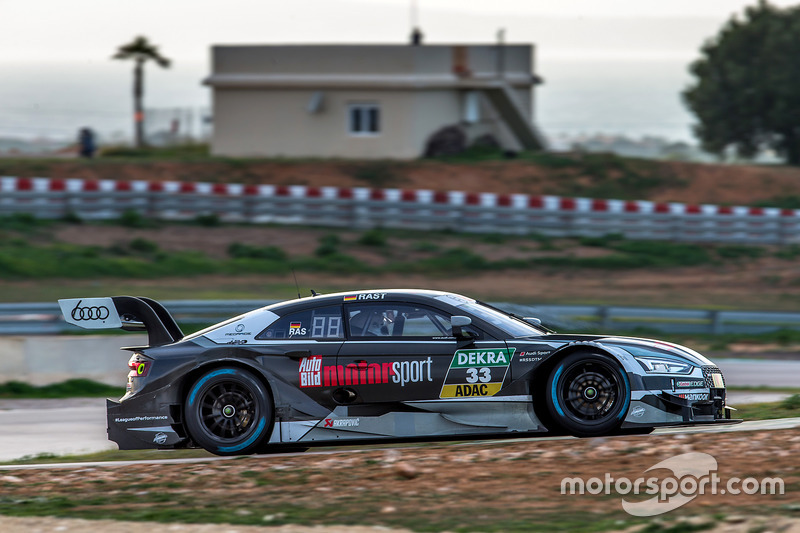 I am more confident to start, but soon I lose the courage to test the limits. I'm getting on the throttle earlier here and there, but I'm still getting a lot of wheelspin even in third gear. The rear is getting slightly nervous. The blue LEDs are telling me when to stop.

After three laps, I settled into a rhythm; at this speed, the Audi RS5 is driveable for a rookie like me. "Don't break anything," says a voice in my head. The chequered flag is shown some laps later. Smiling and shaking my head, I'm bringing 'Joyce' home.

I had to carefully tread the line between pure driving joy and the responsibility of giving Rast's car its final laps on track. Thank God nothing went wrong!

Despite my caution, it was an unforgettable experience that will stay in my memory forever. To drive such a car on the limit demands great courage, skill and an innate trust in the car. To do all that while fighting against - and beating - 17 other top drivers is incredible.

Hats off to you, Rene Rast - and thank you Audi Sport for an intensive insight into the world of racing! 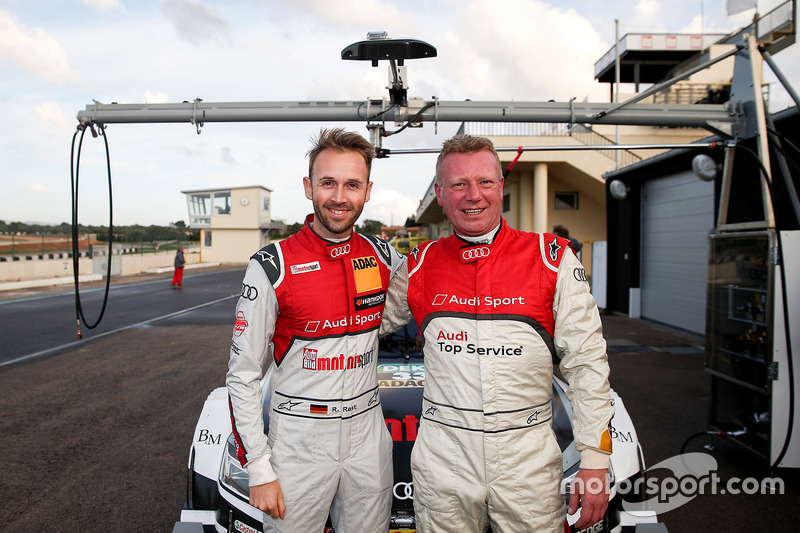