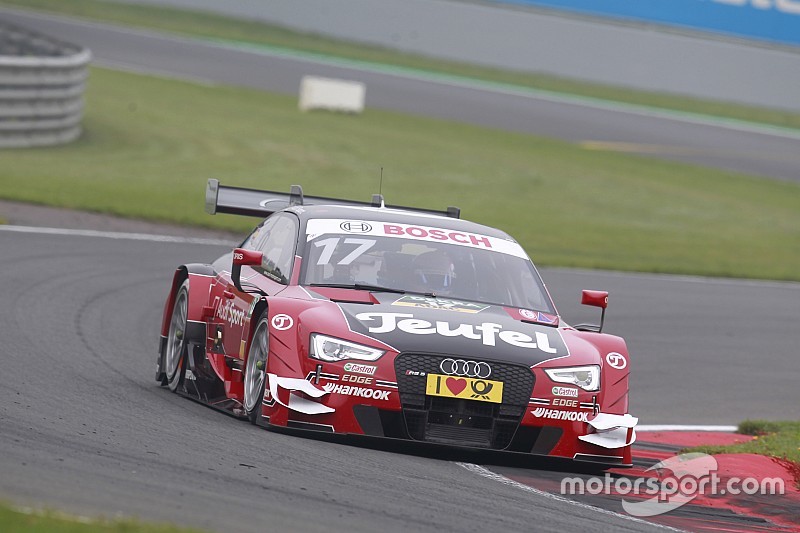 Only Miguel Molina in the points

The first of the two DTM races at the Motorsport Arena Oschersleben ended in disappointment for Audi: only Miguel Molina in ninth place scored two points on Saturday.

Following seven victories in the first twelve races, the Audi drivers this weekend have to start with high additional weights which, according to Audi Sport simulations, cost up to six tenths of a second compared to the lightest cars in the field. The consequence: Molina in ninth place was the best Audi driver in qualifying. This was the position the Spaniard in the Teufel Audi RS 5 DTM of Audi Sport Team Abt Sportsline retained in the race as well. “More was simply not possible today,” said Molina. “Still, the two points are a nice reward for my mechanics who managed to repair my car in time for the race following my accident in qualifying. I’d like to thank them for that!”

Hopes for a better result for the brand with the four rings ended just seconds after the start. In turn one, the tussles typical for Oschersleben ensued, in which the Audi RS 5 DTM cars of Mike Rockenfeller (Schaeffler Audi RS 5 DTM), Edoardo Mortara (Castrol EDGE Audi RS 5 DTM), Jamie Green (Hoffmann Group Audi RS 5 DTM) and Nico Müller (Audi Financial Services Audi RS 5 DTM) were heavily damaged. All four Audi drivers returned to the pits early during the race in order to give their mechanics more time to prepare the cars for race two on Sunday.

Timo Scheider in the AUTO TEST Audi RS 5 DTM on his return to the DTM advanced from grid position 19 to twelfth place. Adrien Tambay in the Playboy Audi RS 5 DTM finished the race in 17th place.

Following an electronic issue on his Red Bull Audi RS 5 DTM in qualifying, Mattias Ekström had to start the race from the last row on the grid. From position 23, the Swede recovered to 14th place and in the overall standings is now trailing Mercedes driver Pascal Wehrlein by four points. In the manufacturers’ classification, Audi maintained the lead on Saturday by a narrow margin ahead of BMW and Mercedes-Benz.

“We knew that due to the performance weights we’d be having a very tough time here,” said Dieter Gass, Head of DTM at Audi Sport. “When you start from midfield, you’re obviously in a very vulnerable position – especially here at Oschersleben. We could see that again today. The only consolation is that we’re reducing weight. But this won’t have an effect until the next race weekend at the Nürburgring.”