The man who still reaches for the gold may not be active as a race car driver but the determination and desire that Alex Zanardi has is one of the reasons we at Motorsport.com believe that he fits our Top Moments of 2012.

While not directly tied in to motorsports, it would be ludicrous to overlook former CART Champion, Alex Zanardi’s success at this year’s Paralympic Games in London. Zanardi famously cheated death to survive a terrible crash in 2001 at the Eurospeedway Lausitz in Germany that cost him his legs. Not only did he survive, two years later Zanardi made an emotional return to the Eurospeedway in a specially modified CART machine to finish the 13 laps that were taken from him. Not holding anything back, the Italian attacked the track with his old vigor and aggression, reeling off a lap time that would have placed him 5th on the grid at that weekend’s CART event. 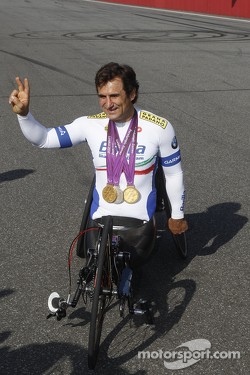 Alex Zanardi, with his hand bike

This prompted a second racing career of sorts and in 2004, Zanardi made his World Touring Car Championship debut kicking off a successful seven year stint in touring cars which would see him take a pole position, record four fastest laps and score four victories for BMW Team Italy-Spain.

Zanardi made the decision to step away from a full time motorsport career following the 2009 season. He then turned his attention to paracycling with his goal to compete and win in the 2012 Paralympic Games in London for the Italian hand cycling team. Along the way, in a fashion we had grown accustomed to in his CART days; Zanardi would rack up victories at the Venice, Rome City and New York City Marathons.

This past summer, Zanardi achieved his Paralympic Games goals and in the process inspired us all over again by taking Gold in the Individual H4 time trial event and the Individual H4 road race. Zanardi capped off his incredible Paralympics by winning the silver medal in the Mixed H1-4 Team Relay and earning a spot on the International Paralympic Committee’s “Top 12 Performances” list of the London games. 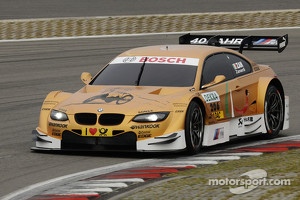 Shortly after his gold medal winning performance, Zanardi was offered the chance to enter the cockpit of a special golden BMW M3 DTM car to turn laps at the historic Nürburgring. He felt “at home” in the M3 and ended up touring the circuit for 32 laps. That left to the ongoing rumors that he might return to auto racing. However, no matter what challenges the Italian takes on in life, we all will cheer him along on the road to victory.