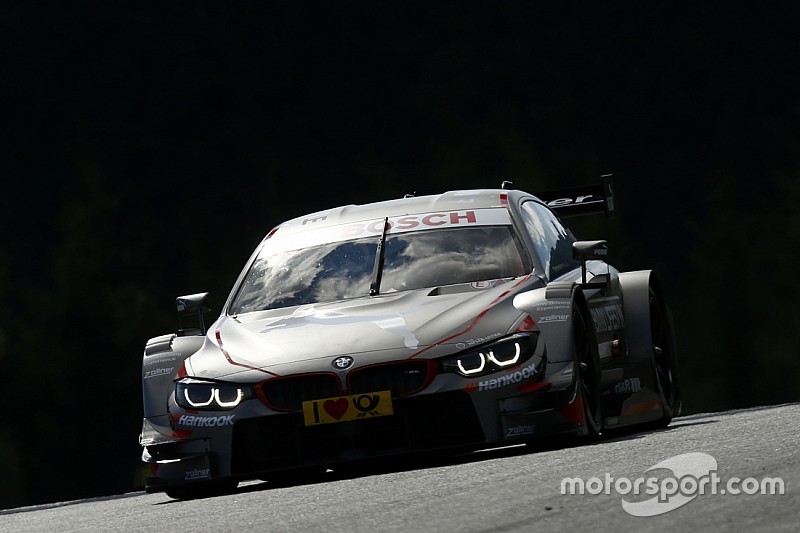 Top-four lock-out again for BMW on Sunday in Oschersleben.

Oscherleben (DE) –  It took Tom Blomqvist (GB, BMW M4 DTM) just 14 races to join the list of DTM winners in his rookie season: the BMW Team RBM rider led from start to finish to win Sunday’s race in Oschersleben (DE) in emphatic style. Blomqvist got off to a flying start from second on the grid, passing his team-mate Augusto Farfus (BR, Shell BMW M4 DTM) by the first corner and then wasting no time in pulling clear of the rest of the field.

At the end of the 60-minute race at the “Motorsport Arena”, one thing was clear: at just 21 years of age, Blomqvist is the youngest BMW winner in the DTM ever. Only Pascal Wehrlein (DE, Mercedes) has triumphed at a younger age. BMW claimed its 68th victory in the DTM.

Jens Marquardt (BMW Motorsport Director): “That was a sensational first win by our DTM rookie Tom Blomqvist. To find his feet so quickly in his first year, and to win a race in such dominant fashion, deserves the utmost respect. He is also one of the youngest winners in DTM history. Augusto Farfus also enjoyed a very impressive race, meaning BMW Team RBM was able to repeat the achievement of BMW Team MTEK yesterday and claim a one-two today. Marco Wittmann completed an all-BMW podium, while a further four BMWs finished in the top ten again. I am very happy with the outcome of the weekend here. We were able to make the very most of our opportunities, right across all the teams. I would like to pay a huge compliment to the entire team. I hope Lucas Auer is okay after his big crash.”

Bart Mampaey (Team Principal, BMW Team RBM): “This is an unbelievable result for our team. Both cars were fast on Saturday, but we managed to get the maximum out of the package on Sunday. I am really pleased for Tom Blomqvist, as it is a really exceptional effort to win a race in your rookie season. I am also very happy for Augusto Farfus. I would like to say a big thank you to BMW Motorsport and every single member of our team. We have worked extremely hard to get back to winning ways in this incredibly evenly-matched racing series. And we have now done that with a one-two. This is a very special day.”

Tom Blomqvist (BMW Team RBM, 1st place): “I am incredibly happy. This is perhaps the biggest day of my career so far. To win a race in my rookie season is fantastic. I noticed at the start of the season just how difficult it is to be successful in the DTM. Now everything came together this weekend and I managed to take the opportunity. It has made me hungry for more success.”

Augusto Farfus (BMW Team RBM, Sun: 2nd place, Sat: 4th place): “I am very happy with this weekend: I scored 30 points and made a big move up the Drivers’ Championship standings. I am also very pleased for Tom Blomqvist. He literally flew round the track, and deserved his first win. I had slight problems with the clutch at the start, and had to let him past. It is fantastic that we ended up with a one-two for our team.”

Marco Wittmann (BMW Team RMG, Sun: 3rd place, Sat: 6th place): “That was a dream result for me today. I got off to a superb start, immediately passing two of the cars in front of me. After the pit stop, I put António Félix da Costa under pressure and was able to overtake him. Our goal was to finish on the podium. We achieved that with third place. Today we have good cause for celebration after the second top-four lock-out for BMW. Congratulations also to Tom Blomqvist on his first DTM win. That was a great performance from him.”

António Félix da Costa (BMW Team Schnitzer, Sun: 4th place, Sat: 3rd place): “That was one of my most difficult races this season. It is not easy to keep someone as fast as Pascal Wehrlein behind you, but I did not make any mistakes and so was able to defend my position. Unfortunately I was not quite able to match the pace of my fellow BMW drivers up front, which meant I was unable to finish on the podium. All in all, however, it was a very good and consistent weekend for me. That is something I can build on. Congratulations to Tom Blomqvist on winning in his rookie season.”

Timo Glock (BMW Team MTEK, Sun: 7th place, Sat: 1st place): “Our pace on Saturday was better than on Sunday. However, we finished in the points again. That was a good performance. But Saturday’s victory was obviously awesome. Thank you very much to my team for this fantastic weekend. Congratulations to Tom Blomqvist on his win. He drove like someone from a different planet today. Generally speaking, BMW once again made the most of its opportunities. I now hope we will also be quick at the Nürburgring. We will certainly do our very best.”

Maxime Martin (BMW Team RMG, Sun: 9th place, Sat: 11th place): “On Sunday we had the pace to finish further up the field, but unfortunately I got stuck in the middle of the pack after a good start. I also lost a position during the pit stop. Considering that, to finish in the points having started from 14th on the grid is a good result. The speed of the car seems to be back. Congratulations to my fellow BMW drivers on their podium finishes.”

Bruno Spengler (BMW Team MTEK, Sun: 10th place, Sat: 2nd place): “I actually lost Sunday’s race in qualifying, when I was held up. That meant I had to start from down in tenth place on the grid. From there it is impossible to make up many places on a track like this, on which it is nearly impossible to overtake. What’s more, the pace of my car was not as good on Sunday as it was on Saturday. Looking ahead to the rest of the season, we have to make sure that our speed is more consistent.”

Martin Tomczyk (BMW Team Schnitzer, Sun: 20th place, Sat: 8th place): “That was obviously a disappointing end to that race. I had a fantastic start and could have scored a lot of points today. Unfortunately, that was all destroyed by a drive-through penalty. All in all it was another tough weekend for me. Congratulations to BMW and my fellow drivers on this weekend’s two top-four lock-outs.”