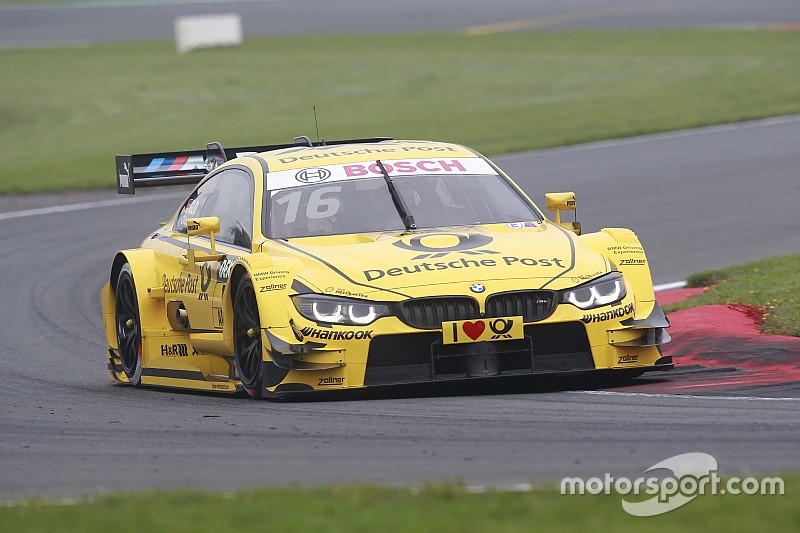 Oschersleben (DE) - Timo Glock (DE) claimed the second victory of his DTM career in race 13 of the season in Oschersleben (DE). At the end of the 28-lap race, the BMW Team MTEK driver in the DEUTSCHE POST BMW M4 DTM crossed the finish line 1.876 seconds ahead of team-mate Bruno Spengler (CA, BMW Bank M4 DTM). Glock led from start to finish, having secured pole position for the first time since making his debut in the DTM. His first DTM victory came in the final race of the 2013 season in Hockenheim (DE).

The victory was BMW’s 67th in the DTM, while BMW Team MTEK and its principal Ernest Knoors (NL) celebrated the first one-two in the team’s history. António Félix da Costa (PT) joined Glock and Spengler on the podium, finishing on the bottom step of the podium for the third time this season in the Red Bull BMW M4 DTM. Augusto Farfus (BR, Shell BMW M4 DTM) completed the top-four lock-out for BMW at the “Motorsport Arena”.

Jens Marquardt (BMW Motorsport Director): “This is a fantastic result for us. We were very strong when we tested here, and were able to underline that strength today. Timo Glock produced a great, flawless race to claim his second victory in the DTM. He was unbeatable today. Bruno Spengler, António Félix da Costa and Augusto Farfus also performed strongly to finish in second to fourth places. This was the first one-two for BMW Team MTEK and all four BMW teams had drivers in the top six. A further three BMWs in the top ten round off a dream result for us – and in front packed stands. We don’t have much time to celebrate today. We are back in business tomorrow and hope to achieve a similar result.”

Timo Glock (BMW Team MTEK, 1st): “This victory feels fantastic. It was hugely enjoyable to drive the car today. However, I had to push in the race. I wanted to get out of the DRS window as soon as possible, to avoid the threat posed by my team-mate Bruno Spengler. I fought like a lion all race and was rewarded with my second DTM win. I am pleased for my team that our work has finally paid off and we even managed a one-two. The guys deserved that.”

Bruno Spengler (BMW Team MTEK, 2nd place): “You don’t get to celebrate a one-two every day. This is a great result for my team. Congratulations to Timo Glock on his second DTM win. The whole performance from BMW was fantastic today. Everything went perfectly for us. I scored a lot of points and am now back in the title race in the Drivers’ Championship. We must still keep our feet on the ground but we have every reason to celebrate today.”

António Félix da Costa (BMW Team Schnitzer, 3rd place): “I was able to get the maximum out of our package again today. It feels great to be back on the podium. Congratulations to everyone at BMW Motorsport on this fantastic result. We will do our best to repeat today’s performance tomorrow.”

Augusto Farfus (BMW Team RBM, 4th place): “The race was okay. Unfortunately I locked up in the first corner and dropped back a bit. That cost me a place on the podium. Generally speaking, however, the pace of our car is outstanding. I think we can be in contention for a place on the podium again on Sunday.”

Marco Wittmann (BMW Team RMG, 6th place): “Unfortunately seventh place in qualifying, when I was held up a bit by an opponent, was not good enough for me to be able to set my sights on the podium here. It is very difficult to overtake here, so I had to settle for sixth. Congratulations to Timo Glock, Bruno Spengler and BMW Team MTEK on the one-two.”

Tom Blomqvist (BMW Team RBM, 7th place): “I actually got off to a good start, but found myself on the outside in turn one and had to go very wide to avoid a collision. Unfortunately that cost me a few places, which was obviously a great shame. My speed was excellent, so I could have finished much higher.”

Martin Tomczyk (BMW Team Schnitzer, 8th place): “The car felt far better in qualifying than it did in the race. For some reason I had hardly any grip and was not quite able to match the pace of my fellow BMW drivers. Congratulations to everyone on this fantastic result for BMW.”

Maxime Martin (BMW Team RMG, 11th place): “It is very difficult to work your way forward from the middle of the pack at this circuit, as it is nearly impossible to overtake. As such, my problems started in qualifying. I then had some contact with other cars in the first corner. That did not exactly help.”