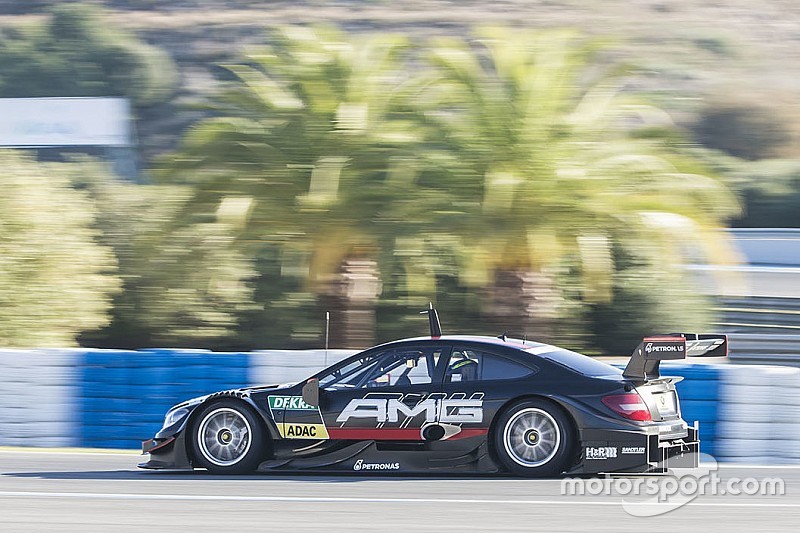 Whereas Jazeman Jaafar, Mikkel Jensen, Marvin Kirchhöfer and Kevin Magnussen were getting behind the wheel of a Mercedes-Benz DTM car for the first time this week, the other two members of the group already had varying degrees of experience at this level: Maro Engel who contested 42 DTM races for Mercedes-Benz between 2008 and 2011, and Raffaele Marciello who took a DTM test with Mercedes-Benz after winning the 2013 FIA Formula 3 European Championship.

On Monday, it had been the turn of Sebastian Asch and Luca Ludwig to put the DTM car through its paces on the Jerez de la Frontera track. The test was a reward for their achievements in the AMG Customer Sports Programme. The joint ADAC GT Masters Champions of 2015 had to share their session in the 2015 DTM championship-winning car with their fathers, former DTM stars Roland Asch and Klaus Ludwig.

Maro Engel: "First of all, many thanks to the Mercedes-AMG DTM Team for this test opportunity. It was marvellous to be driving a current DTM car again after an absence of four years and to see the advances that the DTM has made in the meantime. I'm very impressed. The test was a lot of fun and was definitely a great experience. I enjoyed every lap in the car and got more and more accustomed to it with every lap."

Jazeman Jaafar: "It was a very special day for me to be allowed to drive a DTM car bearing the Mercedes-Benz badge. It was most enjoyable. The downforce and also the way the team work are very special. I completed my programme and learned a lot in the process. Hopefully, I can have similar experiences more often."

Mikkel Jensen: "That was a wonderful day. This was my first time out in a DTM car and my first drive ever at the wheel of such a powerful car. Everything was new to me, but I got used to it quite quickly and had a lot of fun. Many thanks to the Mercedes-AMG DTM Team for giving me this opportunity. I hope I can get to drive it again soon."

Marvin Kirchhöfer: "This DTM test was a very interesting and new experience for me. It was extremely enjoyable to drive the car. Obviously, I first had to get used to the handling, but that got better as the day progressed. I am very grateful to Mercedes-Benz for giving me this opportunity, and I hope that I'll be able to build on it in future."

Kevin Magnussen: "It was a really good day, and the test was a lot of fun. The DTM is a completely new experience for me. So far, I've always driven single-seaters. Consequently, it was a totally new experience to test a touring car. The car has very high downforce and much more grip than you would expect. I can imagine that racing in one of these cars is really enjoyable."

Raffaele Marciello: "It was a great experience to be able to drive the DTM car. I haven't been to Jerez before, but I like the track a lot. It was a bit difficult getting used to the car at first, but it was nice to feel so much downforce and be able to go to the limit on every lap without worrying about excessive wear on the tyres."

Ulrich Fritz, Head of Mercedes-AMG DTM: "The week of testing in Jerez de la Frontera was a wonderful opportunity to give six incredibly committed and above all superfast racing drivers a chance to test our Mercedes-AMG C 63 DTM. They all performed magnificently and worked very well with our engineers. Before the younger generation got their chance on Monday, two experienced old-timers had their turn, and it was a special treat to sense the sheer delight of Roland Asch and Klaus Ludwig at being allowed to drive a DTM car again after so many years and also their reluctance to vacate the cockpit. The old adage holds true: once a racer, always a racer."

Hungaroring in for Oschersleben in 2016 DTM calendar