Rast’s two-stop Hockenheim victory was his “craziest race ever” 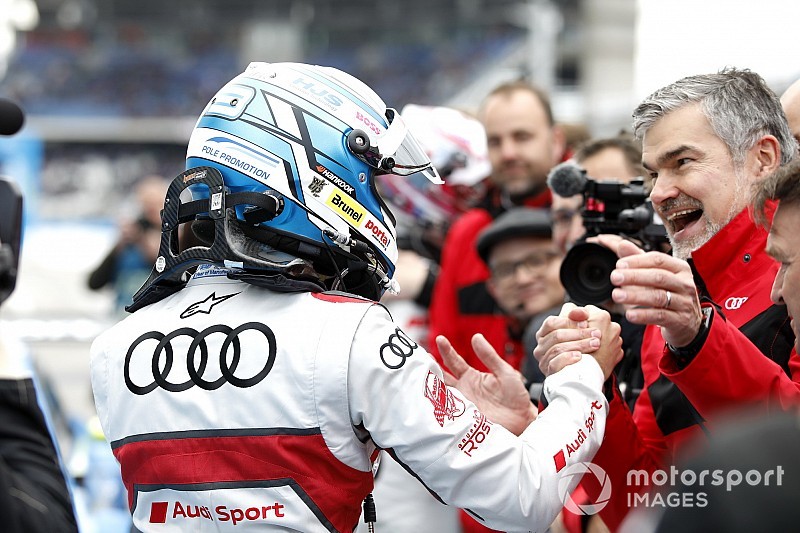 Audi DTM star Rene Rast has described his win in the opening round at Hockenheim as “one of my craziest races ever” and says he was lucky that an Audi stablemate caused the safety car that transformed his race.

Rast, the 2017 champion, started down in 16th position on the 18-car grid because of a fuel-system problem on his RS5 DTM in qualifying. An inspired call brought the Team Rosberg driver into the pits on the eighth lap when the race went under safety car to retrieve the Audi of Loic Duval from the Sachskurve gravel trap.

Although Rast could not count this pitstop as his mandatory stop because it was under caution, it gave him a fresh set of tyres with which he raced through the field and established an impregnable lead. Following his second, mandatory pitstop, Rast led home Audi stablemates Nico Muller and Robin Frijns in a 1-2-3 for the manufacturer.

“It was one of my craziest races ever I would say, starting from 16th and winning the race,” said Rast. “Obviously it was a very aggressive strategy, stopping under the safety car and getting new tyres.”

With the race only remaining under caution for one lap, Rast and fellow pitter Paul di Resta’s Aston Martin only just caught the pack as they restarted, so it was a tight call.

“The safety car just stayed out for one lap and then I had to hurry a bit exiting the pitlane to catch the train,” explained Rast. “At the start-finish I was lucky enough to be just there and made a good start and could pass some cars, and then on the new tyres it took me three or four laps until I got through the field.

“It was a great strategy of the team, everyone did a great job today and I’m very grateful to take victory after the bad day yesterday.”

Rast explained that the two-stop strategy was always regarded as a potential tactic, and joked that Duval’s off was not deliberate.

“We always had it in mind,” he said. “When you are P16, or somewhere outside the top 10, always you have to gamble and this time we knew if there was a safety car this was our chance to make up positions. We spoke about it beforehand and in the end we were just lucky it happened like we hoped.

“It was for sure not planned – it was not the plan that Loic was in the gravel!”

Rast still had to overtake 14 cars to get back into the lead on his fresh tyres, and when asked by Autosport about that risk on a chaotic DTM double-file restart he said: “Two times I was just missed by a few centimetres by cars spinning in front of me. Marco [Wittmann] got turned around, and somebody else spun in front of me and I had to avoid them as well.

“So there was a bit of chaos, and I think on track I passed five cars – not more. The rest of the places I got from spinning cars in front of me, which is lucky, but sometimes it’s like that.”

Hockenheim DTM: Rast charges from back to seal epic win for Audi