After a strong second-place result in the opening race of the weekend behind Red Bull’s Nick Cassidy, Rast was again on course to finish as the highest-placed championship contender in Sunday’s second contest as he ran fifth after his pitstop.

But the track started to dry out rapidly in the closing stages of the race, putting the wet-shod Abt Audi of Rast on the back foot. As drivers who had gambled on slick tyres started charging through the field, Rast had no pace to hold his position and slipped to 11th in less than a handful of laps.

Reigning champion Maximilian Gotz was later handed a 30-second time penalty for a pitstop infringement, promoting Rast up a place in the final order, but the German driver was left with only a solitary point to show for his efforts.

With championship leader Sheldon van der Linde drawing a blank on a torrid weekend for BMW, the race is seen as a lost opportunity for Rast to bridge the gap to the South African and boost his chances of a fourth DTM title with Audi.

Speaking after the race, Rast explained that he had to take the championship picture into account while choosing his strategy, and the rain tyres had appeared to be the safe bet when he stopped on lap 21 of 35.

"When you fight for the championship, you always try to keep an eye on the opponents and not take exorbitant risks. You do what the competition is doing," the 35-year-old told Motorsport.com’s sister title Motorsport-Total.com.

“Things looked good for a long time and we were fifth. Only then was the track suddenly so dry that the cars with slicks came from behind and then really overtook me in the last corner, which knocked me out of the points [until Gotz’s penalty].

“Today we played it safe and unfortunately we were punished for it in the end.”

The second race at the Red Bull Ring saw a wide range of strategies as the action began in wet conditions before the track started drying out, with a late drizzle on the final lap complicating matters even further.

HRT driver Luca Stolz finished second after making an early pitstop on lap 7 for wets to run in clear air, while polesitter Maro Engel switched to slicks late on to snatch the final spot on the podium.

Rast, however, felt both strategies had their own risks and the best possible option for him was to extend his first stint and then take on a fresh set of wet tyres.

"If you had stopped early, there was a risk that it would really dry out and then you would have had to switch to slicks again,” he explained.

“We didn't want to take that risk. That's why we drove a little longer and of course observed all the competition and what the others were doing. Then we drove on and were virtually overtaken by many who stopped early.

"We might have done two or three laps longer and then switch to slicks. But it was so difficult because there was no dry track before the pit stop window [was closed]."

Auer wouldn’t have “dared” to switch to slicks

Winward Mercedes driver Lucas Auer was one of the first drivers to gamble on slick tyres after coming into the pits just two laps after Rast’s stop, having been told by his race engineer over team radio that "we'll only score points with slicks today.” 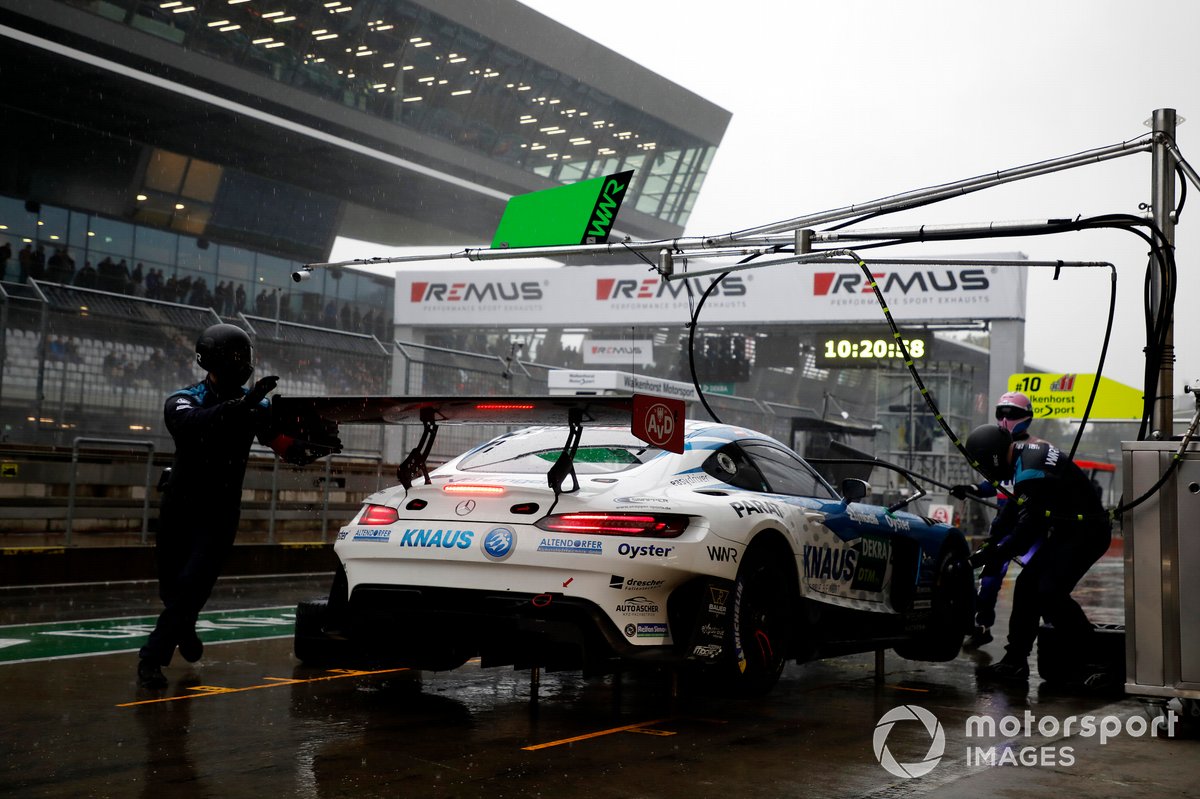 Although Auer fell as low as 21st after struggling on a track that was still wet at most places, the complexion of his race soon took a turn for the better and he climbed up to sixth at the finish.

The eight points he scored elevated him to second in the championship, one point clear of Rast and only 11 adrift of Schubert BMW’s van der Linde ahead of the title decider at Hockenheim.

Auer said he wouldn’t have switched to slick tyres if he was making the call, but it soon became clear to him that the team had put him on the right strategy.

"That was the perfect decision,” the Austrian told Motorsport-Total.com. "I wouldn't have dared to do that. But that was the only chance we had to pull something off today.

"I almost flew off at least three times on the first lap after the pit stop. But when the tyres then reached operating temperature, I knew: we did the right thing.

"Fourth place on Saturday was like a victory for us with the speed we had. Only Sunday in the rain I didn't deliver in qualifying. That was shit, I have to say. Also from me - just not enough.

“That's why I'm happy with the race now."

The top five drivers are separated by just 16 points going into Hockenheim, with van der Linde sitting at the top on 130 points, Auer second on 119, Rast third on 118, Thomas Preining fourth with 116 and Mirko Bortolotti fifth with 114 points on board.

More from
ABT Motorsport