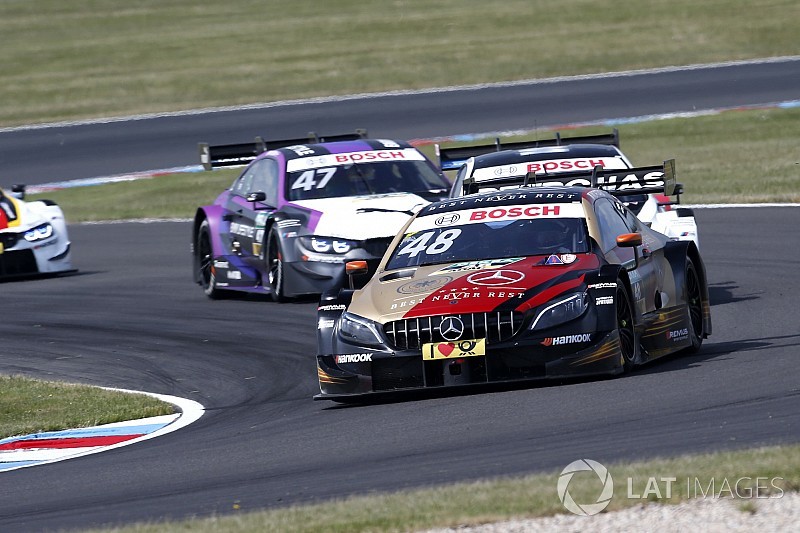 Edoardo Mortara scored his first DTM win for Mercedes at the Lausitzring, a race punctuated by two huge crashes – the worst of which saw Rene Rast walk away from a huge backflip rollover.

Mortara enjoyed a perfectly-timed late pitstop, which put him out in front, but he still had to fight for it from there.

“What a crazy race,” said Mortara. “I was very lucky, the team did an incredible job strategy-wise. I was struggling on the first laps after my pitstop.”

From pole position, Lucas Auer (Mercedes) swerved across the grid to cover the fast-starting Philipp Eng’s BMW, barging him into the pitwall. That allowed Bruno Spengler’s BMW to grab second place from Eng, who had to lift, into Turn 1.

The race was almost immediately neutralised as Jamie Green’s nightmarish start to the season continued as ploughed into the back of the stalled Nico Muller on the startline, taking both Audis out of the race before the first corner.

Green said: “I had a good start, and that caused me the problem, because I was so close to Rene [Rast, his Team Rosberg teammate], that I had no time to react. Then I just hit it; nothing I could do.”

Then the race was red flagged, as Rast suffered a huge accident when he was tipped sideways by Loic Duval. The car dug in on its right side and then flipped over violently – tearing the roof and windscreen from the car, showering him with dirt.

Once he had kicked the remains of the shattered body panels away, Rast was able to climb out unaided.

He said later: “I’m very good actually, I didn’t feel anything from the crash. It was a very soft landing, just my right elbow hurts a little bit. I’m fine, no shock moment. When I jumped out I knew everything was OK.”

After a break, the race was restarted under the safety car – essentially for a 20-minute sprint to the finish with a mandatory pitstop. At the rolling start, Auer clung to his lead, ahead of Spengler and Eng. Glock just held off Wehrlein for fourth. At this point, Mortara was only seventh.

Spengler, Eng and di Resta dived for the pits at the first opportunity, with Auer and Wehrlein pitting on the next lap. Auer’s stop was a slow one, with Wehrlein exiting ahead of Spengler but on cold tyres, so he fell back – and lost a place to di Resta too.

Leader Glock pitted with 12mins remaining, just as Eng passed Spengler at Turn 1. Glock rejoined at the front, weaving violently to warm up his tyres.

Auer attacked Glock at Turn 1, but both ran wide, allowing Eng to pass them both. But the canny Mortara had timed his pitstop to perfection with 10mins to go, putting the Mercedes man out in front.

Eng forced his way past Mortara at Turn 2, but Mortara had more DRS options available, and reattacked in the closing stages. He sliced past Eng to hit the front with a couple of minutes remaining.

Glock came back into the picture too, using DRS to pass Eng at Turn 1 to claim the runner-up spot, with rookie Eng claiming his first DTM podium in third.

Rast under observation in hospital after huge crash